Ketamine, a psychedelic relic from the 1960s, has gotten a bad rap over the past few decades as a teenage party drug. But that’s all starting to change. In addition to a growing body of research demonstrating the drug’s effectiveness as a treatment for pain, anxiety, and depression, researchers have also started to look at how this old drug could be transformed by a very modern technology: virtual reality.

How Does Ketamine Work in the Brain?

As far as anesthetics go, ketamine is among the safer ones. Originally developed as an anesthetic by Yale Chief of Psychiatry John Krystal in 1962, ketamine can be used to sedate patients without bringing their breathing or blood pressure down too low. For this reason, ketamine is often used to treat animals and children, and it was even used in the rescue of a boy’s soccer team from caves in Thailand in 2019.

Ketamine works in a few different areas of the brain, including dopamine receptors like those triggered by more addictive drugs, such as cocaine. However, its signature move is to affect the brain’s production of glutamate, a neurotransmitter that neurons release to communicate with each other. On higher doses of ketamine, like those used for sedative purposes, glutamate production is halted.

But at lower doses, ketamine actually amps up glutamate production. This dosage not only causes dissociation (feeling outside of your body) and hallucinations but can also fire off previously dormant neurons or create new neural connections altogether.

It’s this kind of ramped up neurological activity that makes ketamine a prime candidate for treating depression. Today, ketamine clinics are popping up all around the country to treat patients with neurological pain, as well as anxiety, PTSD, and medication-resistant depression.

At these clinics, patients lie back in a controlled, white-walled environment and receive a low-dose infusion of the drug into their bloodstream for an hour or longer.

Where virtual reality meets the psychoactive mind is a place Dr. Carl Bonnett, founder and medical director of the ketamine infusion company Klarisana, wants to explore.

“There are two schools of thought about how (ketamine) works,” says Bonnett. “One school of thought is that it’s purely a biochemical thing — you give ketamine, it hits the receptors, and it improves somebody’s mood or PTSD. Now, the other school of thought is that, yes, there is a biochemical component, but the ‘psychedelic experimental’ kind of stuff is not a side effect but that is actually part of the therapy, part of the treatment.”

In a small pilot study conducted at Klarisana locations across the southwest, Bonnett and his team wanted to see if ketamine therapy could be improved by designing a special VR environment for the patient to experience it, a technique they call Virtual Dissociative Remodeling (VDR). These virtual environments are designed to be tranquil, like a mountaintop in Tibet or a flight through a valley, but he says they also have to work closely with patients to see what they like, because what can be calming for some can be alarming for others.

Too little stimulation can act as a blank slate for the brain’s hallucinations to run wild.

“What looks cool to you in a normal state of mind may be overwhelming (on ketamine),” he says. “For instance, an airplane or helicopter flying through a valley might be cool for some people but terrifying for others.”

Similar to ketamine-assisted psychotherapy, where patients undergo ketamine infusions during a psychotherapy session, Bonnett says that the virtual reality component of VDR is designed to immerse patients in a therapeutic environment where they can be guided by clinicians. It’s meant to enhance “the experience of ketamine with the hopes of leading to a lasting perspective change.”

Bonnett says that under the experience of ketamine, patients are more likely to be successful in changing their negative patterns of thought. For example, he often has his patients replace thoughts like “I’m a failure” with more positive thoughts like “I am enough” while under the drug’s effects.

But the VDR approach is largely still in beta testing, says Bonnett. Virtual reality’s main role in ketamine therapy today is simply to reduce anxiety during the psychedelic trip, while the drug works on raising their brain’s glutamate production.

The tranquil VR environment’s main purpose is to calm anxious patients. For some patients, the anxiety created by the thought of the drug-induced trip alone is enough to jeopardize the whole treatment.

Dr. Omer Liran, Assistant Professor at David Geffen School of Medicine at UCLA, began his foray into virtual reality and ketamine after being contacted by a clinic about patients who were too anxious or frightened by the psychedelic experience to complete their hour-long treatments.

Under the influence of ketamine, Liran says that too little stimulation, like a sterile hospital room, can act as a blank slate for the brain’s hallucinations to run wild, into potentially frightening places.

To combat that and improve the patients’ experience, Liran began to test different VR scenarios for clinic patients.

“On ketamine, people report feeling as if they’re floating outside of their body,” says Liran. “So you want to give them space (in VR) so they don’t feel like they’re hitting anything.”

Scenes including floating on brightly colored lakes or through space seem to work especially well, he says. While the trial was largely just a proof-of-concept, Liran says that he continues to receive phone calls from patients at the clinic asking to only continue their ketamine infusions if they can use the VR headset.

On ketamine, people report feeling as if they’re floating outside of their body… So you want to give them space (in VR) so they don’t feel like they’re hitting anything.

“I’ve gotten feedback from several patients that after the virtual reality experience was the first time that they actually felt not depressed in a long time,” he says.

Dr. Tim Canty of the Comprehensive Spine and Pain Center of New York says he can relate to these anecdotal reports. Like Liran, over the past year Canty has run a pilot study — which has not yet been published — on 18 patients to see how adding VR to their ketamine trip might positively enhance the experience. The patients were given three different rounds of ketamine infusions — one with VR, one without, and a final infusion where they could choose their preference.

In future trials, Dr. Canty says they plan to use EEGs during the ketamine VR treatments to better understand brain activity during the treatment and how this approach compares to other novel therapies, like mindfulness meditation or other psychedelic therapies.

While the therapeutic possibilities of ketamine and VR sound promising, these treatments still have many obstacles to overcome before becoming more widely available to patients. In addition to facing academic and public scrutiny as ketamine itself is further investigated as a therapeutic drug, Liran and Bonnett both say that securing funding to pursue their even more niche research questions is a major obstacle.

Going forward, all three researchers plan to continue exploring and refining their treatments in order to learn more about how they can help patients.

“I think this is going to be something we see more of in the future,” says Dr. Canty. “The combination of medicine and technology. We think there can be a lot of power bringing those two things together.”

Neuroscience
Neuroscientists identify a brain pathway for overcoming fear
Up Next 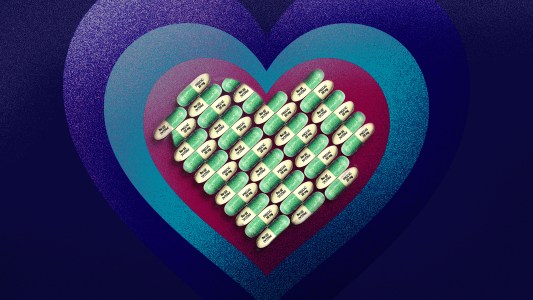 Drugs don’t just affect the user; they shape relationships too. And a pair of bioethicists thinks we should consider them for relationship enhancement.

Love
The case for love-enhancing drugs
Subscribe to Freethink for more great stories
Subscription Center
Sections
Video
Freethink
Subscribe
We focus on solutions: the smartest people, the biggest ideas, and the most ground breaking technology shaping our future.
Subscribe