It’s well documented that drugs can have a negative effect on how we relate to others — but can they ever be used to help us achieve healthier relationships?

In their book Love Drugs, University of Oxford bioethicists Brian D. Earp and Julian Savulescu argue that they may be able to — but that we don’t know for sure because almost all medical research focuses on a drug’s effect on an individual. The two bioethicists argue that needs to change.

“I think that people don’t want to medicalize love. They don’t want to think of love as a sort of thing that’s susceptible to being broken down into scientific categories and interpreted through disease labels,” says Earp. But if research points us to a relationship-enhancing drug, the juice could be worth the squeeze.

“Relationship-enhancing” drugs may take many different forms. It could look like MDMA-assisted couple’s therapy, where the partners can use the effects of the drug to safely and effectively work through difficult topics. Or, in a couple where one person’s sex drive is lapping the other’s — a serious problem for some partners — the libido-dampening effects of antidepressants may help their sex lives align.

Freethink caught up with Earp to talk about the potential challenges and benefits of mixing drugs and love.

This interview has been edited for length and clarity.

Freethink: ‘Love drugs’ don’t create love. But this idea of love potions and anti-love potions are very old and cuts across lots of cultures. Why do you think we have this social archetype?

Brian D. Earp: I think love is very powerful. Especially the sort of romantic love that gets celebrated in plays like Romeo and Juliet. It’s often been seen as a threat to the social order because love often does feel like this thing that’s out of one’s control. And so if you come from the wrong family or the wrong side of the train tracks or whatever it is —and if the society is more concerned that marriage has to be based around political alliances — then love is dangerous. The sort of thing that you might want to try to control.

Freethink: What inspired you to take this stance that relationships are just as important to study when we talk about these chemical interventions?

Brian D. Earp: I started to notice that there are medications that we use for other purposes for which there’s some evidence that they’re having interpersonal effects. But we have been pretty neglectful about systematically studying those interpersonal effects. And so, through trying to come up with a concrete suggestion for how, in fact, the biological dimension of love could be manipulated through biotechnology, I had to dig into existing medications and was just surprised at how individually focused all of that was.

Freethink: Why do you think that we’ve been failing to study the impact of drugs on interpersonal relationships on a larger scale?

So within psychology, generally there’s a recognition that dyadic studies are hard to do because the variables you need to keep track of suddenly multiply: now you’re going to have to have a person (multiplied) by a drug (multiplied) by a relational interaction. This is much more complicated because if you change partners and you have a different dynamic between them then you had with your last partner, all of a sudden the same drug might have very different implications for the relationship.

Freethink: Do you think the fact that we haven’t necessarily been looking as deeply at drug intervention when it comes to love and relationships is a public health issue?

Brian D. Earp: I think some people are afraid of the way in which medicine has intervened in people’s lives in ways that feel oppressive or paternalistic.

The history of treatment of people who have minority sexual orientations is a good example of this, where according to mainstream culture, this was seen as “aberrant” and therefore as pathological. Now with hindsight, we think we had too narrow a vision of what could count as a good relationship. And so there’s a risk that that could happen.

We’re right to give people a pretty wide berth in making judgments about whether a relationship is consistent with their own values and whether it falls within the range of different kinds of good relationships. But it’s true that there are certain modes of interacting that in any view are toxic and harmful and damaging.

I don’t know exactly where that line is, but as a society, we do have to have a better conversation about what is the range of healthy, fulfilling, and flourishing relationships. How can we identify cases that go beyond that – without giving into the temptation to start to pathologize forms of connection that aren’t normal from our perspective?

Freethink: As people become more accepting of “drugs” for intractable mental health situations – like MDMA for PTSD or ketamine for depression – do you think that we might come to a place where we understand that a relationship can be treated or enhanced in a chemical way? Will ‘love drugs’ become as accepted as couples’ counseling?

Brian D. Earp: I think there’s evidence that we’re moving in that direction.

The scientists that were behind the original MDMA for PTSD trials are some of the leaders in that area. They had started a pilot study where one of the partners has PTSD, but the romantic partner is also invited to the therapy session. And then both of them undergo MDMA assisted therapy. They can actually work through what are the implications of PTSD for the relationship. And this has to do with the recognition that’s growing in literature: that PTSD has effects on families, it has effects on communities, and it has effects in relationships. It’s not just about the individual and their symptoms.

I guess the takeaway is that there are drugs that we are already prescribing that are undoubtedly having interpersonal effects.

We should study the interpersonal effects of the drugs we’re already using to make sure we’re not seriously harming our relationship or to identify the cases where we are.

And with these new and powerful drugs that are coming into medicine, maybe we can actually harness some of these interpersonal effects and use them not just for treating diseases, but for general relationship improvement.

Drugs
Should psychedelics be patented?
The issue of patents has riven the psychedelic field. A lawyer’s repository of psychedelic info may make sure the new field stays fair.
Up Next 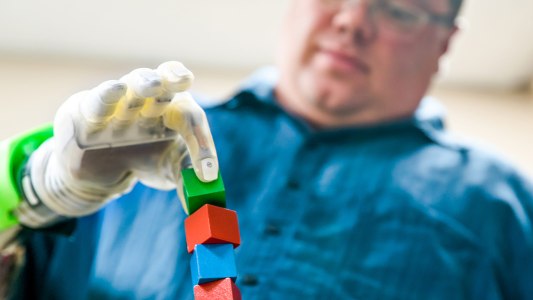 This new technique allows a person to control their prosthetic hand precisely and in real-time by amplifying the nerve signals from their residual limb.