Wind is a big industry. In the U.S., wind is responsible for producing more than 9% of all electricity, and it’s doing so at rates more than 20% cheaper compared to 2010. The natural energy source is big business in physical terms, too: On sprawling wind farms across the nation, turbines tower more than 280 feet into the sky where they exploit the stronger winds found at higher altitudes.

But not all wind energy is harvested on grand scales. A tiny slice of the electricity generated from wind comes from small wind turbines, which are often 10 times shorter than commercial turbines and can be added to microgrids that help power homes and small businesses.

To Cat Adalay and Rachel Carr, the “small wind” market was missing a big piece of the puzzle: consumer access to the technology. That’s why they founded Aurea Technologies, a Halifax-based startup that designed a lightweight, self-contained turbine system that can fit inside a backpack.

“We’re all about getting portable wind energy into as many hands as possible.”

Called Shine, the turbine is about the size and shape of a large water bottle. The turbine includes a mount, tensioned cables, and pegs to secure it into the terrain, blades, and a 12,000 mAh internal lithium-ion battery. After two minutes of setting up, Shine can generate about three phone charge’s worth of electricity in an hour at max wind speeds of 28 mph.

Aurea envisions Shine as a tool that hikers can use to ensure that their phones, GPS systems, and other electronic devices stay charged. The turbine could also help out in emergency situations.

Aurea is currently building Shine units to fulfill orders submitted through its Kickstarter campaign, through which preorders of the device quickly sold out last year. The startup aims to eventually make a big profit in the small wind market.

Wind turbines are especially efficient producers of electricity. The machines not only operate without any emissions-creating inputs, but they are also able to exploit the cubic relationship that wind has with energy output; for example, if you doubled the speed of the wind, the turbine would produce eight times as much power.

With a background in mechanical engineering, Adalay aimed to find better ways to harness the power of wind when she founded Aurea in 2017. Her original idea was to design small wind turbines that could be installed in high-rise buildings, with the goal of arranging the turbines such that each would funnel air into the next, boosting the overall output of the system. But this approach turned out to be prohibitively expensive for the young company.

Adalay and Carr eventually landed on Shine. The portability aspect of the small turbine is unique, but it works in the same general process as other wind turbines: the wind spins propeller-like blades around a rotor which is connected to a shaft that spins a generator and produces electricity.

Shine still required some thoughtful engineering. The main challenge was building a small turbine that was light enough for someone to comfortably carry in a backpack but strong enough to endure the elements. To hit that sweet spot, Adalay started designing 3D-printed turbine prototypes.

Although those first attempts weren’t necessarily successful on an aesthetic level — Adalay likened them to an “ugly baby” — they did succeed in communicating the basic idea of the concept to investors.

“Prototyping is a wild journey, especially in the early days when you don’t have a lot of money,” Carr said. “It can’t be perfect, it’s all going to change. So, just get something out there, get feedback, and then go back to the drawing board.”

That’s what Aurea did. After multiple iterations inspired by feedback from investors and potential users, the startup ended up with a small turbine that outperforms all others in terms of power output compared to weight. The next step was bringing it to market.

Building funds and community through crowdfunding

Aurea needed capital in order to begin manufacturing Shine. So, Carr and Adalay decided to launch a Kickstarter campaign. The goal was not only to raise funds, but also to start building a community of fans who were understanding of the fact that Aurea was a new company launching a new product.

“Crowdfunding is not shopping,” Adalay told Freethink. “Having those backers understand that you’re figuring out those ups and downs — that’s everything.”

In June, Aurea launched its first Kickstarter campaign in June 2021. It took just an hour for the company to hit its fundraising goal of $15,000. By June 2022, Aurea had raised more than $560,000 across its campaigns on Kickstarter and Indiegogo.

In addition to providing the necessary funds to begin manufacturing their product, the successful Kickstarter campaign served as empirical proof for Adalay and Carr that there was room for Shine in the small wind market.

Aurea is approaching its goal of putting wind-turbine technology into the hands of everyday consumers. Although the company has yet to turn a significant profit, securing those initial fundraising rounds enabled Carr and Adalay to keep producing Shine while building an online community of fans eager to see the product come to life.

The hardest part of the journey, according to Carr and Adalay, was pursuing the vision behind Shine even in the face of rejection, doubt, and logistical setbacks. As for entrepreneurs who might be in a similar position? 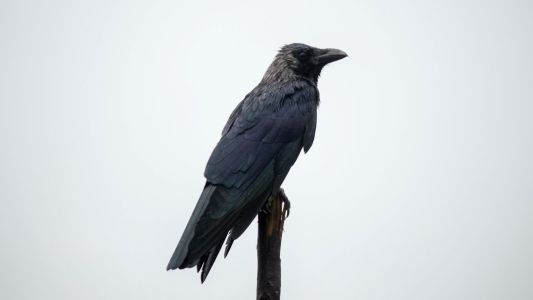 Crows and the rest of the corvid family keep turning out to be smarter and smarter. A corvid’s pallium has more neurons than a great ape’s.

Animals
Crows are self-aware just like us, says new study
Subscribe to Freethink for more great stories
Subscription Center
Sections
Video
Freethink
Subscribe
We focus on solutions: the smartest people, the biggest ideas, and the most ground breaking technology shaping our future.
Subscribe