A new study shows that blood transfusions from fit mice can slow or reverse signs of cognitive decline in sedentary mice. The key ingredient is a single protein that the liver produces in response to exercise.

If this sounds familiar, it may be because of the fad of “young blood therapy,” which alleges that blood from young people can reverse aging. (The FDA says there is no proof of this, and the theory is widely considered pseudoscience.)

But, while they both claim benefits from transfusions on the age-related decline, this new research (published in the journal Science on July 10) says that it isn’t the age of the donor that matters, it is their fitness level.

The first sign of cognitive decline in aging humans (and mice) is the loss of spatial memory — the ability to remember object locations, like where you placed your phone, or where the car is parked.

Even though we can’t reverse time, there are things you can do about the decline. Exercise is one of them. But vigorous exercise isn’t an option for many elderly people, who lose bone density, muscle mass, and balance as they age.

Researchers at UC San Francisco, led by neuroscientist Saul Villeda, transfused blood plasma between two populations of aged mice:  a sedentary group and an active group. The active mice enjoyed unlimited access to an exercise wheel, while the sedentary group did not have a wheel.

The researchers suspected that the liver might be involved because the organ is known to play a key role in regulating blood composition in response to exercise.

After exercising, the active mice had higher levels of one key ingredient: a protein called GPLD1 which the liver secretes into the blood after exercise.

To ensure that the boost in brain performance was, in fact, due to the GPLD1 protein, the researchers then genetically modified a group of mice so their livers would produce more of the protein, even without exercise. Even though those sedentary mice were denied the exercise wheel, they were able to find the hidden platform as fast as the mice that exercised.

Researchers don’t yet understand exactly how the GPLD1 protein might improve brain function because the protein can’t directly access the brain — it doesn’t pass through the blood-brain barrier. So it must influence some other process or enzyme that does affect the brain, although their study did not identify it.

But don’t jump on the anti-aging transfusion bandwagon yet. Studies in mice don’t always transfer to humans, and although there is some relationship between the liver protein and the brain, much more research is needed to understand that link.

This work is one small step in the pursuit of treatments to slow or stop aging. But Villeda warns that there is no indication that future therapies arising from this work are going to somehow replace the need for exercise, which has many additional benefits, like weight loss or fitness. 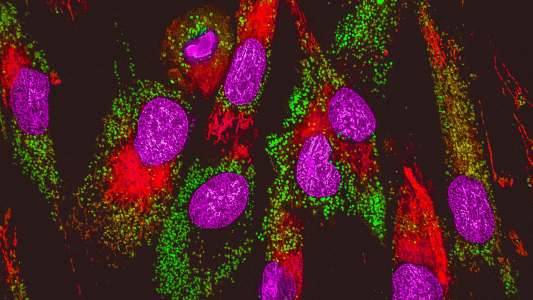 Researchers can now edit a part of the human genome that CRISPR has never been able to. This opens up new possibilities for research and cures for devastating rare genetic diseases.