A decades-old anti-psychotic drug has helped to identify a new pathway for treating chronic pain — as well as an unusual connection to lung cancer.

Fluphenazine, once used to treat schizophrenia, was one of 1,000 FDA-approved drugs that researchers evaluated, hoping to find one that can reduce a chemical released by neurons (called BH4) that’s linked to chronic pain.

A decades-old anti-psychotic drug has helped to identify a new pathway for treating chronic pain — as well as an unusual connection to lung cancer.

The study, conducted in mice and published in Science Translational Medicine, could help reveal new ways of assuaging the suffering of the millions of people who suffer from chronic pain.

“Furthermore, effective painkillers such as opioids can lead, if used inappropriately, to severe addiction. It is therefore critical to find and develop new and repurposed drugs to treat chronic pain.”

Teams around the world are racing to do just that, investigating gene therapies, psychedelics, and electrical implants, as well as reexamining decades-old dogma on pain treatment and turning to the vast array of natural toxins for new therapies.

“The concentrations of BH4 correlated very well with the pain intensity,” Cronin, a former postdoc of Woolf’s, said. “So, we naturally thought that this was a great pathway to target.”

The researchers screened already approved drugs to identify any with previously unknown painkilling properties related to BH4. In doing so, they were able to link previously known, but not well understood, analgesic effects of other compounds, like capsaicin — the compound that makes chilis spicy — to the BH4 pathway.

And they discovered at least one old drug they could potentially repurpose.

They tested fluphenazine’s ability to lower BH4 in mice, where it was determined that a painkilling dose was comparable to the low end of the dosing range used to treat schizophrenia.

Interestingly, the team also found a direct connection between cancer and chronic pain. EGFR/KRAS signaling, a pathway involved in aggressive lung cancer, seems to share a pathway with BH4. When an enzyme in the BH4 pathway was eliminated, mice who were engineered to model the notoriously deadly KRAS-derived lung cancer developed fewer tumors and lived longer.

Figuring out this interplay could lead not only to cancer therapies, but better management of the chronic pain of cancer patients.

Planet Earth
Are we living in a baby universe that looks like a black hole to outside observers?
If the black holes that form in our cosmos give birth to baby Universes, perhaps we arose from the formation of a black hole ourselves. 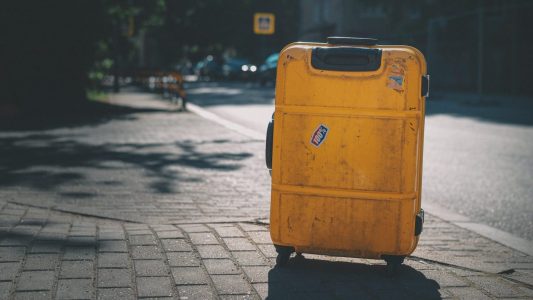 The investigation of human remains in a suitcase can often represent a Pandora’s box, full of complicated problems.

Biology
When remains are found in a suitcase, forensics can learn a lot from the insects trapped within
Subscribe to Freethink for more great stories
Subscription Center
Sections
Video
Freethink
Subscribe
We focus on solutions: the smartest people, the biggest ideas, and the most ground breaking technology shaping our future.
Subscribe