It’s easy now — with the coronavirus pandemic shredding society and our financial/mental/health security — to see bats as the enemy.

Across their incredibly numerous species, bats carry a number of nasty viruses: rabies; the dread viral hemorrhagic fevers Ebola and Marburg; the Hendra and Nipah viruses; and, of course, sundry coronaviruses.

All of these bat viruses are potential zoonoses, meaning they can jump from the bats to humans, either directly or through another animal.

While killing a virus-riddled bat population seems like the obvious way to protect people from spillover diseases, bats overall are an incredibly beneficial species — and culling isn’t effective anyway. Bats devour insects (some of which carry diseases, too), pollinate plants, and help seed devastated forests on the fly.

But we need to live with them … carefully.

Around the world, researchers are developing methods to keep us living in harmony with bats, while preventing zoonoses. From simply learning how to live together to potentially genetically modifying entire species, bat control methods — from playing house to playing God — may be the key to preventing the next pandemic.

When a new strain of Ebola, called Bombali ebolavirus, was discovered by a research team in Sierra Leone, it wasn’t found in bats hidden deep in the bush — it was in bats living in and around people’s homes.

Living shoulder-to-wing with bats like this means that everyday decisions and cultural habits are crucial to preventing spillovers. In Sierra Leone, that means distributing Living Safely With Bats. A pictorial book, able to be translated into multiple languages, it lays out guidelines for … well, living safely with bats, explaining behavior changes and getting across the risks.

“We wanted something general that our teams could adapt and use as needed,” says David Wolking, global operations officer for PREDICT, a pandemic-prevention project sponsored by UC Davis and USAID. The project both discovered Bombali ebolavirus and publishes LSWB.

PREDICT teams, including local researchers, worked with community leaders to disseminate best practices for bats. In classrooms, community meetings, and across the radio, people learned simple methods to prevent virus transmission. Covering food, using protection if you ever have to touch a bat, and keeping them away from homes, gardens, and domestic animals all can help.

In Eastern Australia, a lack of food in the winter is pushing bats carrying the deadly hendra virus into closer contact with horses, which in turn can infect people, says Penn State biologist Peter Hudson. Hudson’s colleague Peggy Eby is pushing to restore the bat’s food sources, working with landowners and local governments to encourage re-planting.

Restoring or rewilding habitats can keep the bats healthy and stop excess contact with people. BCI has a large-scale rewilding project in Mexico and the southwestern United States.

Some food sources decline with human development, but others are created by people.

Across Latin America, vampire bats dine out on mammals raised by farmers. Vampire bats feed by making an incision into an animal and lapping up blood — an excellent way to transmit rabies. One of the deadliest infections in the world, rabies without vaccination is all but guaranteed to end in death.

The natural human response — like with mosquitoes — is to kill off or significantly reduce the disease carrying population.

But culling vampire bat populations has not succeeded in stopping rabies, says Kevin Bakker, a statistics research fellow at the University of Michigan. He’s part of a research team exploring another option: vaccination.

Grabbing and injecting thousands of vampire bats with a rabies vaccine would be a virtually impossible project, not to mention absurdly dangerous. But some scientists are working on a way that bats could potentially vaccinate each other.

Spreadable and transmissible vaccines are vaccines that can spread through a population on their own accord. A spreadable vaccine can be spread from the vaccinated animal to others — say, from licking it off each other’s fur — but then it stops.

A transmissible vaccine, a more radical approach, spreads throughout a population in the same way a virus does.

To test if a spreadable vaccine would be feasible for rabies control, researchers captured vampire bats in Peru and tagged them with a glowing biomarker between their shoulder blades. As the highly social vampire bats groomed each other, the researchers looked for the glow in other bats and then modeled how well it spread. The models suggest that a spreadable vaccine would vaccinate 2.6 bats for every one originally vaccinated.

Bakker says spreadable vaccines could technically be used now. But we don’t yet know how well they’d work.

Michael Jarvis, associate professor of virology and immunology at the University of Plymouth, is part of a team developing a transmissible vaccine for soft furred mice. These West African rodents are a primary vector of Lassa fever, a nasty illness similar to Ebola.

Jarvis works with cytomegalovirus (CMV), a type of herpesvirus. By inserting the genetic code for a different virus’s antigen, he can transform CMV into a viral vaccine vector. The idea is to introduce a modified CMV virus in mice that will protect them against Lassa virus, without causing the disease, and then spread throughout the mouse population. Ultimately, if enough mice get the benign virus, it will stop the mice from spreading Lassa fever to humans.

This method relies on the virus, not the animal, to vaccinate the population. A transmissible bat vaccine would work similarly.

Transmissible vaccines face some hurdles before they hit the wild — both they and spreadable vaccines are likely a few years from controlled testing, and many more from being deployed. Among the challenges is the risk of the vaccine spreading beyond the intended population or jumping into a different animal, with potentially unpredictable results.

There are a variety of methods to prevent this from happening. Scientists can insert genetic directions that fade over time, making the vaccine self-limiting. Choosing the right base virus is also important.

Herpesviruses like CMV make for ideal vectors because they’re infectious, do not cause debilitating disease, and tend to be highly species-specific, making them unlikely to jump to another animal.

Using spreadable vaccines, rather than transmissible vaccines, could help prevent accidental spread, as well. “The key thing there is that you’re only really getting your vaccine spreading from the animal that you treat,” says Daniel Streicker, a senior research fellow at the University of Glasgow, who works with Bakker.

A more likely challenge than a transmissible vaccine spreading too well is it not spreading well enough.

Using viruses that commonly infect a specific species make for good vectors, but they also run into the problem of animals who have been exposed to it before and now have antibodies and possible immunity. Once again, herpesviruses like CMV offer a solution: they are notoriously good at re-infection.

Virus vaccines are one way of spreading the immune response you want; another is reproduction. Using a technique called a gene drive, humans can potentially create a bat population of our own design.

Normally, with sexual reproduction, an animal randomly passes on half of its genes to any given child (and they get the other half from their other parent). A gene drive is a way of cheating the odds, so that a particular gene (say, for infertility or for immunity to a virus) has a better than 50/50 chance of being passed on.

“Natural gene drive systems are everywhere; tools like CRISPR mean we can now make them in the lab — and potentially engineer wild populations or even whole species,” Kevin Esvelt, director of the Sculpting Evolution group at MIT, tells Freethink via email.

The possibilities are dizzying. Theoretically, we could create a gene drive that causes animals to pass on genes that reduce the size of their population or help prevent zoonoses, says Renee Wegrzyn, program manager of DARPA’s Safe Genes program.

“They were almost too powerful to use,” she says. “This is a real dilemma.”

Researchers are developing possible answers to that God-playing dilemma.

Molecular containment gene drives could require a certain molecule to be present for the gene to be activated — meaning that humans would have to continuously supply some food or medicine to the animals to turn on the gene. (You may remember this plot element from Michael Crichton’s Jurassic Park books.) Another safeguard could be a “generation counter,” which in theory would cause the gene drive to degrade each time it is reproduced.

“When we built the first CRISPR-based drive system to edit a gene in a lab organism, we simultaneously built another one that undid the change by overwriting the first,” Esvelt says. “Both of them worked on the first try. That’s incredibly important, because it means they’re slow, obvious to genome sequencing, and can be easily countered.”

Unlike learning to live together or restoring their habitat, transmissible vaccines and gene drives have the potential to completely alter bat populations. Difficult ethical questions must be asked about that.

“It’s about what we’re ok with,” says Natalie Kofler, founder and director of Editing Nature. “And what kind of future we want to create.”

A future where the risk of a zoonotic pandemic is eliminated is likely an impossible ask. But through research, best practices, and the wider-scale vaccination or alteration of bats and their habitats, we may be able to live side by side safely, for a little while longer.

Editor’s note: This article was updated 5/26 for a misspelling; it is Natalie Kofler, not Kolfer. 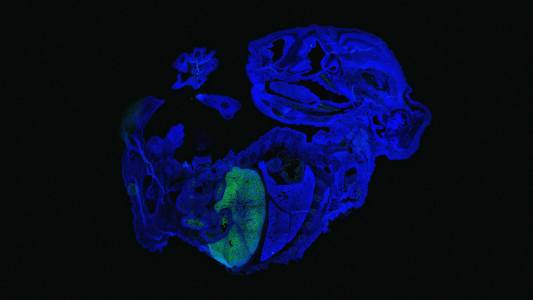 New stem cell research has revealed a way to coax human cells to grow to maturity in mouse models, a major advance in the field.