Since one of COVID-19’s main beachheads is in our noses, research is currently underway to develop nasal vaccines that can spark immunity in the nose, fighting off the virus at the very beginning of its invasion.

Producing a strong immune response with nasal vaccines isn’t easy, however — your mucus is pretty tough to get through to begin with, meaning vaccines face the same fight as pathogens do.

But now, researchers at the University of Tokyo believe they have a clue as to how to do it better: pay attention to the bacteria already living in there.

“Our study shows that both integrity and amounts of nasal bacteria may be critical for effective intranasal vaccine,” principal investigator Takeshi Ichinohe said.

Why nasal vaccines may matter: “When you think about it, that’s where we acquire most of our infections: we inhale them, we consume them, or we get them through sex,” immunologist Michael W. Russell told Chemical & Engineering News. (Uh, we’re only going to focus on the first one for this piece.)

Getting an immune response in the nose is called “mucosal immunity,” and yes, that’s because we’re talking about mucus. While admittedly gross, mucus serves an important purpose.

“Mucus is essential for the protection of your body,” Boston University ear, nose, and throat surgeon Jeffrey Spiegel told Vox. “It’s a protective barrier and it allows you to breathe comfortably. If you had no mucus, you’d be quite sorry you didn’t.”

Getting an immune response in the nose is called mucosal immunity, and yes, that’s because we’re talking about mucus. Which is gross, but important — it’s a protective barrier, the immune system’s front line.

Nasal vaccines can spark both local, mucosal immunity and body-wide immunity, like a typical jab under the skin does. They can also be given to people much easier than a shot, since they require no special training or needles to deliver.

Because of the ease of huffing a nasal vaccine — and the lack of potentially scary needles — they could become an effective frontline weapon against endemic viruses, like flu, and when a new infection breaks out.

But because nothing in the body happens in a vacuum, the researchers looked to see if the bacteria already in our noses may have an impact on nasal vaccines.

Thanks, bacteria! The University of Tokyo team looked to find just what role the bacteria living in your nose may play in mucosal immunity.

In their study, published in mBio, the researchers turned to mice to test nasal vaccines against the flu and SARS-CoV-2.

They found that when they used antibiotics to wipe out the bacteria already living in the mice’s noses, their nasal vaccine worked better.

When the bacteria are killed, they release tiny fragments of themselves. These draw the attention of the body’s innate immune system — the frontline infantry and sentries of the body. They aren’t trained to hunt down any one invader specifically, but they are constantly on the go, a roaming security squad.

Because the bacteria fragments stimulate an immune response, they help boost the immune response generated by the nasal vaccine; in essence, they become natural adjuvants, the ingredients added to some vaccines to make them stronger. (They can also make your side effects worse, but we’re working on that, too.)

The team also found that adding certain bacteria found in the mouth can boost the efficacy of nasal vaccines. When helpful bacteria grown from a human volunteer were mixed in, the nasal vaccines stopped SARS-CoV-2 and influenza from infecting the mice.

The team believes that their findings “provide clues for developing better intranasal vaccines,” they wrote. 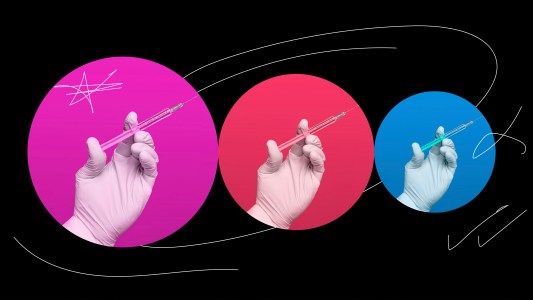 The FDA has expanded its authorization of COVID-19 boosters of Pfizer’s vaccine to include seniors and people in high-risk populations.