Using a technique for measuring biological age, scientists discovered that castrated male sheep not only live longer than their intact counterparts, but also have “younger” DNA — a discovery that could inform anti-aging research for people.

DNA damage: As we get older, the DNA in our bodies sustains damage, and the level of this damage at any point in time determines our biological age.

Some of what happens to our DNA is just natural wear and tear, and some of the damage is caused by what we eat, our lifestyles, and environmental factors. That means a healthy 70-year-old and a hard-living 50-year-old could both have a biological age of about 60.

On the clock: While you can figure out someone’s chronological age by simply counting the years since they were born, determining biological age isn’t so straightforward.

However, researchers have identified certain markers in DNA that they can use to create tests called “epigenetic clocks.”

Using these tests, they can look at a sample of an animal or human’s cells and determine whether their DNA is aging faster or slower than what would be expected for their chronological age. This information can then be used to estimate their biological age.

What’s new? Researchers at UCLA and the University of Otago have developed the first epigenetic clock for sheep and used it to compare the biological ages of intact males and castrated males.

“Both farmers and scientists have known for some time that castrated male sheep live on average much longer than their intact counterparts,” first author Victoria Sugrue said in a press release. “However, this is the first time anyone has looked at DNA to see if it also ages slower.”

The results: After analyzing DNA samples from more than 400 sheep, they determined that the biological aging of castrated males was in fact slower than that of intact males.

They also noticed that castration appeared to make specific sites in the DNA of males take on characteristics more often seen in females during the aging process.

“Interestingly, those sites most affected by castration also bind to receptors of male hormones in humans at a much greater rate than we would expect by chance,” team co-leader Tim Hore said.

“This provides a clear link between castration, male hormones, and sex-specific differences in DNA aging,” he continued.

Your biological age: We already knew that the females of many mammal species — including humans — tend to live longer than males. This study suggests that those specific DNA sites may be part of the reason why.

That knowledge might help human longevity researchers develop ways to delay biological aging, perhaps by creating treatments that affect the binding of male hormones to the identified sites.

In doing so, they may be able to narrow the longevity gap between men and women — no castration required.

Public Health
Google sister company aims to eradicate dengue from a tropical country
Verily, owned by Google parent company Alphabet, believes it can eliminate Singapore’s dengue problem.
By B. David Zarley
Up Next 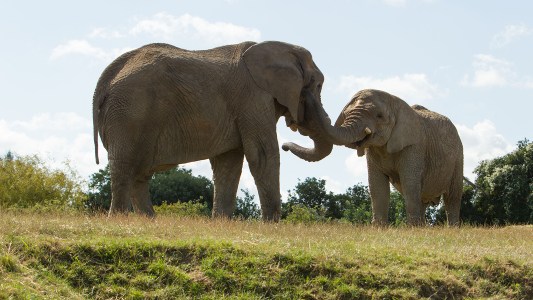 Animal conservationists plan to attempt the largest elephant rewilding ever, flying an entire herd from a U.K. zoo to Kenya to be released.

Animals
Should a herd of captive elephants be released into the wild?
By Kristin Houser
Subscribe to Freethink for more great stories
Subscription Center
Sections
Video
Freethink
Subscribe
We focus on solutions: the smartest people, the biggest ideas, and the most ground breaking technology shaping our future.
Subscribe