A bionic eye that could help visually impaired people see again is ready for clinical trials — and if it works as hoped, it might one day give us superhuman sight.

How seeing works (and doesn’t): Cells in our eyes called “photoreceptors” convert light into electrical signals and send those signals to the eye’s ganglion cells.

Those send the signals to the optic nerve, which transmits them to your brain for processing — that’s how you “see” your surroundings.

Diabetes, genetic diseases, and many other health issues can damage photoreceptors. This is called “retinal degeneration,” and it causes many people to progressively lose their vision.

Work around the problem: There’s currently no cure for retinal degeneration, but the Phoenix99 bionic eye system may be able to help people bypass the problem.

The experimental device, under development at the University of Sydney and University of New South Wales, consists of three main parts: a video camera mounted on a pair of glasses, a communicator placed just under the skin behind the ear, and a stimulator implanted near the ganglion cells in the eye.

Information from the camera is sent wirelessly to the communication module, which prompts the stimulator to deliver electrical impulses to the ganglion cells.

Those cells relay the signals to the optic nerve — just like they would if they’d received the signal from the photoreceptors. The pattern of the electrical impulses is what lets the brain see some of what the camera sees.

“The neighboring cells are sitting right there and waiting for impulses from the photoreceptors so they can send their message down the line,” researcher Samuel Eggenberger told SYFY WIRE. “We record with a camera, extract all the information that’s not useful for navigation, simplify the images, and turn that into stimulation patterns.”

What it means: As Eggenberger notes, the bionic eye won’t restore 100% of a person’s sight. However, even a little bit of vision could make everyday life a little easier for people with severe retinal degeneration.

“I like to do this mental exercise where I close my eyes and try to picture where I am in the room,” he said. “Then I realize if the device is able to give me even just vertical lines where doors are, or bright spots where windows are, it would already be immensely useful.”

“We’re going from a total absence of vision to something that’s functional,” he continued.

“We can ask the patient if it’s better, is the image crisper, how does it change?”

Looking ahead: The bionic eye was well-tolerated by sheep during a three-month trial, but the researchers still don’t know how much lost vision the Phoenix99 can restore — for that, they need human trials, which they are now applying for permission to conduct.

They’re hopeful their device might work better than others like it, such as the FDA-approved  Argus II system, because it can be customized to each individual without the need for additional surgeries.

“We can change the parameters of the device by typing on a computer and tell the electrical charges to be returned to different places,” Eggenberger said. “Then we can ask the patient if it’s better, is the image crisper, how does it change?”

The big picture: Restoring partial vision in people with retinal degeneration is just the first possible use for the bionic eye — one day, this technology could let people with perfectly healthy eyes achieve superhuman sight.

This wouldn’t require giving up your biological eyes, since it doesn’t replace the eye or photoreceptors. The system could simply augment human vision by providing additional signals.

“All the implant does is stimulate in certain areas as it is instructed to, there’s nothing that would stop us from integrating different types of cameras to capture something like infrared,” Eggenberger said.

“There’s nothing to stop us from giving night vision,” he continued. “You don’t have to rely on actual incident light, you can look at it from different wavelengths.”

It isn’t the only tech with the potential to enhance existing human abilities, either — thanks to exoskeletons, neural implants, and other bionics, the humans of tomorrow could be smarter, stronger, faster, and all-around more capable than those of today.

Ready or not, the cyborg future is coming.

Medicine
Engineered bacteria may one day prevent kidney stones
In a small proof-of-concept study, an engineered E. coli was able to reduce levels of a kidney stone-causing chemical.
By B. David Zarley

Food
Harvard and Kraft Heinz are trying to make sugar healthier
Instead of replacing sugar, Wyss scientists had an idea: what if they change sugar to make it healthier?
By B. David Zarley

Wearables
New VR body suit lets you see inside your body while you exercise
A system for monitoring motion and muscle engagement could aid the elderly and athletes during physical rehabilitation.
By Rachel Gordon | MIT CSAIL
Up Next 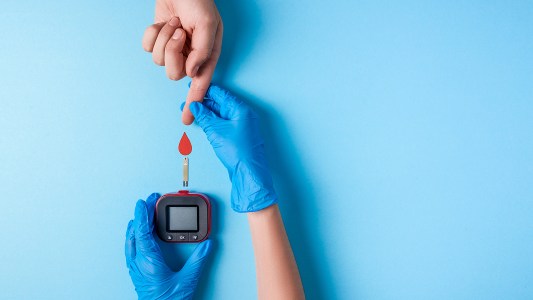 An experimental stem cell treatment has eliminated type 1 diabetes in a patient, giving experts guarded hope for a diabetes cure.

Medicine
First person cured of type 1 diabetes thanks to stem cells
By B. David Zarley
Subscribe to Freethink for more great stories
Subscription Center
Sections
Video
Freethink
Subscribe
We focus on solutions: the smartest people, the biggest ideas, and the most ground breaking technology shaping our future.
Subscribe