Researchers have turned an FDA-approved cancer drug, which is effective but has brutal side effects, into a smart weapon. The tweaked drug is better able to home in on cancerous cells, while avoiding collateral damage to healthy cells.

Cancer has an insatiable appetite for iron, so by putting a chemical sensor on the existing drugs, they were essentially able to create iron-seeking therapies that only activate in iron-rich cancer cells. In mouse models, the drugs stopped tumor growth while leaving other tissues, like the skin, alone.

Even better, the enhanced drugs were effective against cancer cells with a specific genetic flaw, called an RAS mutation, which is one of the most treatment-resistant forms of cancer and accounts for roughly a quarter of cancer deaths.

“RAS mutations, by themselves, cause more misery than all other cancers combined, and take so many lives worldwide,” study senior author Eric Collison, a doctor at the UCSF Helen Diller Family Comprehensive Cancer Center, says.

“This study brings us much closer to addressing the unmet need for better treatment of these cancers.”

“Death Star” cancers: Your genetic code ultimately controls everything your cells do — including growing and dividing. When a cell turns malignant, they go haywire, leading to unchecked growth and tumors. In a healthy cell, this is prevented by the RAS gene, meaning an RAS mutation can potentially cause cancer.

Current cancer drugs are effective at stopping this growth, researchers say, but there’s a catch — a big nasty one. Many of these drugs also stop growth in healthy cells, leading to horrible side effects that patients can find unbearable, including pain, bleeding gums, difficulty breathing, and severe sunburns.

By adding a molecular sensor, the drug can be made to turn on only when it encounters a cancerous cell.

“Cobimetinib is a classic example of an anticancer drug that we know works well on its target, but it hasn’t achieved its clinical potential because the same target is important in the skin and other normal tissues,” UCSF pharmaceutical chemist and study co-senior author Adam Renslo says.

One RAS mutation is especially hard to treat. The KRAS protein — dubbed cancer’s “Death Star” because of its lethality and smooth, round shape — has proven practically impossible to hit. The KRAS form of RAS mutation is most common in cancers of the pancreas and lungs, GEN reports, as well as colorectal cancer and some types of leukemia — all especially deadly forms of cancers.

These new iron-seeking drugs, published in the Journal of Experimental Medicine, may provide us another shot at a Death Star trench run.

Iron addiction: Because of its terrible side effects on healthy cells, the dosage of cobimetinib that patients can tolerate is often below the FDA-approved dose for efficacy, GEN reports.

We need a more targeted way to attack cells with an RAS mutation.

The researchers found that many KRAS cells have elevated levels of ferrous iron in them. By attaching a chemical sensor that detects iron to the anticancer drug, they ensured that the drug stayed inactive until it ran into iron, sparing healthy cells with relatively little iron.

This iron-seeking form of the drug was just as effective at stopping KRAS cancers in mice as the old carpet-bombing version.

“This is a really great, well thought out approach for targeting cancer cells specifically and it’s actually really promising,” Northwestern cardiologist Hossein Ardehali told the Daily Beast. Ardehali, whose lab is studying the cancer-iron connection, was not involved with the study.

Better weapons: UCSF’s Collison works everyday with RAS mutation cancer patients, seeing their struggles and pain, and he is hopeful that the new, smarter drug may soon be able to help those patients beat cancer, without being too beaten up themselves.

“By removing toxicity from the equation, you’re talking not just about one new drug, but 10 new combinations that you can now think about exploring in the clinic,”

Because of its lower toxicity, the iron-targeting version of the drug could potentially be used by itself in lower doses with other, more tolerable drugs, as well, opening the door to new anticancer cocktails.

“By removing toxicity from the equation, you’re talking not just about one new drug, but 10 new combinations that you can now think about exploring in the clinic,” Renslo says.

“That would be the home run for this approach.” 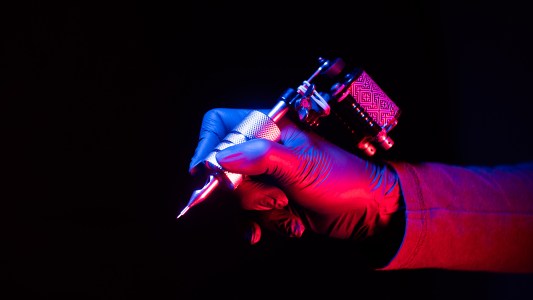 A tattoo machine may be a better delivery method for DNA vaccines than the standard syringe and hypodermic needle.

Medicine
How tattoo machines could revolutionize vaccination
Subscribe to Freethink for more great stories
Subscription Center
Challenges
Video
Freethink
Subscribe
We focus on solutions: the smartest people, the biggest ideas, and the most ground breaking technology shaping our future.
Subscribe