Instead of relying on the standard hypodermic needle and syringe to administer vaccines, we might want to start thinking about tattooing them into people, according to the makers of a video demonstrating how a tattoo machine delivers ink under the skin.

Tattoo vs. injection: To inject something with a hypodermic needle, we load it into a syringe, pierce the skin, and then press the plunger to push the liquid through the needle and into the body.

A tattoo machine doesn’t inject ink in this way, though.

Instead, it lowers and raises one or more needles incredibly fast — up to 50 times per second. But they don’t inject the ink. Instead, a tattoo artist dips the needles in ink, and when the needles pierce the skin, they create tiny holes. When they retract, the ink is pulled into the holes via suction.

Chemical engineer Idera Lawal from Texas Tech University presented his team’s video demonstrating this process during the March meeting of the American Physical Society, along with research analyzing the mechanism and the amount of liquid it delivers.

DNA vaccines: This in-depth knowledge about how a tattoo machine works isn’t just cool — it also has a practical application: it could make it easier for doctors to administer DNA vaccines.

These vaccines introduce a bit of genetic code that tells the body how to make a protein from a certain virus or bacteria. That protein prompts the immune system to create antibodies for the pathogen, which protect you if you’re ever infected.

This is how the mRNA vaccines for COVID-19 work, too, and like those shots, DNA vaccines can be made quickly and relatively cheaply. The difference is that mRNA vaccines use messenger RNA to deliver their genetic instructions and DNA shots use DNA.

DNA is more stable and robust than RNA, so DNA vaccines can be stored and transported at higher temperatures, which makes them easier to distribute. But DNA vaccines are also generally less potent than mRNA vaccines because their genetic code has to go deeper into a cell to work.

A better way: Researchers have been exploring different delivery methods for DNA vaccines in the hope of increasing their potency — they’ve added electrical stimulation to the process to open up cells, and used microneedle patches to deliver the shots to the skin instead of muscles.

They’ve also delivered the vaccines using a tattoo machine, and in both mouse and non-human primate studies, the approach has been more effective at promoting an immune response than standard intramuscular injection.

The bottom line: DNA vaccines are still incredibly new — only one has ever been approved for use in humans, and it’s delivered via a high-pressure stream of fluid.

Their potential is incredible, though, and Texas Tech’s research into the fluid dynamics of tattooing could help guide researchers looking to explore the unique delivery method for future shots. 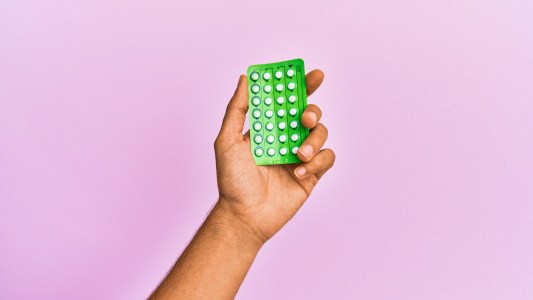 Clinical trials of a male birth control pill that was 99% effective at preventing pregnancy in mice are expected to launch in 2022.