Georgia Tech researchers have transformed a standard BBQ lighter into a delivery system that uses an electric spark to boost DNA vaccines — and it could help increase global access to a cheap, powerful new vaccine technology.

mRNA vs. DNA vaccines: DNA vaccines deliver a bit of genetic code that tells cells in the body to make a protein from a specific virus or bacteria. That triggers the immune system to create antibodies against that protein that will protect you if you’re ever infected by that particular pathogen.

This is exactly how mRNA vaccines work, too, and just like mRNA vaccines, DNA-based shots are relatively cheap to produce and easy to change to make new vaccines — but the way mRNA and DNA vaccines get their genetic instructions into cells is different.

DNA vaccines can be stored and transported at higher temperatures, which could be especially beneficial in less-developed and rural areas.

For mRNA vaccines, the code (written in messenger RNA) is wrapped in a bit of fat that protects the mRNA and helps it slip into cells. But mRNA degrades very quickly, so the vaccines have to be stored at ultra-low temperatures, which makes them more difficult to distribute.

The instructions in DNA vaccines don’t need to be wrapped in fat because they’re more stable — the double helix of DNA is very durable, unlike RNA’s single strand.That means DNA vaccines can be stored and transported at higher temperatures, which is easier for everyone but could be especially beneficial in less-developed and rural areas.

The challenge: DNA vaccines need to deliver their genetic code all the way into a cell’s nucleus (unlike an mRNA vaccine, which only needs to go into the cytoplasm). In the nucleus, the code is converted by the cell into mRNA, which then moves into the cytoplasm to make the proteins.

The difficulty of entering the nucleus makes the shots less potent than mRNA shots, and to date, only one DNA vaccine has performed well enough to be authorized for use in humans (a COVID-19 vaccine authorized in India).

Bolt from the BBQ: However, zapping cells with tiny pulses of electricity makes it easier for molecules to enter them. This technique, called “electroporation,” is commonly used in the lab, but it’s never been applied to vaccine delivery for practical reasons: the machines are large, complex, and expensive.

But researchers at Georgia Tech realized that there was already a small, simple, cheap device that they could potentially turn into a handheld electroporator: BBQ lighters, which create a spark of electricity every time you pull the trigger.

“Our aha moment was the fact that it doesn’t have a battery or plug into the wall, unlike conventional electroporation equipment,” researcher Saad Bhamla explained. “And these lighter components cost just pennies, while currently available electroporators cost thousands of dollars each.”

The testing: To turn a BBQ lighter into a booster for DNA vaccines, the Georgia Tech team integrated a small patch of microneedles. These needles serve double duty, delivering the pulses of electricity and the vaccine itself into the body.

To test out their vaccine delivery system, the ePatch, Georgia Tech partnered with Emory University researcher Chinglai Yang. He then used the device to deliver a DNA vaccine for COVID-19 in mice.

“Surprisingly, even in the first try, it went far beyond my expectations,” Yang said. “Using this method with the same amount of vaccine, the ePatch induced an almost tenfold improved immune response over intramuscular immunization or intradermal injection without electroporation.”

Looking ahead: The usual disclaimer about trials in mice applies to the ePatch: just because the device worked well on animals doesn’t mean its success will translate to humans.

The Georgia Tech team still has a lot of research to do in animals before human trials could start, too, and researcher Mark Prausnitz estimates that it’d take more than five years to have a device cleared for widespread use.

However, if the ePatch makes it that far, the device could potentially make DNA vaccines a viable option for places that currently have trouble distributing mRNA shots due to cold-chain requirements.

“We know that COVID-19 won’t be the last pandemic,” Bhamla said. “We need to think from a cost as well as design perspective about how to simplify and scale up our hardware so these modern interventions can be more equitably dispersed — to reach more underserved and more under-resourced areas of the world.” 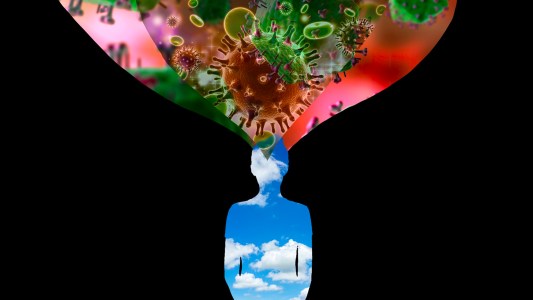 Two “elite controllers” that no longer have any replicable HIV virus in their bodies may hold the key to a cure for HIV.