Ragon Institute researchers have discovered two HIV-positive women whose own immune systems defeated the virus, achieving a “sterilizing” cure for HIV — and they hope studying these women will lead to a therapy for other patients.

The challenge: HIV attacks the cells of the immune system. If left untreated, it can weaken the system so much that the body can no longer fight infections — at that point, even common germs can become deadly.

Today, people with HIV can expect to live just as long as uninfected people if they take a daily combination of drugs known as antiretroviral therapy (ART). These drugs suppress the HIV virus and prevent it from replicating, allowing the immune system to carry on as usual.

One out of every 200 HIV patients is able to keep the virus suppressed without ART meds.

Elite controllers: That still isn’t a cure for HIV, though. The virus hides copies of its genome in the DNA of infected cells — those “viral reservoirs” can start making new copies of the virus if ART is ever interrupted.

But approximately one out of every 200 people with HIV is able to keep the virus suppressed without the need for ART meds.

They’re called “elite controllers,” and researchers have been studying them for decades in the hopes of finding a way to permanently suppress the virus, without the daily drug regimen, which can be costly and cause side effects (and may be hard to get for patients in low-income countries).

A sterilizing cure: In 2020, a team led by immunologist Xu Yu announced the discovery of an elite controller now known as the “San Francisco Patient.”

The woman, Loreen Willenberg, contracted HIV in 1992, but after analyzing 1.5 billion of her blood cells, Yu’s team couldn’t find any “intact” HIV genomes in her body (meaning, ones that could produce more virus).

Now, Yu’s team has announced the discovery of the “Esperanza Patient.” This elite controller from Argentina contracted HIV in 2013, but had no intact HIV genomes in the 1.19 billion blood cells and 500 million tissue cells the researchers sequenced.

Meaning, not only had these patients controlled the disease, they’d actually destroyed the virus.

“A sterilizing cure for HIV has previously only been observed in two patients who received a highly toxic bone marrow transplant,” Yu told CNN. “Our study shows that such a cure can also be reached during natural infection — in the absence of bone marrow transplants (or any type of treatment at all).”

Looking ahead: With a second case of a naturally sterilizing cure for HIV, the researchers can start comparing the two patients, looking for commonalities that could allow us to produce the same effect in other people with HIV.

“These two women provide dramatic proof that in the right situation people have, within their immune system, the capacity to essentially eradicate all the relevant virus,” Steven Deeks, an HIV expert at UC San Francisco, who was not involved in the studies, told the Times.

“Hiding within these two people is the answer to a riddle, and that riddle is why does the immune system not effectively take care of HIV in the way it does other viruses?” he continued. “There may be a host response we could therapeutically induce to achieve the same outcome in people.”

The big picture: Progress in the war against HIV doesn’t wholly rest on these two women, though.

Several HIV vaccines are at the human trial stage. Two take advantage of the same mRNA tech behind several of the highly effective COVID-19 vaccines. Another is a shot that University of Oxford researchers hope will be able to both protect against HIV and potentially cure those with the disease.

“The prospects of getting to an ‘AIDS-free generation’ may ultimately be successful.”

New treatments and preventative meds are in development, too — Excision BioTherapeutics is poised to begin human testing of a one-and-done HIV treatment, which uses CRISPR to cut out HIV hiding in human cells.

An easier-to-administer form of infection-preventing PrEP meds is on the way, too, which could prevent many of the 1.5 million new infections that still occur each year.

But the San Francisco and Esperanza Patients could be key to ending the war altogether.

“Examples of such a cure that develops naturally suggest that current efforts to find a cure for HIV infection are not elusive, and that the prospects of getting to an ‘AIDS-free generation’ may ultimately be successful,” Yu told CNN. 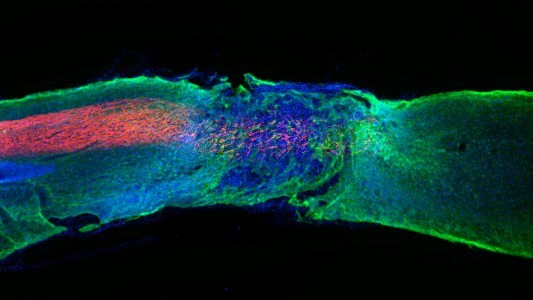 A treatment for spinal cord injuries was able to reverse paralysis in mice by “dancing” to connect with cells near the site of the injury.