The Bill and Melinda Gates Foundation will spend billions of dollars building factories for seven promising coronavirus vaccines, Bill Gates announced during a recent appearance on The Daily Show with Trevor Noah.

It’s been less than six months since the first reported Sars-CoV-2 infection, and already, a number of potential coronavirus vaccines have emerged. Some are even undergoing human testing.

But developing an effective coronavirus vaccine is just one step along the path to ending the COVID-19 outbreak — we then need to manufacture hundreds of millions of doses to distribute to people throughout the world.

“The only thing that really lets us go back completely to normal is to create a vaccine.”

As Gates noted in an op-ed for the Washington Post, many of the most promising coronavirus vaccines require unique, specialized equipment to manufacture, which leaves the world with two choices.

We can wait until one of the in-development coronavirus vaccines proves it deserves a widespread rollout and then build a factory to mass produce it, which will save money but waste valuable time.

Or we can build factories for the most promising vaccines now. Most of the factories will never be necessary — even if all seven vaccines work, we’ll probably only produce one or two of them — but whichever one comes out ahead, everything will be in place to begin mass producing it the moment it’s ready.

Gates noted in the Washington Post that most private companies wouldn’t be able to take on the kind of financial risk required by the second option — pouring billions into a factory that might never get used — but the federal government could.

The day before his op-ed was published, the federal government and Johnson & Johnson collectively pledged $1 billion toward preparing the pharmaceutical giant’s own vaccine candidate.

Gates, apparently, wasn’t willing to wait to see if the federal government would diversify its investments. Just two days after WaPo published his op-ed, Gates announced that the Gates Foundation will fund the creation of seven factories for coronavirus vaccines.

“Even though we’ll end up picking at most two of them, we’re going to fund factories for all seven, just so that we don’t waste time in serially saying, ‘OK, which vaccine works?’ and then building the factory,” Gates told Daily Show host Trevor Noah.

“It’ll be a few billion dollars we’ll waste on manufacturing for the constructs that don’t get picked because something else is better,” Gates said. “But a few billion in this situation where there’s trillions of dollars being lost economically, it is worth it.”

This isn’t the first time the Gates Foundation has gotten involved in the battle against the COVID-19 pandemic.

In early February, it committed up to $100 million toward global coronavirus detection, isolation, and treatment efforts. The following month, it dedicated $50 million to the COVID-19 Therapeutics Accelerator, a collaboration with Wellcome and Mastercard to find coronavirus treatments.

But detection and treatment aren’t the key to overcoming the pandemic, according to Gates — we need to vaccinate the world against it.

“The ultimate solution, the only thing that really lets us go back completely to normal and feel good about sitting in a stadium with lots of other people is to create a vaccine,” he told Noah. “And not just take care of our country but take that vaccine out to the global population so that we have vast immunity and this thing, no matter what, isn’t going to spread in large numbers.”

During his Daily Show appearance, Gates didn’t mention which seven coronavirus vaccines the Foundation plans to focus its efforts on.

We can only hope that the group contains at least one vaccine that could immunize the world against the coronavirus — because if it does, we’ll be able to start mass-producing the vaccine the minute it’s ready. 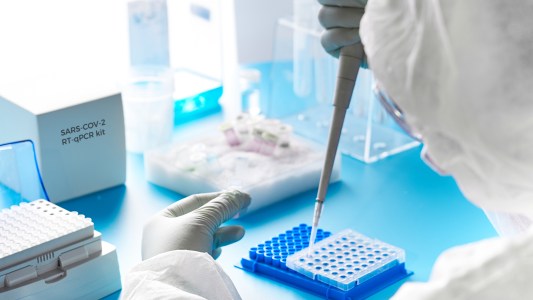 Researchers across the globe are testing the efficacy of group coronavirus testing — using one kit for multiple patients — with promising results.