The UK’s National Health Service (NHS) has launched the world’s first trial to deliver chemotherapy via drone — a move that could make receiving cancer treatment cheaper, more convenient, and less taxing on patients and the environment.

“I want England to become a world leader in cancer care, and using the latest technology to deliver chemo by drone means patients will have quicker, fairer access to treatment no matter where they live,” said Sajid Javid, the UK’s former health secretary.

The challenge: Cancer patients living on the Isle of Wight, off England’s southern coast, often have to travel to the mainland to receive chemotherapy, which means multiple car rides and a ferry or hovercraft.

Repeatedly making that 3-4 hour round-trip journey could be taxing for anyone, but it’s not hard to imagine someone going through chemotherapy downright dreading it.

“Patients will have quicker, fairer access to treatment no matter where they live.”

Drone deliveries: NHS and British startup Apian have now launched a trial that will use medical drones to transport chemotherapy from Portsmouth to St Mary’s Hospital on the Isle of Wight.

The flight will take just 30 minutes, and once the drugs arrive, hospital staff will distribute them, meaning patients won’t have to leave the island to get their cancer medications.

Why it matters: Not only will the drone deliveries save Isle of Wight residents from the hassle of making the trip to the mainland for chemotherapy, it will also presumably cut their transportation costs.

The scheme should reduce carbon emissions, too, given that the drones are electric, and the vehicles and ferries patients would take are likely powered by fossil fuels.

Looking ahead: The NHS and Apian plan to launch a trial in Northumbria, in northern England, too. If the trials go well, the partners envision using drone deliveries to send medical equipment and other treatments to UK healthcare workers the same day they order them.

“This project marks a very important first step in the construction of a network of drone corridors connecting hospitals, pathology labs, GP surgeries, care homes and pharmacies up and down the country,” said Apian CEO Alexander Trewby.

Dr. Drone: The NHS’s chemotherapy trial is just one example of how drones are being used in healthcare — we’ve also seen them ferry transplant organs to hospitals, medical supplies to people in war zones, defibrillators to cardiac arrest victims, and more.

Drones have transported coronavirus tests to labs, too, and some have been loaded up with insecticides to spray on disease-transmitting mosquitoes.

While many of these applications have been trials, the largely positive outcomes suggest we’re headed toward a future in which medical drones regularly play a role in keeping us healthy. 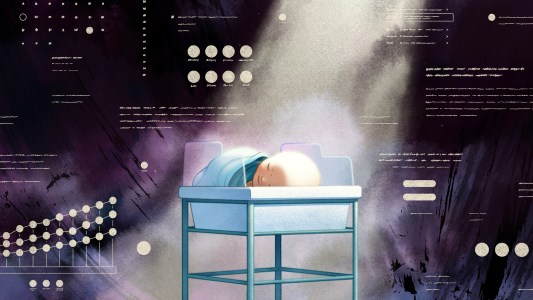 After losing his daughter, a father found a way to help other NICU parents.

Medicine
He lost his baby daughter. Then he turned his grief into a tool for NICU parents.
Subscribe to Freethink for more great stories
Subscription Center
Sections
Video
Freethink
Subscribe
We focus on solutions: the smartest people, the biggest ideas, and the most ground breaking technology shaping our future.
Subscribe