When a chemical called oxalate builds up in urine, it can cause repeated, agonizing recurrences of kidney stones— left unchecked, it can lead to kidney damage or even failure.

Cambridge-based biotech Synlogic is developing an engineered bacteria meant to treat this disorder, called enteric hyperoxaluria (EH), caused by some intestinal diseases like Crohn’s and surgically-induced short bowel syndrome, which can increase oxalate absorption from food.

The company has recently announced the results of a small phase 1b clinical trial for their candidate therapeutic, called SYNB8802. The bacteria-based drug was found to be safe and tolerable, and it appeared to reduce the levels of oxalate in the urine of patients with past gastric-bypass surgery.

“A subset of enteric patients have repeated kidney stones and life-altering disease that is particularly challenging to manage,” Kyle Wood, an associate professor of urology at the University of Alabama at Birmingham, said in a Synlogic release.

A new potential treatment option: With no current FDA-approved therapeutics for EH patients, the typical recourse is increasing fluids to flush the kidneys and eating restricted diets featuring low-oxalate foods. That not only means missing out on delicious snack staples like potato chips but also leafy greens like spinach — and its efficacy is only as good as its adherence.

Synlogic’s candidate is a genetically engineered form of the bacteria E. coli Nissle, the same basic bug the company has reengineered to treat other conditions, including phenylketonuria, a deadly genetic disorder that also requires a severe, regimented diet.

According to Synlogic’s results presentation, the EH-treating E. coli are designed to devour oxalate while it is still in the GI tract, with the knock-effect of keeping it out of urine.

The study: The small phase 1b study — double-blind, randomized, placebo-controlled, and inpatient — enrolled 11 patients with a history of Roux-en-Y gastric bypass surgery.

After a three-day diet and placebo period, the patients were split into randomized groups, some receiving the treatment and others a placebo over 12 days. The therapy group received a lower dose for the first six days, and a higher dose for the second — and, reassuringly, the reduction of oxalate in urine was found to be correlated with dose size.

The treatment uses engineered bacteria designed to devour oxalate while it is still in the GI tract.

To help ensure the changes in oxalate were from the drug, patients had their diet controlled during the study. Urine samples were collected from every patient every day.

At the lower dose, the 7 treated patients who received the treatment saw a 28% reduction in their baseline urinary oxalate readings compared to placebo; at the higher dose, they saw a 38% reduction.

As to the engineered bacteria’s safety and tolerability — the study’s main endpoints — there were no serious adverse events. The mild and passing GI events that did happen occurred at similar rates in the placebo and therapy group.

It’s worth noting that this is a small study, conducted in very controlled conditions, and further research will be needed to show that the treatment works to prevent kidney stones in the real world.

However, in addition to this proof-of-concept study, there is also another outpatient study of SYNB8802 — the company says full results for both will be presented at “a future medical meeting.”

Food
Harvard and Kraft Heinz are trying to make sugar healthier
Instead of replacing sugar, Wyss scientists had an idea: what if they change sugar to make it healthier?
By B. David Zarley

Biology
Genetically engineered bacteria make living materials for self-repairing walls and cleaning up pollution
With just an incubator and some broth, researchers can grow reusable filters made of bacteria to clean up pollution and more.
By Sara Molinari

Biology
Axolotls can regenerate their brains
Axolotls are a model organism researchers use to study a variety of topics in biology because of their regenerative abilities.
By Ashley Maynard
Up Next 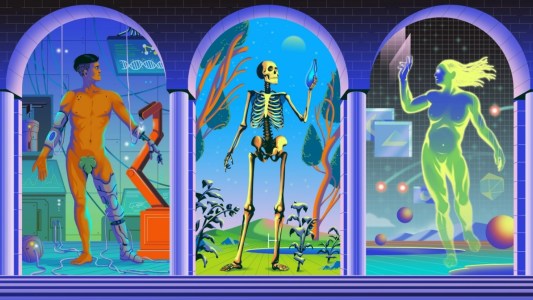 While many of the technologies upon which transhumanists base their dream are real and world-changing, they have major limitations.