Eight out of 10 people who survive a stroke are left with hemiparesis, a condition characterized by a weakness on one side of the body, which can make walking or even standing difficult.

Now, scientists have created a lightweight robotic exosuit to help people with the condition walk both faster and further — a development that could improve stroke survivors’ quality of life.

An Exosuit for Stroke Survivors

After a stroke, survivors often exhibit what’s known as a “drop foot,” meaning they have trouble lifting the foot on their affected side from the ankle.

This new exosuit helps overcome that condition by applying mechanical force to the ankle joint.

This force is designed to assist with two specific movements that take place during walking: plantar flexion (the ankle motion that pushes the foot down onto the ground) and dorsiflexion (the motion of pulling the toes toward the shin while lifting the foot up).

The exosuit can be worn on either leg and weighs just 11 pounds.

The exoskeleton itself looks a bit like a leg warmer. Cables run from the ankle to a lightweight fabric-based anchor around the calf. Other cables run from that anchor to a battery and a motor that are worn on the hip.

To test the system, the researchers found six stroke survivors with hemiparesis to participate in a study, which has been published in IEEE Open Journal of Engineering in Medicine and Biology (OJEMB).

First, they asked the participants to walk as fast as they could down a 98-foot-long walkway, both with and without use of the exosuit.

When asked to walk as far as they could in six minutes, the study participants walked an average of 109 feet farther with the exosuit than without it. One person added a remarkable 328 feet to their maximum distance.

“(W)e saw important and immediate improvements in walking speed and distance which are meaningful outcomes that make a real difference in everyday lives of individuals who have sustained a stroke,” researcher Terry Ellis said in a press release.

This isn’t the first example of a robotics system designed to help with mobility — we’ve previously seen people with paralysis walk and even run marathons thanks to advanced exoskeletons.

But while those exoskeletons can be life-changing for people with paralysis, they aren’t ideal for stroke survivors with hemiparesis.

We saw important and immediate improvements in walking speed and distance.

For one, they’re typically designed for both legs — people with hemiparesis only need something to help strengthen one side of their body.

Secondly, they’re often heavy. That’s not a huge problem when the system itself is doing most of the work, but stroke survivors need something to help them walk, not something that can walk for them.

They’d need to exert extra energy to move a heavy exoskeleton, which means they might actually move slower with it than without it.

The exosuit, however, can be worn on either leg and weighs just 11 pounds. It’s unobtrusive enough that it didn’t hinder participants’ walking ability when worn but powered off — they could walk just as far and as fast as they could before donning the high-tech system.

Now that this small study has shown the researchers how their system can help stroke survivors, they’re eager to continue developing the tech.

“Our engineering and clinical teams at Harvard and Boston University are highly motivated by these results to refine the technology and study its immediate impact in stroke survivors with a wide range of walking abilities,” researcher Lou Awad said in the press release.

“We are also eager to explore therapeutic applications in both clinical settings and day-to-day walking in the home and community,” he added. 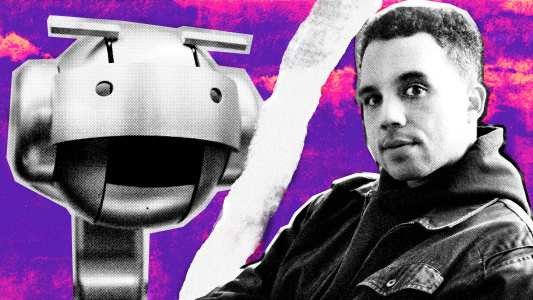 Robotics
Can a robot really freestyle?
7:08
By Doug Dais
Subscribe to Freethink for more great stories
Subscription Center
Sections
Video
Freethink
Subscribe
We focus on solutions: the smartest people, the biggest ideas, and the most ground breaking technology shaping our future.
Subscribe