A clinical trial for a coronavirus vaccine was launched on Monday, March 16, a United States government official has told the Associated Press (the official spoke on the condition of anonymity as the news has not been made public).

Massachusetts-based biotech company Moderna Inc. co-developed the vaccine, mRNA-1273, with the National Institutes of Health (NIH), which is funding the clinical trial.

45 participants will each receive doses of the vaccine to test it for any troubling side effects.

Over the course of the trial, now taking place at Seattle’s Kaiser Permanente Washington Health Research Institute, 45 young, healthy participants will each receive different doses of the vaccine to test it for any potentially troubling side effects — if all goes well, a larger follow-up trial will test its efficacy at stimulating immunity.

As of February, Moderna expected that its coronavirus vaccine wouldn’t reach the human trial stage until April — meaning the potentially life-saving vaccine is ahead of schedule.

Many common vaccines, such as the one that inoculates a person against the flu, work by introducing a weakened or dead version of an antigen — the molecule that prompts an immune response, such as a virus or bacteria.

This exposure to a less robust version of the antigen gives a person’s immune system a chance to produce antibodies for it. Then, if the person becomes infected with the real deal, those antibodies will quickly recognize and attack the antigen.

Rather than using an antigen for its vaccine — such as a dead version of the virus itself — Moderna developed a vaccine based on messenger RNA (mRNA).

Messenger RNAs are genetic molecules tasked with carrying instructions from the DNA, in a cell’s nucleus, to the part of the cell that makes proteins. Moderna’s coronavirus vaccine contains synthetic mRNA that instructs the body’s cells to produce the exact antibodies we want against the novel coronavirus (officially known as SARS-CoV-2).

Instead of trying to find the right antigen that prompts the body to respond the right way, the mRNA approach cuts out the middleman and goes directly to the immune cells responsible for producing antibodies.

Moderna’s approach to inoculation is still incredibly experimental, and regulators have yet to approve a genetics-based vaccine for anything.

However, if proven safe and effective, an mRNA vaccine could offer several advantages over today’s antigen-containing vaccines. According to a University of Cambridge report, they require less time and money to produce, so they are easier to scale up, and since they don’t involve the use of an antigen itself, they could be safer for patients.

If Moderna’s coronavirus vaccine does well in clinical trials, it could be ready for use in a year to 18 months. In February, the company estimated that they had the capacity to produce up to 100 million doses of coronavirus vaccine in 12 months, if they devoted all of their resources to it.

However, even if the company’s experimental approach doesn’t pan out, it’s just one of dozens of organizations racing to develop a vaccine for COVID-19 — meaning mRNA-1273 might currently be our best hope for a coronavirus vaccine, but it’s far from our only one. 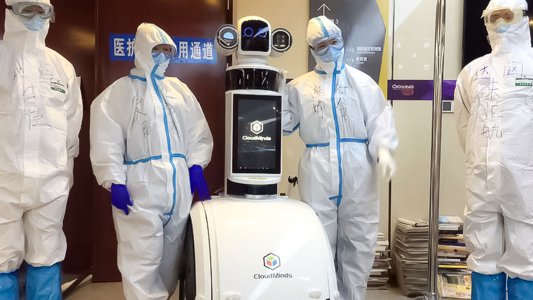 A robot-run coronavirus hospital in Wuhan, China, is just one remarkable example of how technology is helping combat the global COVID-19 outbreak.

Coronavirus
The coronavirus hospital staffed by robots
By Kristin Houser
Subscribe to Freethink for more great stories
Subscription Center
Sections
Video
Freethink
Subscribe
We focus on solutions: the smartest people, the biggest ideas, and the most ground breaking technology shaping our future.
Subscribe