The professor of biomedical engineering realised that, although his son’s condition could not have been prevented, the family could have managed his lifestyle very differently had they known about his condition.

So, he embarked on a mission to help people change their lifestyles and avoid getting sick.

Lifestyle, he says, has a “huge impact” on many undiagnosed conditions such as diabetes and high blood pressure. Changing behaviour could save lives.

The result of his research is a simple wristband that uses your DNA to help you make healthy choices as you shop for groceries.

By analysing the part of your genetic code determining susceptibility to nutrition-related health conditions like diabetes, DNANudge tells you which foods are best for you, and which you should avoid.

Shopping with your DNA

The wristband scans shop barcodes and shows a green light if a product is OK and red if it may be harmful in the long run. The wristband’s linked smartphone app suggests healthier alternatives when the red light comes on.

Following his son’s acute illness, Toumazou also invented a microchip that can read an individual’s DNA from a simple mouth swab sample. It’s now used to upload a DNA profile to the new wristband – a process that takes an hour instead of up to eight weeks for a conventional DNA test.

“We’re not telling people they can’t eat biscuits, that they should eat grapes. No, they can eat biscuits, but eat the better biscuits based upon your DNA and lifestyle,” says Toumazou.

“It’s using biology to nudge and guide you to have a healthier lifestyle in the long term.”

The device also helps to promote overall health by warning if you are inactive for too long. An orange light means it’s time to get up and move about.

One in 10 people with pre-diabetes, a reversible condition, will go on to develop type 2 diabetes, which affects more than 400 million people worldwide. Early diagnosis can enable people to change their lifestyles and avoid developing the full-blown condition.

And what about Toumazou’s son Marcus? Well, his story has a happy ending. After months in dialysis he received a kidney transplant and is now in good health.

He even met the Queen at the opening of his father’s new lab in London. He told her his father was changing healthcare by making microchips for the human body. 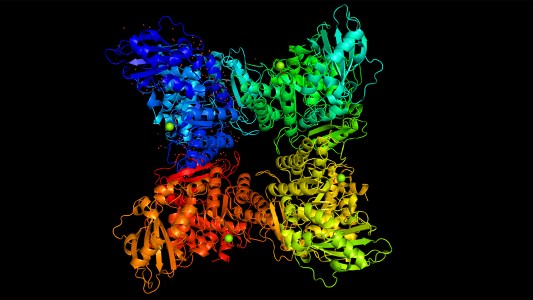 Researchers have resurrected an ancient version of the enzyme Rubisco in the hope of supercharging photosynthesis in today’s plants.

Agriculture
An ancient enzyme could supercharge photosynthesis
Subscribe to Freethink for more great stories
Subscription Center
Sections
Video
Freethink
Subscribe
We focus on solutions: the smartest people, the biggest ideas, and the most ground breaking technology shaping our future.
Subscribe