“I was intrigued,” says Ron Fouchier, in his rich, Dutch-accented English, “in how little things could kill large animals and humans.”

This fascination led the silver-haired virologist to venture into controversial gain-of-function mutation research — work by scientists that adds abilities to pathogens, including experiments that focus on SARS and MERS, the coronavirus cousins of the COVID-19 agent.

If we are to avoid another influenza pandemic, we will need to understand the kinds of flu viruses that could cause it. Gain-of-function mutation research can help us with that, says Fouchier, by telling us what kind of mutations might allow a virus to jump across species or evolve into more virulent strains. It could help us prepare and, in doing so, save lives.

Many of his scientific peers, however, disagree; they say his experiments are not worth the risks they pose to society.

A Virus and a Firestorm

The Dutch virologist, based at Erasmus Medical Center in Rotterdam, caused a firestorm of controversy about a decade ago, when he and Yoshihiro Kawaoka at the University of Wisconsin-Madison announced that they had successfully mutated H5N1, a strain of bird flu, to pass through the air between ferrets, in two separate experiments. Ferrets are considered the best flu models because their respiratory systems react to the flu much like humans.

The mutations that gave the virus its ability to be airborne transmissible are gain-of-function (GOF) mutations. GOF research is when scientists purposefully cause mutations that give viruses new abilities in an attempt to better understand the pathogen. In Fouchier’s experiments, they wanted to see if it could be made airborne transmissible so that they could catch potentially dangerous strains early and develop new treatments and vaccines ahead of time.

The problem is: their mutated H5N1 could also cause a pandemic if it ever left the lab. In Science magazine, Fouchier himself called it “probably one of the most dangerous viruses you can make.”

A minimum of three mutations may be all that’s needed for a virus in the wild to make the leap through the air in mammals. If it does, it could spread. Fast.

Fouchier calculates the odds of this happening to be fairly low, for any given virus. Each mutation has the potential to cripple the virus on its own. They need to be perfectly aligned for the flu to jump. But these mutations can — and do — happen.

H7N9 is another kind of avian flu, like H5N1. The CDC considers it the most likely flu strain to cause a pandemic. In the human outbreaks that occurred between 2013 and 2015, it killed a staggering 39% of known cases; if H7N9 were to have all five of the gain-of-function mutations Fouchier had identified in his work with H5N1, it could make COVID-19 look like a kitten in comparison.

Gain-of-Function Mutation: Creating Our Fears to (Possibly) Prevent Them

Flu viruses are basically eight pieces of RNA wrapped up in a ball. To create the gain-of-function mutations, the research used a DNA template for each piece, called a plasmid. Making a single mutation in the plasmid is easy, Fouchier says, and it’s commonly done in genetics labs.

If you insert all eight plasmids into a mammalian cell, they hijack the cell’s machinery to create flu virus RNA.

“Now you can start to assemble a new virus particle in that cell,” Fouchier says.

One infected cell is enough to grow many new virus particles — from one to a thousand to a million; viruses are replication machines. And because they mutate so readily during their replication, the new viruses have to be checked to make sure it only has the mutations the lab caused.

The virus then goes into the ferrets, passing through them to generate new viruses until, on the 10th generation, it infected ferrets through the air. By analyzing the virus’s genes in each generation, they can figure out what exact five mutations lead to H5N1 bird flu being airborne between ferrets.

“This Work Should Never Have Been Done”

The potential for the modified H5N1 strain to cause a human pandemic if it ever slipped out of containment has sparked sharp criticism and no shortage of controversy. Rutgers molecular biologist Richard Ebright summed up the far end of the opposition when he told Science that the research “should never have been done.”

“When I first heard about the experiments that make highly pathogenic avian influenza transmissible,” says Philip Dormitzer, vice president and chief scientific officer of viral vaccines at Pfizer, “I was interested in the science but concerned about the risks of both the viruses themselves and of the consequences of the reaction to the experiments.”

In 2014, in response to researchers’ fears and some lab incidents, the federal government imposed a moratorium on all GOF research, freezing the work.

But in the meantime, the moratorium stifled some research into influenzas — and coronaviruses.

The National Academy of Science whipped up some new guidelines, and in December of 2017, the call went out: GOF studies could apply to be funded again. A panel formed by Health and Human Services (HHS) would review applications and make the decision of which studies to fund.

As of right now, only Kawaoka and Fouchier’s studies have been approved, getting the green light last winter. They are resuming where they left off.

Here’s the thing: the work is indeed potentially dangerous. But there are layers upon layers of safety measures at both Fouchier’s and Kawaoka’s labs.

“You really need to think about it like an onion,” says Rebecca Moritz of the University of Wisconsin-Madison. Moritz is the select agent responsible for Kawaoka’s lab. Her job is to ensure that all safety standards are met and that protocols are created and drilled; basically, she’s there to prevent viruses from escaping. And this virus has some extra-special considerations.

The specific H5N1 strain Kawaoka’s lab uses is on a list called the Federal Select Agent Program. Pathogens on this list need to meet special safety considerations. The GOF experiments have even more stringent guidelines because the research is deemed “dual-use research of concern.”

There was debate over whether Fouchier and Kawaoka’s work should even be published.

“Dual-use research of concern is legitimate research that could potentially be used for nefarious purposes,” Moritz says. At one time, there was debate over whether Fouchier and Kawaoka’s work should even be published.

While the insights they found would help scientists, they could also be used to create bioweapons. The papers had to pass through a review by the U.S. National Science Board for Biosecurity, but they were eventually published.

Intentional biowarfare and terrorism aside, the gain-of-function mutation flu must be contained even from accidents. At Wisconsin, that begins with the building itself. The labs are specially designed to be able to contain pathogens (BSL-3 agricultural, for you Inside Baseball types).

They are essentially an airtight cement bunker, negatively pressurized so that air will only flow into the lab in case of any breach — keeping the viruses pushed in. And all air in and out of the lap passes through multiple HEPA filters.

Inside the lab, researchers wear special protective equipment, including respirators. Anyone coming or going into the lab must go through an intricate dance involving stripping and putting on various articles of clothing and passing through showers and decontamination.

And the most dangerous parts of the experiment are performed inside primary containment. For example, a biocontainment cabinet, which acts like an extra high-security box, inside the already highly-secure lab (kind of like the radiation glove box Homer Simpson is working in during the opening credits).

“Many people behind the institution are working to make sure this research can be done safely and securely.”

The Federal Select Agent program can come and inspect you at any time with no warning, Moritz says. At the bare minimum, the whole thing gets shaken down every three years.

There are numerous potential dangers — a vial of virus gets dropped; a needle prick; a ferret bite — but Moritz is confident that the safety measures and guidelines will prevent any catastrophe.

No human harm has come of the work yet, but the potential for it is real.

“Nature Will Continue to Do This”

They were dead on the beaches.

In the spring of 2014, another type of bird flu, H10N7, swept through the harbor seal population of northern Europe. Starting in Sweden, the virus moved south and west, across Denmark, Germany, and the Netherlands. It is estimated that 10% of the entire seal population was killed.

The virus’s evolution could be tracked through time and space, Fouchier says, as it progressed down the coast. Natural selection pushed through gain-of-function mutations in the seals, similarly to how H5N1 evolved to better jump between ferrets in his lab — his lab which, at the time, was shuttered.

“We did our work in the lab,” Fouchier says, with a high level of safety and security. “But the same thing was happening on the beach here in the Netherlands. And so you can tell me to stop doing this research, but nature will continue to do this day in, day out.”

Critics argue that the knowledge gained from the experiments is either non-existent or not worth the risk; Fouchier argues that GOF experiments are the only way to learn crucial information on what makes a flu virus a pandemic candidate.

“If these three traits could be caused by hundreds of combinations of five mutations, then that increases the risk of these things happening in nature immensely,” Fouchier says.

“With something as crucial as flu, we need to investigate everything that we can,” Fouchier says, hoping to find “a new Achilles’ heel of the flu that we can use to stop the impact of it.” 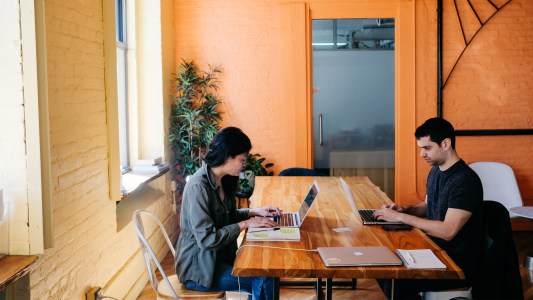 More than 25 Y Combinator startups have joined the COVID-19 response effort — find out how you can help these businesses fighting the coronavirus.