Ubiquitous and sneaky, herpesviruses are among the most successful human viruses — and among science’s most challenging foes.

Now, a new Nature study has unraveled the secret of how these invaders break into the nervous system — and potentially how to stop them.

Invade and occupy: After the initial infection, these viruses — responsible for cold sores, genital herpes, chickenpox, shingles, mononucleosis, and infant rashes like roseola — hide out in the cells of the nervous system for life, lying dormant and making themselves difficult to detect.

The latent herpesvirus lies in wait, until the perfect opportunity presents itself (say, a big meeting with your boss) and then reawakens, leading to symptoms like cold sores (in the case of HSV-1) or shingles (in the case of the varicella-zoster virus).

This nasty trick makes the herpesvirus impossible to eliminate; it can be controlled, but not killed — and while there is now a chickenpox vaccine, the eight other kinds of herpesvirus that infect humans have no vaccines.

But a new study from researchers at Northwestern University, Albert Einstein Medical College, and the University of Nebraska-Lincoln may have finally figured out herpesvirus’ trick to a lifelong infection.

It turns out, the virus is kidnapping machinery from your own cells, then carrying it from cell to cell to invade nerve cells.

“We call the process assimilation,” Northwestern’s Gregory A. Smith, a study author, tells me.

“And the reason we had the ego to give it a new term is because no other viruses to date — [I’ve been] talking to people for over a year about this — are known to capture proteins from a cell and turn them.”

The perfect: Unlike SARS-CoV-2, Ebola, and other headline-grabbing viruses, human herpesviruses are not zoonotic, jumping from animal reservoirs (like bats) to humans.

They are native to people, stalking us for probably millions of years and evolving with us.

Herpesvirus hides in the cells of your nervous system, lying in wait, avoiding the immune system; it’s possible to control, but not kill.

Herpesvirus is so successful because it hides so well, often spreading from asymptomatic carriers, then occupying nerve cells for life.

There are not many viruses which even can infect neurons, Smith says — and none of them do it as well as herpes.

Virus marathon: Viruses move around inside cells on structures called microtubules, which are basically tiny train tracks. The invaders snatch up your cells’ little “engines” (proteins called dynein and kinesin), then use them to drive toward the center of the cell.

When a virus like influenza or SARS-CoV-2 enters your cells, it grabs an engine and then just rambles around, eventually making its way to where it can hijack the cell and make more viruses.

That random wandering is all well and good when you’re dealing with a little respiratory cell. But a nerve cell is a horse of a different color.

Not many viruses can infect neurons — and none as well as herpes.

“One thing that’s interesting about neurons is that they are these extremely long cells,” Smith says — we’re talking centimeters, which compared to a virus is absolutely enormous.

Herpesviruses use one engine, dynein, to make the journey down the long, skinny part of the nerve, called the axon — what Smith’s lab calls “the marathon run.”

But then, there’s a problem for the virus: the axon doesn’t make it all the way to the nucleus. It ends at a different cell structure, called the centrosome, like a train station at the end of the line.

To get to the nucleus, herpes needs to pick up some kinesin engines — without getting carried backwards up the axon — and then find the track that connects it to the nucleus.

But when researchers introduced herpes to neurons that were engineered to not have kinesin, they were in for a surprise: the virus still made its way to the nucleus.

But how? Where was the kinesin coming from?

Kinesin kidnapping: When a herpesvirus initially infects you, its beachhead is the cells of the mucous membranes of your skin. There, it replicates, potentially creating its signature cold sore or pox, before retreating to the nerve cells to hide from the immune system.

But it’s doing more than replicating there: it’s also kidnapping their kinesin engines — and assimilating them, Borg-style. When the viruses invade the nerve cells and the last stop on the axon, they whip out their kidnapped kinesin and drove their way to the nucleus.

To uncover the kidnapping, the team used a tool developed by University of Michigan researcher Kristin Verhey. Verhey’s tool allowed them to attach an on/off switch to the kinesin in the skin cells that the herpesviruses are grown in.

When those viruses were introduced to the nerve cells and had the “off” switch thrown, they couldn’t make it to the nucleus, instead causing a pileup in the centrosome — the end of line.

“This is the first discovery of any virus repurposing a cellular protein and using it to drive subsequent rounds of infection,” study lead author Caitlin Pegg said.

So why does herpesvirus steal kinesin from the skin cells, instead of grabbing it inside the neuron?

Nobody knows. But the virus couldn’t make it to the nucleus without its kidnapped engine — when the skin cell kinesin was turned off, it couldn’t reach the nucleus, even when the kinesin in the neuron was left alone.

Why you should care: We may not yet know why herpesvirus likes to kidnap kinesin, but the discovery could prove to be important — and not just for herpesviruses.

Nature rarely abandons an effective idea, and the virus world is a ruthless meritocracy. Now that researchers know assimilation is possible, we may find out that other viruses are deploying similar tricks.

Figuring out how herpesvirus hides can also be an important step to creating a herpes vaccine and new antivirals.

Some of our most successful vaccines use live viruses that have been weakened. Weakened herpesviruses could be effective in provoking an immune response, but they have proven difficult to make.

“Live-attenuated herpes simplex vaccines are a significant design challenge,” Smith told me via email. “Ideally, the vaccine should stay out of the nervous system, but how to stop that from happening was unclear.”

“They are, in a sense, the greatest scientists of all. They’ve been studying us for longer than we’ve been self-aware that we were people in the first place.”

If a vaccine was built using herpesviruses that were mutated to not be able to assimilate the kinesin, however, then a live-attenuated vaccine may be on the table.

“Upon vaccination, such a live-attenuated virus would infect the mucous membranes,” producing an immune response, Smith said, “but then would not be able to run and hide in the nervous system.”

Antivirals aimed at this important stage could also throw a wrench in the virus’ replication cycle; a process unique to a certain virus is a prime target for an antiviral drug.

But big picture, understanding the way a virus that knows us so well works can also help us humans learn about ourselves.

“They are, in a sense, the greatest scientists of all,” Smith says. “They’ve been studying us for longer than we’ve been self-aware that we were people in the first place.” 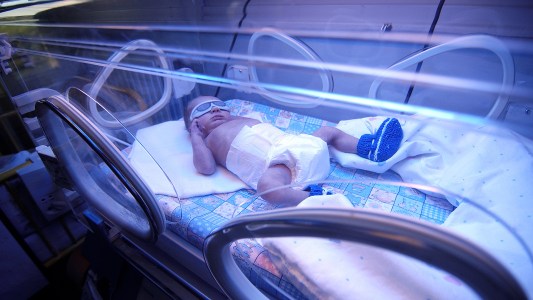 Researchers in Australia and Iraq have developed a system that uses a webcam to catch infant jaundice and begin treatment right away.

Medicine
A simple webcam can automatically catch — and treat — infant jaundice
By B. David Zarley
Subscribe to Freethink for more great stories
Subscription Center
Sections
Video
Freethink
Subscribe
We focus on solutions: the smartest people, the biggest ideas, and the most ground breaking technology shaping our future.
Subscribe