Welcome back, you Dope Science devotees, you insatiable Drug Guide initiates, you beautiful bowl packers, hitters, and passers. The time you knew would come at last has come at last, as we hit the big name: marijuana.

Medical cannabis is everywhere, and legal recreational pot is speeding across this great nation like a vintage conversion van in 1969. The only thing that’s shifting faster than the legal landscape is the state of cannabis science.

Pot. Ganja. Cannabis sativa. That beautiful green stuff you’re thinking of are the flower buds of female cannabis plants. Beyond that, things can get complicated. There are about as many marijuana strains as there are Rihanna hits. And given the growing number of states where weed is legal, cultivating new types of marijuana is now a big business. (That business is still all a little tricky, though — federal law still considers the drug Schedule I, with a “high potential for abuse” and “no accepted medical use.”)

There is a lot of stuff in marijuana, but for recreational users, it usually comes down to three letters: THC. Cannabis buds contain THC or tetrahydrocannabinol, the psychoactive compound that creates pot’s characteristic high.

After being absorbed through the GI system (like from edibles) or the lungs (like from smoking or vaping), THC hits the bloodstream and is carried to cannabinoid receptors in the brain. This produces a range of pleasant experiences, charmingly characterized by the narcs at the DEA as “Merriment, happiness, and even exhilaration.”

Another perk mentioned by the DEA? “No deaths from overdose of marijuana have been reported.”

Medical cannabis has been hailed either as a miracle drug or decried as the devil’s doing, portending a future landscape of Lazaruses or zoned-out phantoms.

The reality’s a little different — it’s best to think of medical cannabis like any other drug compound. Some of the benefits of marijuana have pretty strong science behind them. Others are anecdotal. And there’s no shortage of folks out there looking to peddle snake oil or further their own financial, cultural, or political interests.

Perhaps the best science-based benefits of marijuana (and its related chemicals) are for treating rare forms of epilepsy that can’t be controlled with other drugs. Cannabidiol (CBD), in particular, has been shown to reduce seizures in patients with Dravet syndrome, a severe, lifetime form of epilepsy that begins before a child is one year old.

Peter Grinspoon, a teacher at Harvard Medical School and staffer at Massachusetts General Hospital, writes in the Harvard Health Blog that videos of the CBD taking effect are “dramatic.” In 2018, the FDA approved the first ever marijuana-derived drug, the CBD-based Epidiolex, to treat Dravet.

Medical cannabis is also used in the treatment of neuropathic pain, pain caused by nerve damage. The NIH isn’t super keen on this; they claim the benefits seem marginal compared to placebos, and that existing research is low-quality. Same thing goes for marijuana helping decrease opioid addiction in places where it is legal to access — conflicting data, experts disagree, jury’s out. Still, there’s enough evidence to suggest some analgesic quality here.

Better backed by science are the benefits of marijuana in treating the nausea of chemotherapy patients (anecdotally, anyone who’s ever used the “wake and bake” method of hangover recovery can attest to this). Marinol, a synthetic version of THC not derived from cannabis, was approved by the FDA in 1985 to treat chemo nausea and anorexia and in 1992 to treat weight loss in AIDS patients.

The science around medical cannabis is whipsawed by two related factors. One is that, because of federal marijuana legislation, it is difficult for scientists to (legally) get access to high-quality marijuana to study. And that Schedule I classification comes down to people’s political perspective. Those deeply held cultural views make understanding the science muddy. You get messages either about marijuana fixing everything or being the root of all evil.

This may soon get better, at least on the science front. Per NPR, the DEA announced this past summer that they’re finally going to begin processing applications from people who want to grow marijuana strains for research. Right now, the only approved stuff comes from the University of Mississippi, and apparently it’s schwag.

And while weed is safer than a lot of other drugs out there, there are actual medical issues possible. This can include stuff like anxiety, paranoia, and coordination loss — don’t drive high, my dude — as well as social costs, like arrests and losing job opportunities. As always, the Drug Guide urges readers to be safe and responsible. 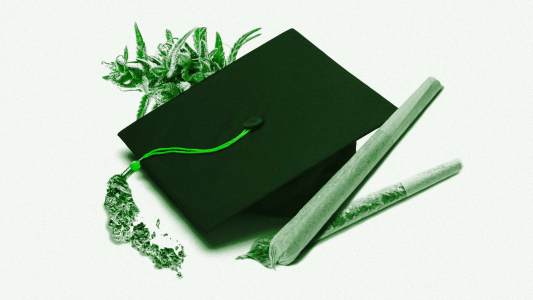 As medical marijuana becomes mainstream, so does the need for an educated workforce in the industry. Enter the nation’s first-ever cannabis degree program.

Drugs
Legal pot is finally growing up and going to college
Subscribe to Freethink for more great stories
Subscription Center
Sections
Video
Freethink
Subscribe
We focus on solutions: the smartest people, the biggest ideas, and the most ground breaking technology shaping our future.
Subscribe