In his titular epic, the warrior Beowulf — easily the most metal of your high school English class characters — faces the human-devouring monster Grendel, who sneaks into a king’s hall and slaughters his men at night. Undaunted, Beowulf ditches his weapons, lies in wait in the dark, rips the beast’s arm off and — at least in my imagining — beats him with it.

Now, faced with human-devouring monsters of our own generation, scientists are exploring the same mists of the past that Beowulf moved through, hunting for modern cures in medieval medicine.

Our relentless carpet bombing of bacteria with antibiotics has given rise to a new, more formidable foe: the superbug. The bacteria who have survived our attacks and developed resistance have become  all but impervious to traditional antibiotics — and unfortunately, they don’t have tear-off-able arms.

To head off the microscopic uber Grendals, researchers are racing to find compounds that can act as powerful new antibiotics capable of stopping superbugs, and medieval medicine may hold clues.

A remedy in a medieval manuscript known as Bald’s Leechbook  may prove the importance of studying these potions.

Medieval medicine holding up to modern scrutiny may seem a long(bow) shot. But among the alchemical potions and spiritual superstitions and outright wrong theories of the past — you’re imbalanced, four humors of health!; dissipate, miasma theory! — there are occasional gems.

Ancient medicine from as far back as ancient Egypt and Hippocrates has yielded significant results; both suggested using the bark of a willow tree for pain relief. The Royal Society proved the bark effective in 1763, but Bayer didn’t start selling it as aspirin until a couple hundred years later.

Closer to today, researchers at Emory University discovered some promising compounds in plant-based medicines from the Civil War. Cut off by Lincoln’s embargo from precious resources — including medicine — the Confederates commissioned a book of plants native to the area that could be used as medicine.

According to VICE‘s Rob Dozier, the resulting manual, informed by the practices of Native Americans and slaves, was dusted off by a team at Emory University. Led by Cassandra Quave, a professor of dermatology who is also trained in ethnobotany — the study of plant-based medicine in various cultures — they found that some of the plants proved to have antimicrobial properties, aimed directly at some of the war’s smallest combatants, like Staph.

“I think it’s important to look towards our past to try to understand better how these treatments worked,” Quave told VICE. “We can leverage that historic knowledge to develop better, innovative therapies for the future.”

This new study, published in Scientific Reports, builds off Anglo-Saxon expert Christina Lee’s previous research into one ancient remedy, known as Bald’s eyesalve. The research was the result of Ancientbiotics, a cross-disciplinary group of researchers from the University of Nottingham (yep, really) and the University of Warwick in the UK, as well as American scientists.

The Ancientbiotics team recreated the eyesalve potion — a concoction first recorded in 905 CE — in 2015. In both lab mice and in vitro studies, the medieval medicine proved to be effective against Methicillin-resistant Staphylococcus aureus (MRSA). Incredibly resistant to antibiotics, this Gram-positive Grendel can cause deep, painful abscesses and can penetrate even deeper into bones, blood, the heart, and lungs — a potentially fatal turn of events.

A biofilm is kind of what it sounds like: a blanket of bacteria that grows on a surface. This layering can work like a shield, making superbugs even harder to kill. The medieval potion was found to have anti-biofilm properties, stopping a whole suite of nasties from forming biofilms — but only if the ingredients were used in combination.

The potion’s ingredients are pretty wild: onion, garlic, wine, and cow’s bile salts. But no single ingredient was found to be responsible for the results.

“Most antibiotics that we use today are derived from natural compounds, but our work highlights the need to explore not only single compounds but mixtures of natural products for treating biofilm infections,” University of Warwick microbiologist Freya Harrison said in a press release.

The future of finding new antibiotics from ancient and Medieval medicine could be improved by studying the ingredients in combinations, said Harrison. Bald’s eyesalve, for example, could lead to new treatments for infected wounds, like diabetic lower extremity ulcers.

As one may expect from a potion from one of the world’s earliest known medical books, Bald’s eyesalve does have some adverse effects: chief among them, low-level damage to human cells. But since the damage was minimal, Harrison said, it still holds potential for new superbug treatments.

Science is scrambling for those treatments, trying everything from training the body to fight drug resistant bacteria to teaming up with viruses called phages to using, appropriately enough, dragon’s blood.

Getting different scientific disciplines together may prove key, and that includes for unlocking the secrets of ancient and medieval medicine. Lee isn’t a microbiologist, and the microbiologists need Lee’s translation.

“Bald’s eyesalve underlines the significance of medical treatment throughout the ages,” Lee said in the Warwick release.

“It shows that people in Early Medieval England had at least some effective remedies. The collaboration which has informed this project shows the importance of the arts in interdisciplinary research.” 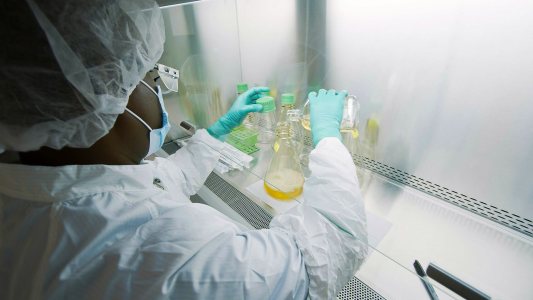 A pair of new trials will test the ability of designer antibodies to not only treat COVID-19, but also potentially prevent coronavirus infections.