Despite its cultural cache as a scourge of the West, and a sharp rise in overdoses, meth lags behind opioids and alcohol in a crucial measure: the availability of pharmacological interventions.

Doctors’ options are few, and patient outcomes after leaving urgent care are up in the air.

“I’d offer a turkey sandwich and some resources, and send them on their way,” ER doctor Thomas Robey told STAT’s Lev Facher.

“That was the standard treatment: Compassion, reassurance, an exam to make sure there aren’t infections or injuries … and connect them with as many social resources as possible, which in a community setting is usually not very many.”

But cold cuts may soon be replaced as the frontline weapon of choice. At the Providence Regional Medical Center, in meth-hit Everett, north of Seattle, Robey has been treating patients with new monoclonal antibodies designed to glom onto methamphetamine and keep it from accessing the brain, Facher reported.

It’s one of a new — albeit small — wave of meth therapies and interventions being developed in the midst of need; the drugs naltrexone and buproprion have shown promise for treating methamphetamine use disorder as well.

“In terms of absolute numbers, the group that’s most negatively affected by methamphetamines are American Indians and Alaska Natives and the difference is gigantic,” NIDA’s Nora Volkow, who co-authored a JAMA study on the issue, told NPR.

Meth is easily available in Native communities, Cheyenne tribal member Winnie White Tail, who runs the George Hawkins Memorial Treatment Center in Oklahoma, told NPR. It has also made inroads into black communities where it was a rarity previously.

Fentanyl, as is its wont, has also made the situation worse; meth laced with the synthetic opioid “may expose people who use methamphetamine and have no tolerance to opioids, which could be a factor in the increase in overdose deaths,” the JAMA paper noted.

“Contingency management,” a socially-driven response used by the Department of Veterans Affairs since 2011 and recently gaining favor in California, uses cash payments and gift cards as incentives to keep clean. But despite empirical validation, the programs are rarely offered in the US — a side effect of the country’s moral and criminal approach to drug addiction, which has also hampered research into addiction and overdose treatments.

Methamphetamine use disorder lags behind opioids and alcohol in a crucial measure: the availability of pharmacological interventions.

Monoclonal antibodies vs meth: While we generally think of antibodies as attacking invaders like viruses and bacteria, the pugnacious proteins can hamstring different targets when crafted to. The meth monoclonal antibodies were developed at the University of Arkansas for Medical Sciences (UAMS), and NIDA-supported Phase 2 clinical trials began in 2021, UAMS announced.

The monoclonal antibody UAMS researchers created, dubbed IXT-m200, binds to the meth molecules and keeps them from reaching the brain, reducing the pleasurable effects that drive continued use, Brooks Gentry, a UAMS professor of anesthesiology and toxicology who is coordinating the trials, told Facher.

“We think it will reduce some of the negative overdose effects, too. It’s not quite a sponge, but it functions kind of like one in the bloodstream,” Gentry, who is also the chief medical officer at  InterveXion, said.

Robey has seen the antibody therapy work, although, he noted, it’s been administered mostly to people experiencing milder meth toxicity, as opposed to the throes of an overdose. The therapy is also, at best, years away from full approval and rollout, Gentry told Facher. Robey has seen positive results, however.

“I’ve seen it in 30 minutes: We give the drug, and they’re either clear-headed or they just go to sleep,” Robey told Facher. “They’re finally free of the agitation and anxiety that methamphetamine causes.”

The antibodies have the benefit of remaining in the body’s system for weeks, potentially blunting the drug’s addictive qualities even after administration.

“We envision a clinical scenario where we would give the antibody once a month in an outpatient setting,” Gentry told NIDA. If a person relapses, the antibody will slow the drug’s journey to the brain, hopefully reducing the pleasurable reward for relapsing.

“We think the antibody will change the drug’s effects so that patients will be more likely to return to rehab, shortening the process of giving up the drug,” Gentry said.

Drugs vs. meth: A combination of two already-approved drugs, naltrexone and bupropion, have also shown potential as a meth addiction treatment.

Both drugs cut their teeth treating other addictions. Naltrexone got the nod from the FDA for treating opioid and alcohol abuse disorders, while bupropion, an antidepressant, is also prescribed as a smoking cessation aid.

When administered together — the naltrexone injected and the bupropion ingested, both in extended-release formulations — the improvement  was small but significantly better than the placebo group’s, according to a 2021 paper in the New England Journal of Medicine.

Across a two-stage, multisite placebo-controlled study, 628 patients — with 403 of them in stage one — were administered the drug combo or a placebo.

In stage one, 16.5% of the treatment group had a response, defined as at least three negative urine tests out of the four taken during the six- month study period. By comparison, 3.4% of the placebo group hit the three negative test mark.

In stage two, 11.4% in the treatment group showed a response, as opposed to 1.8% in the placebo group.

“It’s unbelievably exciting that we have the first-ever positive treatment results for this addiction,” study author and UT Southwestern professor Madhukar Trivedi said. “The medical field has not been able to find a treatment for people suffering from meth use disorder.”

The study seems to bolster earlier work, published in Neuropsychopharmacology, which found naltrexone to be a potential meth treatment candidate. UCLA researchers found that naltrexone reduced patient’s cravings for meth, although not in a clinical trial.

Next steps: While neither treatment is approved, the fact that therapies are being seriously developed at all is an important step for the field.

“Before, we had nothing,” Robey, talking about the antibodies, told Facher, “and now we might just be able to get people back to the lives they want to live.” 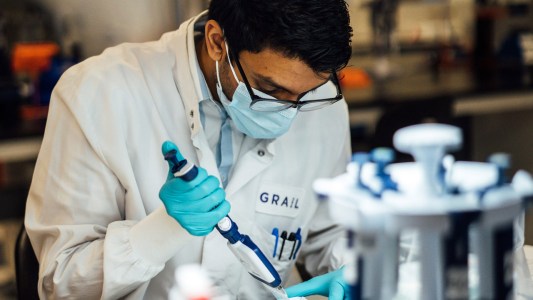