A pair of researchers at UC San Diego have developed tiny “microbots” capable of taking out pneumonia-causing bacteria in the lungs.

The cinematic-sounding pneumonia treatment — robots versus bacteria! — was successful at completely clearing out an otherwise lethal case of bacterial pneumonia in mice.

By delivering the antibiotic-armed microbots right to the heart of the action, in the lungs, the researchers aimed to develop a better, more targeted pneumonia treatment, right where it is needed.

“With an IV injection, sometimes only a very small fraction of antibiotics will get into the lungs. That’s why many current antibiotic treatments for pneumonia don’t work as well as needed, leading to very high mortality rates in the sickest patients,” UC San Diego School of Medicine and study co-author Victor Nizet said.

“Based on these mouse data, we see that the microrobots could potentially improve antibiotic penetration to kill bacterial pathogens and save more patients’ lives.”

A breath of trouble: “Pneumonia” is an umbrella term for acute lung infections that can be caused by any number of nasties, including bacteria, viruses, fungi, or even chemicals.

Although any can get it, pneumonia is — as with most diseases — most dangerous to those over 65 and under 5, being one of the leading infectious disease causes of death for young children.

UCSD’s pneumonia treatment was tested against a bacteria called Pseudomonas aeruginosa. This rod-shaped bacteria is the common culprit behind pneumonia in hospital patients who need to be mechanically ventilated.

The microbots: UCSD nanoengineering professors Joseph Wang and Liangfang Zhang are no strangers to medical micro- and nanobots, having previously developed tiny robots for carrying drugs to the stomach and the blood.

The benefits to having tiny robots carry drugs are twofold: they can make sure the drugs hit their target, and, by having the ability to move, better distribute the drug once it gets there, increasing its killing power.

Researchers at UC San Diego have developed tiny “microbots” capable of taking out pneumonia-causing bacteria in the lungs.

For their robotic pneumonia treatment, published in Nature Materials, the researchers turned to nature to inspire their work: The microbots are made of algae, sprinkled with specially designed nanoparticles filled with antibiotics.

The algae cells allow the microbots to move around, but the nanoparticles do more than just carry the drug. They are covered in the membranes of a special immune system cell, called a neutrophil, allowing them to suck up and neutralize molecules that cause inflammation.

Microbots vs pneumonia: To test their pneumonia treatment, the team turned to that medical workouse, the mouse.

After challenging the mice with bacterial pneumonia, the microbots were administered via a tube down their windpipe. Once inside, they got to work, clearing the infection fully within the week.

All of the mice who received the microbot pneumonia treatment survived past 30 days; all mice who did not died within three days.

The microbots were also able to clear the infection with a much smaller effective dose of antibiotics than an IV into the blood, which required a dose that was 3,000 times larger, the authors said. By delivering the drug right to the infection and spreading it around amongst the invaders, the microbots were able to treat the disease more efficiently.

“These results show how targeted drug delivery combined with active movement from the microalgae improves therapeutic efficacy,” Wang said in a statement.

What’s next: The results, while promising, are still a proof of concept; we’re a long way yet from your pneumonia treatment being a bunch of bitty algae-bots.

Validating their results and, crucially, understanding how the immune system responds to the microbots themselves will be the teams’ next steps as they push towards testing in other animals and, eventually, humans. 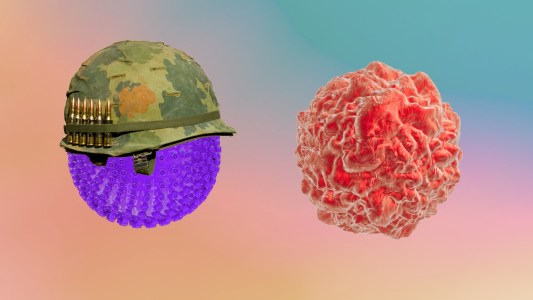 In a small phase 1 trial of a herpes-based cancer therapy, one patient had their tumors completely eliminated.