A double-blind, placebo-controlled — but small — new study has found evidence that microdosing LSD may help to manage pain.

The study, led by researchers from the Netherlands’ Maastricht University and the University of Basel in Switzerland, was published in The Journal of Psychopharmacology (a Dope Science favorite, you psychonauts know).

A report in JAMA from 1964 lays out Kast’s early findings at Chicago’s Cook County Hospital, where he was an attending anesthesiologist. Kast administered LSD to 300 patients, most in the throes of pre-terminal cancer, at the time of the JAMA article.

“Results are both encouraging and puzzling,” the article stated. “Encouraging — because LSD relieves pain much longer than other drugs; puzzling — because many of the patients declined a second administration.”

The patients had less intense visuals than is usual with LSD trips, Kast told JAMA; he theorized it was because their condition pre-occupied them. Fascinatingly, many patients said they still had pain — but it just didn’t matter.

The Maastricht work is different in that it tests microdosing LSD for pain. Microdosing LSD involves taking minute amounts of the drug, too low to induce a trip.

While microdosing psychedelics — especially psilocybin — is a growing trend, notably among the Silicon Valley technorati, rigorous scientific proof on its effects is limited, researchers have previously told Freethink.

On four separate days, the 24 participants received either a placebo or varying doses of LSD — 5, 10, and 20 micrograms — each day. An hour and a half after microdosing LSD (or a placebo), the subjects had their pain tolerance tested using a Cold Pressor Test, and they were tested again 5 hours after administration.

In a Cold Pressor Test, subjects immerse their hands into extremely cold water — a few degrees above freezing, in this case. The closer you get to being Captain America‘d, the more pain tolerance you have. The researchers also asked for self-reported measures of dissociation and other psychological factors, and vital signs were also tabbed.

The researchers found that, when participants received the 20 microgram dose, the drug appeared to “significantly increase the time that participants were able to tolerate exposure to cold (3°C) water and decreased their subjective levels of experienced pain and unpleasantness,” compared to how they did on the other doses and placebo.

The effect persisted for at least five hours after microdosing LSD, too.

So low doses apparently worked as an analgesic, in this study — but why?

Kast’s theory, according to New Atlas, was that the drug trip distracted people from the pain — but microdosing LSD means there’s no trip. The modern day researchers offered a couple theories, including LSD hitting brain receptors that mitigate pain, or triggering something called hypertension-associated hypoalgesia, wherein high blood pressure can lessen pain.

Still, data from just 24 patients is a pretty thin reed on which to rest any theory. As with any and everything you read on Dope Science, the key will be more research, and bigger and better studies.

Drugs
The DMT ‘elves’ people meet while tripping
Why do so many people encounter these ‘elves’ after smoking large doses of DMT? 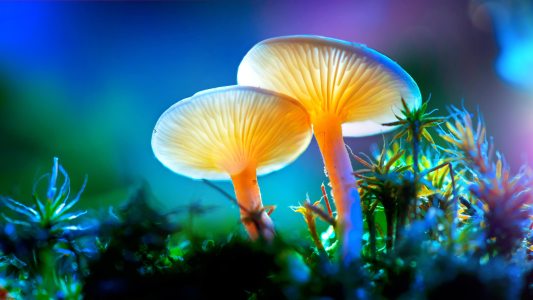 Scientists are looking for people planning to trip on psychedelic mushrooms for a new study focused on people’s “real-world” experiences with psilocybin.