A former NASA scientist has teamed up with an industrial design company to develop a pair of glasses intended to prevent myopia — also known as nearsightedness — by temporarily emitting a precise wavelength of light right into a person’s eyes.

Whether the myopia glasses will work is unclear, but if they do, they could help preempt an expected increase in vision problems over the next few decades.

The challenge: People with myopia have trouble seeing objects that are far away. This is generally because their eyeballs are misshapen, which prevents light from focusing on the retina the way it should.

Myopia typically starts developing in childhood, and while there is a genetic component to the condition, environment plays a role, too — the more time you spend doing “near work” (activities where you looking at something, such as a screen, from a short distance), the greater your risk of developing it.

Conversely, spending time outside in the sun can lower your risk of developing myopia.

“[The bright light] creates a release of dopamine from the retina, and that dopamine slows down the growth of the eye, keeps the eye smaller and prevents or lowers the risk of becoming myopic,” Donald Mutti, an optometry researcher at the Ohio State University, said in 2017.

Why it matters: Myopia is already prevalent, affecting an estimated one-third of the population, and several studies predict it’ll be even more common in the future. While contacts or glasses can correct vision problems, myopia increases a person’s risk of harder-to-treat conditions, too.

“Our technology is purely passive — you don’t have to charge the thing.”

The myopia glasses: The solution to the issue seems simple — get kids to spend more time away from screens and outside! — but that’s not always possible. Some children might have after-school activities that keep them busy until dark, for example.

Now, Betterlab, a company founded by industrial designer Todd Bracher, has teamed up with a former NASA scientist to develop a pair of glasses that replicate the myopia-preventing benefits of sunlight.

(Bracher told Freethink his company’s scientific partner is currently under NDA, but Betterlab will reveal their identity in the next few months.)

Betterlab’s myopia glasses don’t have lenses — they’re just frames that contain a photoluminescent pigment. Exposing them to sunlight or strong lamp light for just one minute causes this pigment to emit light in the wavelength that helps our eyes develop for 25 minutes.

“Our technology is purely passive — you don’t have to charge the thing,” Bracher told Fast Company. “It’s basically glow-in-the-dark.”

The bottom line: Betterlab believes that wearing the glasses for two sessions daily would be sufficient to prevent myopia, but it hasn’t conducted any studies to back up that claim, nor have the glasses undergone any third-party testing.

Betterlab’s design is patent-pending, and depending on funding, it may try to sell the myopia glasses itself or license the technology to others.

It’s not clear how much the glasses might cost, but if they do make it to market — and Betterlab’s claims prove true — kids could don the specs for less than an hour a day to potentially preserve their vision for a lifetime. 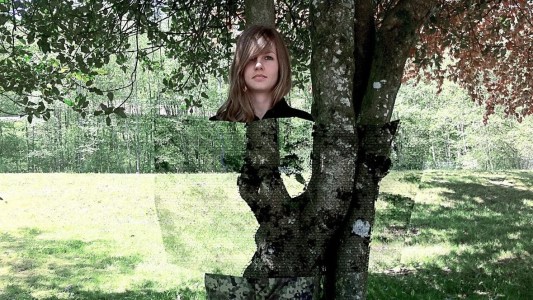 Inventions
Invisibility cloaks are not just possible, but are becoming reality
Subscribe to Freethink for more great stories
Subscription Center
Sections
Video
Freethink
Subscribe
We focus on solutions: the smartest people, the biggest ideas, and the most ground breaking technology shaping our future.
Subscribe