French company Fittingbox has just unveiled an app that uses a technology called “diminished reality” — the opposite of augmented reality (AR).

The app is designed to help shoppers pick out new eyeglasses, but the tech’s potential extends far beyond the bridge of your nose.

The challenge: Many eyeglass sellers now let you try on specs virtually — just pick a pair off a website, look into the camera on your phone or computer, and thanks to the magic of augmented reality (AR), you can see what the frames look like on your face.

To use the feature, though, you’ll need to take off any glasses you’re already wearing — ironically, making it harder to see how you look in the digital frames. (Or, if your vision is as bad as mine, to even recognize that you’re staring at your own face).

The idea: Fittingbox has now unveiled Frame Removal, an app that uses diminished reality to allow people to virtually try on glasses without taking off the pair they’re already wearing.

That’s because, unlike AR, which simply adds a layer of digital information to the real world (like a pair of glasses on your face), diminished reality removes something real.

You can then virtually try on glasses you’re thinking about buying without the old ones affecting the view (and without having to squint at your phone or computer screen).

Diminished reality is a bit trickier than AR — the software needs to be able to predict what the area behind an object might look like in order to effectively remove it — but as the tech evolves, we could see many applications that extend far beyond Frame Removal.

The big picture: There’s already lots of apps that use AR to let you see what a piece of furniture might look like in your home before you buy it — add in a diminished reality component, and you won’t have to imagine your existing furniture disappearing while shopping for the new.

The same could apply to apps that let you try on new clothes or hairstyles, and past research even suggests that diminished reality might be useful for people with autism, helping them filter out distractions to improve focus.

“As smart glasses proliferate and AR becomes commonplace over the next decade, [diminished reality] presents an opportunity to virtually shape our reality rather than simply build on top of it,” the Future Today Institute wrote in its 2021 Tech Trends report. 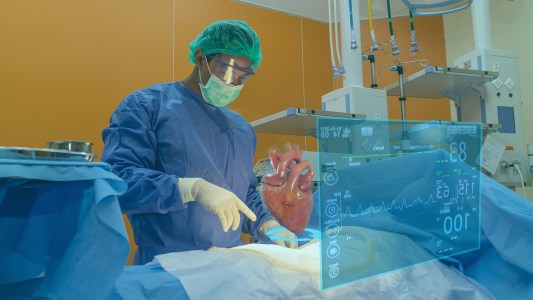 Putting aside interactive filters and fantasy games, augmented reality has the potential to be a vital tool for future innovation.

AR
The future of AR isn’t in gaming. Here are 5 industries to watch.
Subscribe to Freethink for more great stories
Subscription Center
Challenges
Video
Freethink
Subscribe
We focus on solutions: the smartest people, the biggest ideas, and the most ground breaking technology shaping our future.
Subscribe