The way we think about autism has changed dramatically in the last 50 years, but there’s still an ongoing debate about whether to treat it like a medical disorder or a normal variance on the spectrum of human diversity. This debate has divided the autism community itself. “Unfortunately, there’s a lot of friction between parents and researchers and autistic people.” says Steve Silberman, the author of NeuroTribes: The Legacy of Autism and the Future of Neurodiversity.  But Silberman points out that this disagreement can be exciting: historically, the research has been designed by neurotypicals and now autistic people are on the forefront of these discussions.

Freethink spoke to Silberman about the history of autism research and why he is so optimistic about where this will take us in the future.

The history of medical research on autism is fascinating. What role did Hans Asperger play in the discovery of autism?

Hans Asperger was a clinician in Vienna, at the University of Vienna Hospital in the 1930s. He had a clinic for kids in need of a last resort – many had been thrown out of schools and some even arrived at the clinic through the juvenile court system. These kids were being rejected and punished by society and the clinic was their last chance.

The clinic was very comfortable and humane. There was art on the walls, they had special furniture built. It wasn’t a place where you’d be dropped off for a screening test. You would live there for months, and the staff would observe everything that you did and you had all these opportunities in which to express yourself. The model of autism that was developed in that clinic was extremely prescient. In fact, it models what we now call the autism spectrum.

According to your research, Asperger wasn’t the only one researching autism at this time. Who was Leo Kanner?

Leo Kanner was a psychiatrist at Johns Hopkins University. It was believed that the two discoveries of autism, which were really just a year apart in terms of publishing in journals, were completely coincidental. It’s thought that Kanner allegedly discovered it in 1943 and Asperger in 1944.

How did Kanner and Asperger’s approach to autism differ?

Kanner was one of the first child psychiatrists in America and he wanted to prove the validity of the field. So he defined autism very narrowly – more narrowly than Asperger had – so that the new diagnosis would become accepted. He saw it as a rare form of childhood psychosis and would eventually go on to say that it was the result of bad parenting – or “refrigerator mothers” who were cold toward their children.

For example, both Asperger and Kanner noticed special abilities in their autistic patients. One of Kanner’s patients could identify 18 symphonies after hearing only a few bars by the time he turned two years old. Asperger and his colleagues would have said that was pretty cool. But no, Leo Kanner theorized that, in fact, the kid couldn’t care less about these composers. All he cared about was trying to impress his parents because they didn’t show him any love.

And this is the main thing that really affects our world now; Kanner insisted for decades that autism was very, very rare. That had huge effects. Kanner ruled out a lot of people that would have gotten a diagnosis by theorizing that it was a problem mostly for white, upper middle class families. So then families of color ended up not being able to get the resources they needed. And many austitic children were written off by society.

But now the tide is changing. What happened?

A woman named Lorna Wing, who was a psychiatrist in England in the 70s, started looking at autism in the general population and began noticing the diverse range of autistic traits. After drawing attention to Asperger’s earlier writings, she pushed for broadening the criteria for autism.

As a result, Asperger’s definition has been the definition of autism in the medical establishment since the early 1990s. This has led to more diagnoses, which is something to be celebrated because now more people can get access to resources and services they need.

Unfortunately this uptick in diagnoses has been mislabeled as an autism epidemic.

As more people are getting diagnosed, there seems to be more thoughtful dialogue centered around how we think and talk about autism. What does the terms neurotypical and neurodiversity mean?

The word neurotypical emerged in the autistic community as satire. It was turning the medical lens around on the diagnosis and saying, “Oh, you’re going to say that our very lives are a collection of symptoms?” This woman named Laura Tisoncik actually made this wonderful website in 2000 called The Institute For The Study of The Neurologically Typical. Alas, there is no cure. That was basically the tone of autism websites at the time. Doom and gloom. So, she turned around and applied it to non-autistic people.

Neurodiversity was invented by a woman Judy Singer. She based it on the word biodiversity, because in a community of living things like ecologists study, having more variety in living things and having different qualities, and different sensitivities make for a more resilient community of living things like in a Amazon rainforest. What if communities of human minds are like that too, and more variety, more diversity, more difference means better, more resilient, more alive?

We’ve obviously come a long way in how we think about autism, but more work needs to be done. What are you most looking forward to in the next 10 years?

There is a revolution underway at the International Society for Autism Research (INSAR), with autistic people coming to the fore and starting to shape, and determine the future direction of research. And that’s huge because there are billions of dollars behind autism research. And historically, much of the earlier research designed by neurotypicals has been based on either myths about autistic people or about things that are not that important to them.

But now, there’s much more input from the community, which is a very positive change because of the autism rights movement.

Speaking of better use of funds, 80 percent of autistic adults are unemployed. What would you say to an employer thinking about hiring someone with autism?

Autistic people can really thrive if they’re in a situation where they feel secure and supported. And the head of the Autism at Work program at the global software conglomerate SAP, Joe Velasco, said to me that hiring autistic people is not about charity, it’s about boosting the bottom line for stockholders. That’s because companies that have different types of minds working together, perform better. 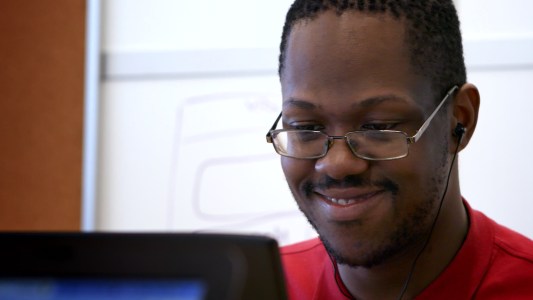 Daivergent is a new startup that hires people with autism to train artificial intelligence – and helps them start independent careers.