One of the biggest challenges to treating cancer is getting drugs to tumors.

Many drugs that look promising in a Petri dish end up failing simply because they can’t get the tumor — or can’t get there without causing a lot of collateral damage.

Now, Chinese researchers have developed a new cancer treatment that may be better at homing in on tumors — thanks to modified blood cells that heat up when exposed to light.

The mice that received the new cancer treatment were all still alive at the end of the study.

Immunotherapy uses a patient’s own immune system as a weapon against cancer — this might involve a vaccine or immunostimulant drugs.

Nanoparticles, designed to heat up when exposed to certain wavelengths of light, are injected into a patient’s body. By focusing light on a tumor, doctors can get the nanoparticles to heat up in that exact location and kill the cancer cells.

For their new cancer treatment, the researchers modified blood platelets to contain both an immunostimulant drug (which calls the body’s immune cells to attack)  and photothermal nanoparticles.

They tried the modified blood cells against nine different mouse models of cancer. When they shone near-infrared light on the animals’ tumors, the platelets near the tumors heated up.

That caused the cells to release the immunostimulant drug, which then triggered an immune response — right on target.

Some of the platelets were also broken into smaller “proplatelets” by the heat. Those blood cell fragments were tiny enough to get deep inside the tumor, bringing the immunostimulant drug with them.

The heat also damaged blood vessels near the tumor — and when blood vessels are damaged, platelets swoop in to repair them by clotting. That meant the therapy itself brought more of the cancer-fighting platelets to the tumor site, where they could be activated by light.

Making the Leap From Mice

The new cancer treatment stopped tumor development almost completely in the mice, and at the end of the 100-day experiment, they were all still alive.

By comparison, the mice that didn’t get both therapies didn’t live past the 50-day mark.

If the results translate from mice to humans (always a big if), cancer patients might one day have their own hot blood used as a weapon against their disease. 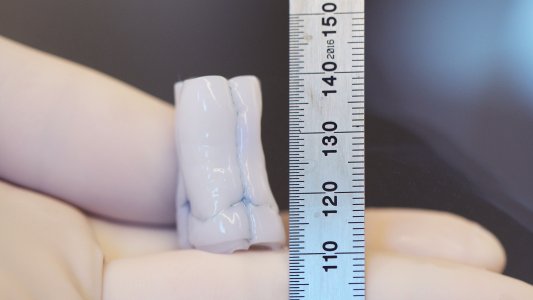 Children may have heart valve replacement surgery 5 or more times. A lab-grown, growing valve may change that in the future.

Surgery
Scientists have created a heart valve implant that grows
By B. David Zarley
Subscribe to Freethink for more great stories
Subscription Center
Sections
Video
Freethink
Subscribe
We focus on solutions: the smartest people, the biggest ideas, and the most ground breaking technology shaping our future.
Subscribe