In an effort to ensure America’s one true religion and cultural colossus, the National Football League, can play this fall, the league and Oakley debuted their newest measure against COVID-19: the NFL’s mouth shield.

Oakley (the official sunglasses for adult men who wear white ball caps backwards) is already a familiar site on the gridiron: the company manufactures many of the visors already worn on helmets to protect player’s eyes. The NFL mouth shield is basically an extension of the same idea, covering their mouth and face.

The league and Players Association agreed to protocols for the upcoming season last week, the AP reports. Details about facilities, travel, media access, and how players who tested positive would be treated were all covered. (Missing? Testing and screening practices.)

One suggestion was to have the players wear cloth face masks, an idea the players promptly sacked. Sent back to the drawing board, the NFL mouth shield was designed instead, to somewhat better reception.

The clear shields feature a variety of openings intended to allow sound — according to Mayer, quarterbacks testing the mouth shield could call plays effectively now, after previously complaining of muffled sound — and air to pass, but not respiratory droplets. While they may keep hands off faces as well, it’s their droplet-blocking ability — tested by Oakley with spraying fluid — that the NFL sees as key to curbing COVID-19.

Football is, by nature, impossible to keep socially distant; the tectonic collisions that define every play and the massive roster sizes (55 players, plus coaches, staff, and practice squads), in close quarters, increase the risk as well. But NFL football is a lucre-lunching behemoth, with revenues of $15 billion in 2019 — plenty of reason to attempt to do everything possible to ensure games are played.

Not every player is down with the NFL mouth shield; no less a presence than Houston Texans’ defensive end J.J. Watt has already come out against wearing them. He did not like wearing a visor; wearing a full shield seems untenable.

“I was like, ‘It looks so cool, I wanna put a visor on,’” Watt told ProFootballTalk. “I had it on for about three periods of practice and I said, ‘Take this sucker off I’m gonna die out here.’ . . . So now you’re gonna put something around my mouth? You can keep that. If that comes into play, I don’t think you’re gonna see me on the field.”

Per ESPN, the shields have already been sent to the Los Angeles Rams and Chargers, who are based near Oakley headquarters. As the potential season inches ever closer, how the NFL’s mouth shield feels on the field — and whether case counts can stay low — will determine if we see some new gear on the gridiron … or anything at all.

Coronavirus
Researchers may have created a universal coronavirus vaccine
All currently licensed COVID-19 vaccines target the spike protein’s S1 region, which is prone to mutations. We need a universal vaccine.
Up Next 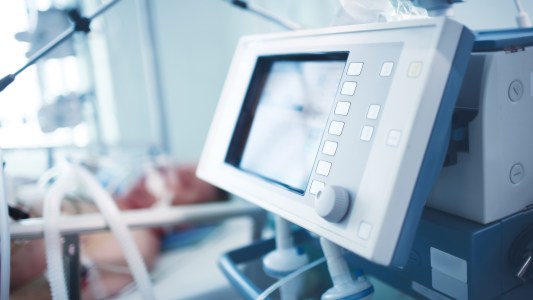 COVID-19 mortality rates are dropping in the U.S. and other nations — a few theories explain why more people are surviving the coronavirus.