The scientists blended in with the Michigan snow — white jumpsuits, white hoods, white face masks, periwinkle surgical gloves — as they set up their device outside of the Barton family pig farm.

The team’s device is designed to kill airborne viruses on the wing, funneling them through a field of nonthermal plasma that inactivates the majority of them, leaving them unable to infect their target cells. And while they were not able to generate enough viruses in the air to test their device at Barton, the lab results looked promising.

“The most difficult disease transmission route to guard against is airborne, because we have relatively little to protect us when we breathe,” Herek Clack, a research associate professor of civil and environmental engineering at the University of Michigan, tells Michigan News. That’s one of the many difficulties in stopping the spread of SARS-CoV-2, the virus that causes COVID-19.

Methods like ultraviolet irradiation and filters have their drawbacks. In the lab, the nonthermal plasma generator killed airborne pathogens more quickly and thoroughly than UV light. Most medical masks work via filtration alone, requiring constant replacements or disinfection.

Nonthermal plasma is made of the charged atomic and subatomic particles that form when a neutral molecule is broken apart — it surrounds electrical discharges like sparks. The unstable particles that result, called radicals, seem to damage the virus’s outer shell, Clack told Freethink.

This includes the parts that the virus uses to latch on to a cell (such as SARS-CoV-2’s infamous “spike protein”). Michigan’s nonthermal plasma reactor inactivated and filtered out at least 99.9% of airborne viruses, the most that they are capable of measuring.

The device is packed with a bed of borosilicate glass beads. In the void between the beads, sparks are created. As the virus-filled air currents are forced through the bed, the viruses are bombarded or filtered from the air.

“By passing through the packed bed, pathogens in the air stream are oxidized by unstable atoms called radicals,” Clack told Michigan News. “What’s left is a virus that has diminished ability to infect cells.”

In the short term, the cold plasma reactor seems best suited to livestock viruses. The realities of modern agriculture, which require keeping plenty of pigs and fowl in close quarters, make the animals extremely susceptible to airborne viruses.

This can have immense impacts, both on the animals themselves — by killing them or forcing a culling — and for human beings: these are the witch’s cauldrons in which viruses like influenza percolate, mutate, and potentially become pandemic threats.

“How can we miniaturize what we do at a barn scale, or at a building scale, down to the point where we get to a device that you can wear?” Clacks says in a university video.

“In that way, we would be able to replace conventional facemasks.” 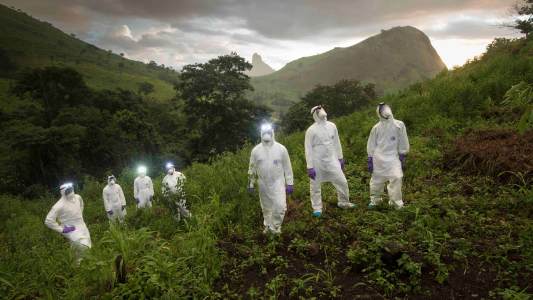 Virology
Hunting zoonotic diseases before an outbreak
By B. David Zarley
Subscribe to Freethink for more great stories
Subscription Center
Sections
Video
Freethink
Subscribe
We focus on solutions: the smartest people, the biggest ideas, and the most ground breaking technology shaping our future.
Subscribe