German psychologist Bertolt Meyer was born without his lower left arm, but since 2009, he’s worn an incredibly advanced mind-controlled prosthesis called an iLimb in its place.

Unfortunately, even that cutting-edge device can’t provide Meyer with as much hand dexterity as he wants for creating electronic music, one of his passions.

So, Meyer now occasionally swaps out his bionic hand for a homemade synthesizer controller that he can manipulate using just his thoughts.

Meyer calls his creation the SynLimb, and to understand how it works, you first need to know a bit more about advanced prostheses like the iLimb.

Meyer is able to make adjustments to his synth just by thinking about them.

While controlling anything with your mind might sound like science fiction, myoelectric prostheses aren’t magical — they’re simply a remarkable application of what scientists have been able to figure out about human biology.

If a person with a functioning upper limb wants to move their hand, their brain sends an electrical signal carrying that directive down the muscles in their arm, and their hand moves.

A person missing their lower arm, like Meyer, can still produce that electrical signal. Myoelectric prostheses are designed to receive those signals and convert them into an action that the prosthetic limb can then carry out.

In other words, Meyer can think about picking up a coffee cup the same way someone with a biological hand might, and his iLimb will respond by picking up the cup.

The problem is speed: the iLimb isn’t yet capable of turning the tiny knobs on Meyer’s modular synthesizer as precisely and quickly as he needs it to.

So, with the help of his husband, Daniel Theiler, and Berlin’s KOMA Elektronik, he created the SynLimb, a device that converts the electric signals produced by his brain into commands his modular synthesizer can interpret.

All Meyer has to do is attach the device to his bionic arm in place of his prosthetic hand and connect it to his synthesizer.

“For me, it’s such a natural thing to do. I don’t really have to think about it. I just do it,” Meyer explained in a YouTube video. “It’s zero effort because I’m so used to producing this muscle signal. For me, this feels like I’m controlling the (synthesizer) filter with my thoughts.”

Meyer’s SynLimb is still very much in the prototype stage — it doesn’t even have an enclosure, meaning he basically looks like he’s wearing the inside of a computer on the end of his arm when using the device.

But as Meyer notes in the video, this is just the first step, and he plans to continue developing his SynLimb, pushing the boundaries of what’s possible when he puts his mind to it.

Medicine
Engineered bacteria may one day prevent kidney stones
In a small proof-of-concept study, an engineered E. coli was able to reduce levels of a kidney stone-causing chemical.

Food
Harvard and Kraft Heinz are trying to make sugar healthier
Instead of replacing sugar, Wyss scientists had an idea: what if they change sugar to make it healthier? 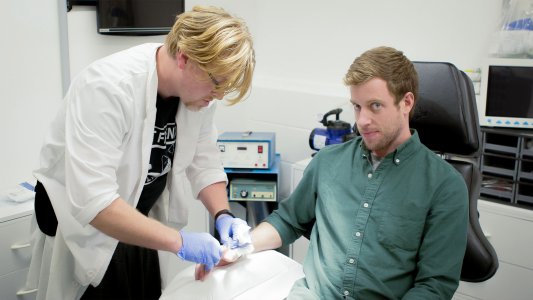 Hacker surgeons like Jeffrey Tibbetts implant everything from compasses to wireless routers. Freethink’s own Chase Pipkin decided to try it out.

Series | Biohackers
I got a chip implanted in a biohacking garage7:05
Subscribe to Freethink for more great stories
Subscription Center
Sections
Video
Freethink
Subscribe
We focus on solutions: the smartest people, the biggest ideas, and the most ground breaking technology shaping our future.
Subscribe