More than 300 million people worldwide live with depression, but if you asked any two of them to describe their experience with it, you’d get two different answers, which makes depression incredibly hard to treat.

Therapy alone can help some people, but others require medication, and while there are dozens of approved antidepressants on the market, a drug that helps one person might not do anything for another — and it might even make their symptoms worse.

Now, a new study suggests that a single type of treatment might be able to help as many as half of all people with major depression disorder.

It’s called psilocybin therapy, and it’s a combination of traditional therapy and sessions where patients trip on psilocybin, the psychedelic compound in magic mushrooms.

The study, published in the journal JAMA Psychiatry, comes out of the Johns Hopkins Center for Psychedelic Research, which is a leading investigator into whether psychedelic drugs can have therapeutic uses.

Johns Hopkins researchers had previously reported that psilocybin therapy decreased depression symptoms in people with life-threatening cancer, and for the new study, they aimed to find out whether it could help the general population, too.

They enrolled 24 participants in the study. Each had a documented history of depression and none were taking antidepressants (if they had been on them at the time of enrollment, they had to taper off before starting the psilocybin therapy).

We really encourage them to go inward.

The participants underwent two five-hour sessions, during which they received a dose of psilocybin and basically chilled out under the researchers’ supervision.

“They have a blindfold on, they have headphones on, listening to music,” researcher Alan Davis told NPR. “And we really encourage them to go inward and to kind of experience whatever is going to come up with the psilocybin.”

These sessions happened two weeks apart from one another. The participants also received about 11 hours each of supportive psychotherapy without any drugs.

Each participant completed a standard depression assessment survey when they enrolled in the study and then twice more, one and four weeks later, after completing the psilocybin therapy.

“The magnitude of the effect we saw was about four times larger than what clinical trials have shown for traditional antidepressants on the market,” Davis said in a news release.

This could be a game changer if these findings hold up in future trials.

Though the results were promising, the study did have several limitations.

The sample size was small and did not include a control arm — all of the participants received the psilocybin therapy. Additionally, the researchers only followed up with the participants for four weeks, and the impact of the therapy could wane with time.

However, they do plan to continue to follow up with the participants for at least a year and share those results in the future. For now, they believe their study shows that psilocybin therapy warrants additional research as a depression treatment.

“Because most other depression treatments take weeks or months to work and may have undesirable effects, this could be a game changer if these findings hold up in future ‘gold-standard’ placebo-controlled clinical trials,” Davis said. 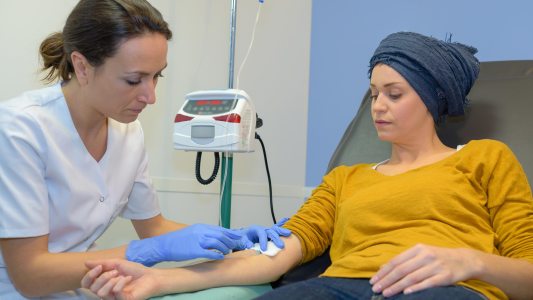 Drug-resistant cancers reduce the effectiveness of chemo. A team of researchers may have found a potential way to treat them.

Medicine
New nano drug may be able to break drug-resistant cancers — with fewer side effects
Subscribe to Freethink for more great stories
Subscription Center
Sections
Video
Freethink
Subscribe
We focus on solutions: the smartest people, the biggest ideas, and the most ground breaking technology shaping our future.
Subscribe