It’s a heart-wrenching statistic the city intends to battle with that staple of school and hotel hallways: vending machines.

The city’s health department, where McRae works, has announced plans for a pilot trial installing 10 public health vending machines in neighborhoods around the city, the NYT’s Isabella Grullón Paz reported.

Instead of Takis and Twix, the machines will be stocked with the overdose-reversing drug naloxone — also known by its brand name, Narcan — and sterile needles, as well as toiletries and safe-sex kits.

“This is really about expanding access to health and wellness services,” McRae said.

The public health vending machines are an example of the harm reduction method of battling addiction and drug use, a stark turn from America’s punitive drug war.

Instead of Takis and Twix, the machines will be stocked with the overdose-reversing drug naloxone and sterile needles, as well as toiletries and safe-sex kits

Preliminary data released by the CDC in November of last year estimated that over 100,000 Americans lost their lives to an overdose in the 12 months since COVID rattled the country in March 2020.

That death toll is the highest ever recorded.

This brutal flare has reignited harm reduction approaches to drug use. Proponents of harm reduction don’t aim for abstinence or deterrence. Instead, harm reduction argues that making that drug use as safe as possible and providing access to treatment for addicts, not jail time, may be the best approach.

Rhode Island is set to open their own state-run site, and in Los Angeles County, naloxone is being offered to people on their release from jail, Axios reported.

Public health vending machines take a similar approach: by providing people the resources they need, where they need them most, we can hopefully reduce overdose deaths and the spread of diseases like hepatitis and HIV.

The proposed public health vending machines will have naloxone in them, a drug which can rapidly reverse opioid overdoses and save lives, as well as safe, sterile needles for people who perhaps are uncomfortable with human interaction at a pharmacy — or who need them at night, when most pharmacies are closed.

Public health vending machines are “about making the material, the health equipment and the health supplies accessible to the people who need it the most, where they’re already at, on their schedule and on their timeline, and without the stigma or shame,” the Drug Policy Alliance’s Sheila P. Vakharia told Paz.

Naloxone vending machines have already been rolled out in Michigan, Indiana, and Kentucky, according to Axios.

Public health vending machines appear cost-effective and practical; whether they can help stem the tide of overdose deaths and curb infectious diseases will depend on projects like New York City’s continuing to bring them to more people. 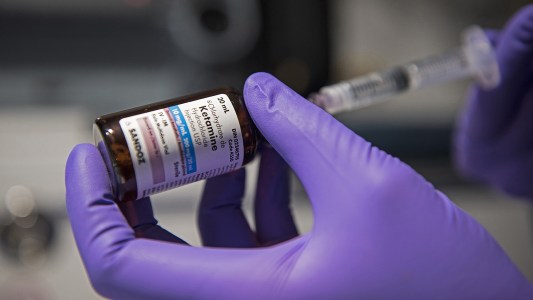 A new study has found evidence that ketamine, combined with therapy, can help people with alcohol addiction abstain longer.