A first-of-its-kind clinical trial out of the University of Exeter has examined the potential of ketamine-assisted therapy to reduce alcohol relapse — and it’s promising.

They were also 2.5 times more likely to stay completely abstinent for the whole six months.

“This is extremely encouraging, as we normally see three out of every four people returning to heavy drinking within six months of quitting alcohol, so this result represents a great improvement,” Exeter’s Celia Morgan, lead author of the study, said in a statement.

A special K: Ketamine is more than a club drug or veterinarian’s friend — it is actually an extremely useful and comparatively safe anesthetic, considered essential by the World Health Organization.

It is also, at low doses, a psychedelic — and potent antidepressant.

The drug’s antidepressant effects are dramatic, and have recently come to the mainstream, with the FDA having approved a ketamine-derived nasal spray for severe depression, ketamine infusion clinics opening around the country, and researchers pouring over its chemical structure in a hunt for new antidepressants.

And while the Exeter study is the first clinical trial of using ketamine to help prevent relapse, the idea of using the anesthetic to help treat alcohol addiction is actually decades old.

“There were some early studies back in the ‘80s in St. Petersburg, in Russia, by a psychologist named Evgeny Krupitsky,” Morgan tells me. Krupitsky gave ketamine to people with alcohol addiction in an inpatient unit and, combined with therapy, had “really amazing results.”

That research, combined with Morgan’s 20 years of studying the drug and its emergence in the psychedelic research renaissance, helped to inspire the Exeter team’s work.

Helping people stay dry: For their new study, published in The American Journal of Psychiatry, the researchers enrolled 96 subjects who had severe alcohol use disorder, were currently abstinent, and were not on antidepressants.

Volunteers were randomly placed into four groups, to measure both the impact of ketamine and the therapy they received. Half of the volunteers received three infusions of ketamine or a placebo (saline), and half of each group received either psychological therapy or alcohol education.“It was quite a complex study to run,” Morgan says.

At low doses, ketamine is a psychedelic — and a promising antidepressant.

The study’s primary outcomes were the self-reported number of days people stayed abstinent and the avoidance of relapse, which they defined as one or more days of heavy drinking across six months.

The ketamine groups were administered the drug at a slightly higher dose than is used for depression, since there is evidence that people with alcohol dependency have a tolerance to the drug, Morgan says.

A good trip: The dose was low enough to cause a psychedelic experience, however, and research points to a trip being a key part of psychedelics’ therapeutic potential.

“People were like meeting themselves from the future or going into Alice in Wonderland,” Morgan says. One patient even met God, who offered him two wishes — one of which was to regrow his hair.

But those experiences can feel transformative for patients.

“The sense of oneness that I felt and the sense of moving away from focusing on the worries and the small stuff is helpful in terms of improving my relationship with alcohol,” one patient said in the Exeter statement.

“Because I think I used alcohol as a self-medication and as a blocking and avoiding mechanism. And I think feeling that those issues are less prevalent or at least less important means I feel less motivated to drink.”

Patients that received ketamine had a “significantly greater number of days abstinent from alcohol,” the researchers wrote in their paper, with the group that got ketamine and psychological therapy having the greatest benefit, staying completely sober for 162 out of 180 days, or 86% of the six month study period.

The lowest performing group, which received a placebo and alcohol education, stayed completely sober for a shade under 69% of the study period.

It’s worth noting that these results had wide confidence intervals — meaning the true magnitude of the change was hard to judge — because the study was small.

“I think that this is an exciting study that highlights a novel potential therapeutic action of ketamine for the treatment of addiction, which is somewhat paradoxical, given the significant abuse liability associated with recreational use of ketamine,” Yale’s John Krystal, whose lab pioneered ketamine as an antidepressant, tells me via email.

Because of that abuse potential, there has been some hesitancy in prescribing ketamine for people with addiction disorders, even though its antidepressant effects may be helpful to curbing those addictions.

Before it can be used clinically, “we will need to see this work replicated and extended to fully understand the clinical impact of this intervention,” Yale’s John Krystal says.

From concept to clinic: Interestingly, there was no significant difference in the odds of relapse (one or more days of heavy drinking) for ketamine patients within the six months, despite the detectable increase in abstinence — a reminder that, as exciting as the results may be, this is not a definitive result. The result could be a factor of the study window; a longer follow up period may have yielded more pronounced differences, Morgan says via email.

Before it can be used clinically, “we will need to see this work replicated and extended to fully understand the clinical impact of this intervention,” Krystal says.

Morgan and colleagues’ next step is to do just that. They are in the process of beginning a phase 3 trial with the support of the NHS, enrolling a larger patient cohort — including those on antidepressants.

They hope to begin the trial within the year.

Neuroscience
Are near-death experiences just psychedelic trips?
One possible explanation of near death experiences is that our brains are flooded with a hallucinogenic, DMT.
By Ross Pomeroy
Up Next 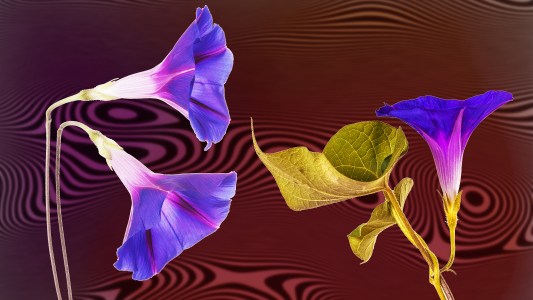 Researchers have found that the symbiotic relationship between a fungus and a morning glory holds the potential for new psychedelic compounds and medicines.

Drugs
Morning glories may be a source of new psychedelics and medicines
By B. David Zarley
Subscribe to Freethink for more great stories
Subscription Center
Sections
Video
Freethink
Subscribe
We focus on solutions: the smartest people, the biggest ideas, and the most ground breaking technology shaping our future.
Subscribe