With their beautiful blue trumpet bells unfurling to greet the sun, the morning glory adds a splash of color to the start of your day.

Its seeds, however, may do a bit more than that — new research has found that, thanks to a symbiotic relationship with a fungus, this common flower may be a source for new psychedelic drugs.

The flower-fungus relationship can lead to the creation of compounds called ergot alkaloids. Ergot alkaloids have been used to treat Parkinson’s disease and brutally painful migraine and cluster headaches for decades. But they’re also closely related to LSD.

Examining the seeds of morning glories taken from collections around the globe, researchers from Tulane, Indiana University, and West Virginia University found that a quarter of the 210 morning glory species they examined had some form of ergot alkaloid in their seeds.

“We have known a lot about the fungal alkaloid chemistry and its effects on the mind and body for [a] long time,” Tulane plant and fungal biologist Keith Clay said.

This new study is the first to show just how intermingled morning glory and egot evolution is — a relationship that is “manifested by different mixtures and concentrations of ergot alkaloids across the morning glory evolutionary tree.”

New research has found that, thanks to a symbiotic relationship with a fungus, the common flower may be a source of new psychedelic compounds called ergot alkaloids.

A symbiotic relationship: A deal that benefits both partners of two different species is known as symbiotic.

In some cases, that symbiotic relationship can be encoded in evolution, the authors explain in their study, published in Communications Biology. Organisms that help another one out may get a leg up in the reproduction game, like wasps who harbor bacteria that produce compounds which help fight off infection in their larvae — larvae that have inherited the microbial symbiote from their mother.

Some plants have a similar relationship with fungi. In certain grasses, the ergot fungus — cause of Saint Anthony’s Fire — creates ergot alkaloids that don’t stay contained in the fungus’s thready, root-like structures, but can actually be passed down in the seeds.

These ergot alkaloids make the plants less fun to eat, and everybody wins.

Some species of morning glory have forged a similar relationship. The ergot alkaloids contained in their seeds “have been of longstanding interest given their toxic effects on humans and animals, medical applications and psychoactive properties,” the researchers wrote.

One ergot alkaloid, lysergic acid, is particularly famous: it’s the inspiration behind LSD, a synthetic derivative.

Finding a trove of new ergot alkaloid compounds means potential for new psychedelics, which in turn may end up being useful as mental health therapies or perhaps anti-inflammatories.

The new compounds may have uses beyond the psychedelic. Currently, ergot alkaloids’ potential to constrict the blood vessels around the head also make them cluster and migraine headache medications, while their ability to goose nerve cells in a way similar to dopamine means they can be used as a treatment for Parkinson’s.

The researchers reported 36 new ergot alkaloid compounds, suggesting to them that even more examples of the symbiosis will be uncovered with continuing research. 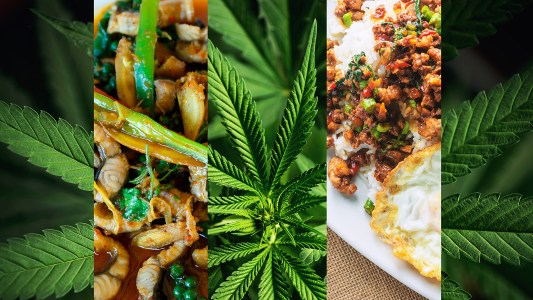 Cannabis cooking has long simmered in Thailand. With the ruling junta’s new drug policies, the traditional dish is now making its way onto restaurant plates.

Drugs
Traditional Thai cannabis cooking is back on the menu
By B. David Zarley
Subscribe to Freethink for more great stories
Subscription Center
Sections
Video
Freethink
Subscribe
We focus on solutions: the smartest people, the biggest ideas, and the most ground breaking technology shaping our future.
Subscribe