Restaurants in Thailand are bringing an old tradition back to the table: cannabis cooking.

Pushed underground by some of the harshest drug laws in the world, cannabis cooking has a long history in the region — and now a second life, as the country’s ruling junta continues to decriminalize the plant.

“When you have something tasty, [cannabis] makes it better,” Chakree Lapboonruang, a Bangkok resident whose father used to cook with cannabis, told The Economist. “It’s just like msg, except it’s natural.”

From crime to cash: The cannabis restaurants popping up may just be the most obvious — and delicious — benefit of loosening the regulations, which the government hopes will spur new economic opportunities in a pandemic-ravaged world.

“When the economy is picking up and we don’t have new products as alternatives, people will keep doing the same things and competing with one another,” Thai minister of public health Anutin Charnvirakul said at a cannabis kick-off event in December 2021, the Bangkok Post reported.

“But if we offer them a choice, they can learn to build on it, creating new products and business models, which will in turn speed up the economic recovery.”

It’s a dramatic about-face for a nation that has some of the strictest drug laws in the world.

Pushed underground by some of the harshest drug laws in the world, cannabis cooking has a long history in the region — and now a second life, as Thailand’s ruling junta decriminalizes the plant.

Thailand has a massive prison population (at least, massive by non-American standards), many of which are low-level drug offenders, and it has waged a war on drugs brutal enough that it garnered the attention of Human Rights Watch.

So when the military government legalized medical cannabis in 2018, it was seen as a potential seachange not only in Thailand, but in Southeast Asia, where the nation’s neighbors, such as Singapore and the Philippines, have similarly draconian drug policies.

And the junta has gone further. First, parts of the plant with low levels of THC — namely the stems, leaves, roots, and sprigs — were taken off the Category 5 narcotics list. Then an even more dramatic step was taken this past December, announcing the decriminalization of the flowers and buds, the part of the plant that, you know, you get stoned with.

“What we have achieved so far is to declare that cannabis stems, roots, leaves and sprigs are not drugs. Starting next year, we’ll remove everything — stems, roots, sprigs, leaves, buds, flowers and seeds — from the narcotics list,” the Post reported Anutin as saying.

It won’t be open season, however; certain restrictions will still apply, much as they do in some U.S. states with legal pot. THC content will be capped, and you’ll need government permission for growing plants, the Post reported.

“If we are going to fully legalize all parts of the cannabis plant for commercial purposes next year, it will still be with a lot of caveats,” entrepreneur and legalization advocate Kitty Chopaka told VICE.

But cannabis cooking, long simmering beneath private pot lids, is already stepping into the culinary spotlight.

Cannabis cooking is back on the menu: Thailand’s cannabis cooking heritage is right there in what is considered to be its oldest cookbook, 1908’s Mae Khrua Hua Pa. The cookbook’s eel-curry recipe, Atlas Obscura’s Austin Bush wrote, calls for “tender ganja leaves.”

The entrepreneurs reincorporating this classic ingredient were well aware of its delicious potential. Bangkok noodle shop owner Sittichan Vuttipornkul, whose Rod Dee Ded has multiple locations around the city, told Bush that his own father had incorporated cannabis into the family’s soups as a boy.

“My dad said that he used to use [cannabis] in the soup when I was a kid, at least 40 years ago.” He points to the plant’s glutamic acid content as perhaps being the key to its gastronomic appeal. “This gives our tongues the ability to taste more flavor in food.”

Glutamic acid provides food with that highly-prized, savory, and full-bodied “umami” flavor — and you’ve definitely eaten it before, in the form of MSG.

At noodle shop Rod Dee Ded, dried cannabis roots and branches — which have found new value after being considered mere waste — are added to beef broth, and dry-roasted leaves, ground to a powder, are in condiments. Ban Lao Reung, a restaurant in Prachinburi that Bush visited, has incorporated cannabis into pork stir-fry and soups.

Want your cannabis cooking to be a bit more obvious? Ban Lao Reung also serves whole leaves, fried tempura-style, and served with a dipping sauce. (I must try this.)

Cannabis-infused restaurants are popping up across Thailand, Bush reported. Old traditions and new drug policy approaches are coming together on a plate.

Drugs
What your weed label really means
Through the largest analysis of commercial cannabis flower yet, Colorado researchers have found that the current labeling system falls short.
Up Next 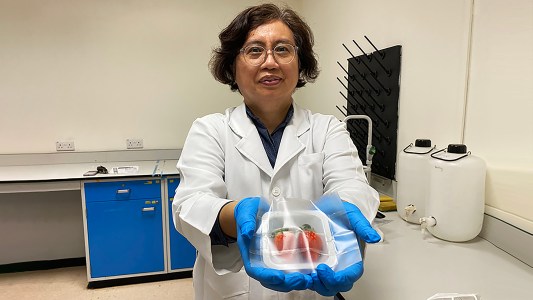