Lost in the long shadow of its DNA-snipping cousin CRISPR for nearly a decade, RNA editing is having a moment — a $91.5 million moment.

That’s the recently closed Series A round for RNA editing startup Korro Bio, the Cambridge-based company inspired by … squid.

Korro co-founder Joshua Rosenthal, a neurobiologist at the Marine Biological Laboratory in Woods Hole, Massachusetts, has dedicated the bulk of his career to studying the nervous systems of squids, Ryan Cross wrote in a thorough 2019 piece for Chemical & Engineering News.

Squids — which are objectively awesome — utilize an enzyme called ADAR (“adenosine deaminase acting on RNA”) to edit their own RNA.

Editing with Pencil, Not Ink

CRISPR still elicits sharp inhales of excitement, the punctuations of giddy progress and promise, and rightfully so; a dazzling array of DNA projects are underway.

CRISPR has its downsides, though, perhaps most frighteningly the potential to cause permanent — and unintended — gene mutations. Basically, CRISPR can be hitting genes in places we don’t want it to, and those changes are permanent, passed down by the cell in every copy of itself.

RNA editing avoids this concern by changing the expression of genes only temporarily.

If DNA is the blueprint for our bodies, RNA is the work orders, converting the master plan in the cell’s nucleus into specific instructions on what proteins to build, and when. While CRISPR is modifying your building plan (for instance, erasing disease-causing genes), RNA editing is just intercepting your cells’ work orders.

Like CRISPR, editing RNA needs “guide RNA” and an enzyme to make changes to a specific target. When cutting DNA with CRISPR, that enzyme is usually Cas9; with RNA editing, it’s ADAR. Guided by a strand of RNA that’s inserted into the body, the ADAR enzyme can change one specific letter of the RNA work orders, which then results in cells cranking out different proteins.

Change the correctly placed letter, get your desired result.

The key safety consideration is that the editing has to be done continuously to still have an effect. When the ADAR-modified RNA gets used up, the body will go back to its master plan (DNA) to create RNA — no permanent changes.

This means RNA editing offers some unique potential: it can be used to treat genetic disorders without the looming fear of forever altering your genes, and could perhaps help treat transient problems, like inflammation and pain.

RNA editing in and of itself isn’t new; per Labiotech, the technique was first laid out in the late 1980s, and it was studied as a possible form of therapy in the 1990s, when it was investigated as a treatment for muscular dystrophy.

(A research paper came out of the whole thing, according to Cross, but was cited once, and then the field evaporated.)

But the approval by regulatory bodies of an RNA interference drug in 2018 — silencing the expression of a gene, without permanently deleting it — reignited interest in the technique.

RNA editing does pose some challenges. ADAR naturally occurs in the human body — we don’t use it as adroitly as the squids do — and thus the ADAR doesn’t need to be delivered into us like Cas9 does; only the special guide RNA, which wrangles the ADAR and takes it where we want it, needs to be put inside. But RNA is a pretty unstable lil molecule, and, if it’s floating around freely, it runs the risk of being set upon by the immune system.

The highly specific nature of ADAR — only changing one letter — also means that RNA editing is working with a more limited tool box than CRISPR, although researchers are working on that. 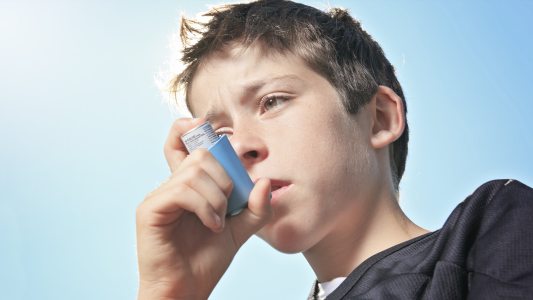 Before prescribing an asthma treatment to children, doctors should use a cheap genetic test to look for a specific altered gene, according to a new study.