Asthma is the most common chronic condition in children — nearly one in 11 kids suffers from the disease, which causes the airways to the lungs to swell, leading to coughing, wheezing, and shortness of breath.

While that prevalence is, obviously, not anything to celebrate, it means researchers have had a lot of experience treating kids with asthma. This has led to the development of a standard asthma treatment that’s able to completely control most children’s symptoms.

But about one in seven kids has a small difference in their DNA that can cause their symptoms to get worse if given the standard treatment — and new research suggests that giving young asthma patients a cheap, simple genetic test before prescribing an asthma treatment can improve their outcomes.

The standard asthma treatment for children is a combination of a steroid inhaler and a medication called salmeterol that opens up the airways.

This drug targets a molecule called the beta-2 receptor, and in some people, the gene that produces this molecule is slightly altered — for them, salmeterol can do more harm than good.

For this new study, researchers from the Royal Alexandra Children’s Hospital set out to see whether testing children for that altered gene prior to prescribing an asthma treatment could improve their quality of life.

The researchers started by randomly assigning 241 asthma patients between the ages of 12 and 18 to one of two groups.

The children in the first group received the standard asthma treatment, but those in the second group underwent a genetic test to see if one or both of their copies of the beta-2 receptor gene were altered. This test used samples collected via a simple cheek swab and cost less than $25 per patient.

If a patient had at least one altered copy of the gene, they received an alternative to salmeterol (montelukast).

Benefits of the Genetic Test

The next step in the study was seeing whether prescribing an asthma treatment based on a young patient’s genetics made a difference in their quality of life.

Researchers followed up with the patients for a year, checking in with them about the severity of their symptoms, how their asthma affected their daily activities, and how it affected their feelings.

Each patient received a score between one and seven to rate their quality of life. The researchers then compared the average scores of the patients in the group that underwent the genetic testing prior to being assigned an asthma treatment with those that didn’t.

Next up: larger trials with children who have less control over their asthma.

For patients with just one copy of the altered gene, the genetic testing didn’t make much of a difference — their average quality of life score was less than .2 points higher than those in the standard care group.

The impact was slightly more pronounced among patients with two altered copies of the gene — their score was more than .4 points higher, which the researchers say translates to a notable improvement in quality of life.

“These results are very promising because they show, for the first time, that it could be beneficial to test for certain genetic differences in children with asthma and select medication according to those differences,” researcher Somnath Mukhopadhyay said in a press release.

The researchers now plan to move on to larger trials with children who have less control over their asthma.

Those are the patients with the most room for improvement, and the results of those trials could help reveal the “true benefit” of testing for the altered gene before prescribing an asthma treatment, Mukhopadhyay explained. 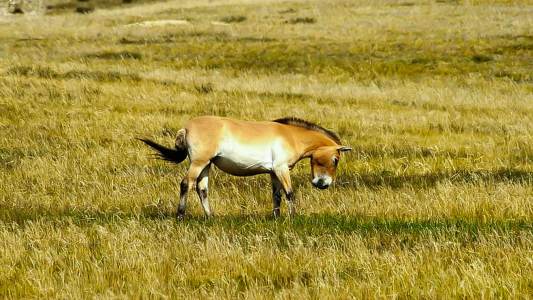 The first cloned Przewalski’s horse could inject the critically endangered species with a much-need dose of genetic diversity.