Half of the genes linked to schizophrenia are involved in running the placenta during pregnancy, according to a new study in Nature Medicine. The discovery is surprising because researchers had assumed that schizophrenia genes would be primarily active in the brain, but, in retrospect, it explains a lot. Complications in pregnancy, such as preeclampsia, are a known risk factor for schizophrenia, but exactly how and why was always unclear. This research fills in a huge gap between the environmental and genetic causes of the disorder, and it is giving scientists hope for identifying vulnerable babies—and possibly discovering early interventions to protect them.

A Dangerous Disease: Schizophrenia is a rare mental disorder characterized by hallucinations, delusions, and trouble thinking clearly, and it often presents with other cognitive and emotional problems, like depression, paranoia, and substance abuse. It’s a tragic, mysterious, and dangerous disease—life expectancy for individuals with schizophrenia is cut by 10-25 years. There are no objective diagnostic markers, and it’s diagnosed solely through abnormal behaviors. Problems during pregnancy play a role, but symptoms (hearing voices, imagining things, and sudden, prolonged loss of focus) don’t usually show up until young adulthood, typically around age 20. Some people recover as they get older, and treatment can help, but for most, the condition is chronic.

Causes Unknown: Schizophrenia is highly heritable, but the specific causes remain vague and elusive. The prevalence is the same in both sexes, but the disorder tends to be more severe and emerge sooner in boys. About 20% of pregnancies have the complications that double a child’s risk—such as fetal growth restrictions, infections, and preeclampsia—but only about 0.7% of children will ever develop the disorder. A landmark 2014 study linked it to over 100 sections of DNA, but each only very slightly raised the risk.

Genes + Stress: A new analysis of schizophrenia genes is finally getting some traction on how all these mechanisms fit together. The key insight is that about half of schizophrenia genes are responsible for directing the placenta, the organ in the womb that attaches the fetus to the mother and provides oxygen, nutrients, and antibodies.

Combining these placental genes with pregnancy trouble, like infection, hypoxia, malnutrition, and other prenatal stresses, increased a person’s risk of schizophrenia by a factor of five, compared to those who only had the genes. The most likely theory is that the placenta modulates how the fetal brain responds to stress and inflammation, and a very particular combination of factors in the womb sets up neurological problems that emerge as the brain finishes developing later in life.

So What Now? Schizophrenia is still enormously complicated—the full list of processes, proteins, and genes that may be involved is mind-boggling—and this discovery does not point to any specific cures or treatments yet. But uncovering a bit more about how schizophrenia is passed on and how the environment triggers its genetic risk factors is a very big deal.

The scientists’ new plan of attack is to grow mini-placentas in a lab, using stem cells from people with schizophrenia, to study how their genes respond to different levels of inflammation, nutrients, and oxygen. Hopefully, this will lead to much more accurate prediction of the risk of schizophrenia and give doctors a clue about what kinds of early interventions might work.

Mental Health
This 20-year chart of depression diagnoses shows an incredible shift
People are being diagnosed with depression earlier than in the past because of a decrease in stigma and better diagnostic guidelines.
Up Next 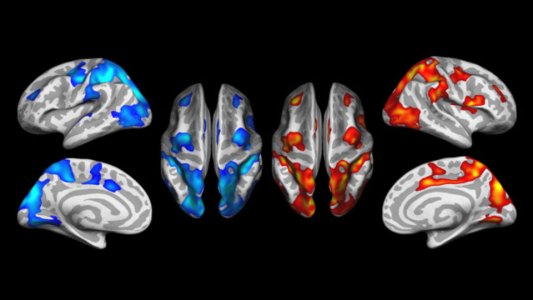 Millions of people are dealing with traumatic head injuries; brain scans show that cognitive training could…