Despite being small enough to fit in your pocket, mini-RCM has already proven its worth — performing better than manual tools during a mock surgery. Someday, mini-RCM could be the only doctor in the room.

The idea behind remote operations is to facilitate minimally invasive surgery using a small incision, camera, and surgical tools. A human surgeon guides a robot’s motions from a distance. Robotic surgery is becoming more common in medicine, such as laparoscopic surgeries because telerobots help surgeons improve precision and control.

This has increased patients’ and doctor’s safety. But there are still limitations. The robots can be difficult to operate, expensive, and huge — taking up most of the room.

A collaboration between engineers Robert Wood of the Wyss Institute and Hiroyuki Suzuki of Sony found a solution: an origami-inspired miniature robot.

The tiny robot, dubbed mini-RCM, is about the size of a tennis ball and weighs as much as a penny. But, in a mock-surgery, the small bot performed better than manual tools.

The team created the mini-bot using a technique that Wood developed to simplify the creation of small things. Inspired by origami and children’s pop-up books, the process involves layering bonded materials and then laser cutting them so that they pop up into the desired shape.

In this case, mini-RCM is a parallelogram shape with three actuators that control movement in multiple directions. They then set the bot on a rail for lateral movements, like a train on its track. Finally, they added optical sensors to sense and correct small movement errors by the human operator, such as hand tremors, that can happen during surgery.

The team put mini-RCM through the paces in two tests designed to mimic robotic surgery conditions. They connected the bot to a Phantom Omni device, where the human user controls a pen that then triggers mini-RCM to respond.

The first test — a microscopic tracing test — tasked the user to trace a square that was smaller than the tip of a ballpoint pen while looking through a microscope. They then compared the results with someone performing the same task by hand, with manual tools. The square traced with mini-RCM had 68% fewer errors.

Then the team created a mock eye surgery — retinal vein cannulation — a demanding surgery where doctors insert a needle through the eye to inject therapeutic drugs into the retinal veins, at the back of the eyeball. They made a fake vein, only twice the width of a human hair. During the practice robotic surgery, while using the mini-RCM, they successfully hit the tube without causing damage.

The origami technique, Wood said in a statement, “is proving to be a valuable approach in a number of areas that require small yet sophisticated machines, and it was very satisfying to know that it has the potential to improve the safety and efficiency of surgeries to make them even less invasive for patients.” 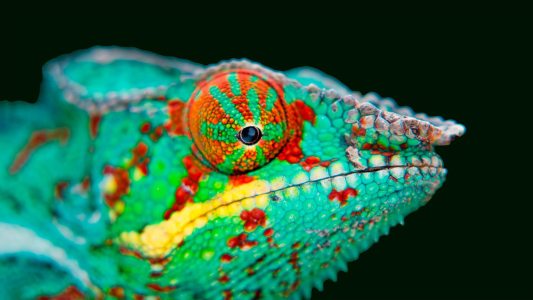 The chameleon lizard has a highly specialized tongue. Now, a team of engineers created a quick-tongued robot.