While most of us scramble to avoid the Delta variant of SARS-CoV-2, researchers in the U.K. are taking a different tack towards the virus: they’re growing it in a lab, to try to infect human volunteers with it.

London-based contract research company hVIVO, along with Dutch colleagues, have gotten the Delta viruses through the first stage of their “life,” the Wall Street Journal’s Jenny Strasburg reported. There’s almost enough of the virus to begin testing it, with half a liter or more coming by the fall, hVIVO virologist and CSO Andrew Catchpole told Strasburg.

Roughly a third of the Delta viruses will be doled out for scientific testing, with the rest earmarked for human challenge trials, where healthy volunteers will be exposed to them to help us better understand the virus — and how well immunity to it is holding up.

As the name implies, volunteers in an HCT are purposefully exposed — “challenged” — by a pathogen in controlled conditions. By doing this, you can rapidly test the immune response, vaccines, and treatments without the need to wait for infections out in the wild.

Roughly a third of the Delta viruses will be doled out for scientific testing, with the rest earmarked for human challenge trials, where healthy volunteers will be exposed to them to help us better understand the virus.

This can potentially cut months or years off the time needed to study, say, the efficacy of that season’s flu vaccine, or how well an anti-malaria drug works.

“They’re particularly useful when you’ve got a lot of potential products you want to test,” Catchpole previously told me.

It was a human challenge trial in 1900 that proved Cuban doctor Carlos Finlay’s theory that mosquitoes are the source of yellow fever. By being purposefully bitten by mosquitoes, the volunteers — under the direction of Major Walter Reed — became living, unequivocal proof of Finlay’s theory.

But one volunteer, Jesse W. Lazear, died. It’s the promise and peril of human challenge trials, in one Army-issued tent.

Normally, HCTs are done with young, healthy volunteers, and against diseases that have known cures — or at least really, really good treatments. This significantly lessens the chance of a volunteer becoming grievously ill or dying.

It’s also why COVID-19 human challenges have proven so controversial.

While proposals have been floated in numerous places, including in the U.S. and Europe, the U.K.’s two challenge trials, at Oxford University and Imperial College London, are currently the only ones with a green light.

The first experiments aimed to determine the minimum amount of virus that can cause an infection, as well as help us understand the risk of reinfection — knowledge which may be crucial to saving lives.

But those trials, which Strasburg reports have infected 40 individuals thus far, use the original strain of SARS-CoV-2.

We’re not too worried about that one at the moment, since it has all but disappeared in most countries.

To perform human challenge trials for vaccines or treatments with a better bearing on our current situation, scientists need some Delta virus. Which, despite its ubiquity — over 25,000 people are being infected with it per day in the U.K. right now — has actually proven challenging.

“Delta has been more difficult,” Catchpole told Strasburg. “Not all clinical samples grow as readily in cell cultures.”

To perform human challenge trials for vaccines or treatments with a better bearing on our current situation, scientists need some Delta virus.

The virus needs to be painstakingly cultured, checked for other mutations and contamination, and purified to make sure that every sample is exactly the same.

Currently, the plan is for the Delta viruses to be moved to London within the next few weeks, where the process will be finished in a secure lab before trials begin near the end of the year. 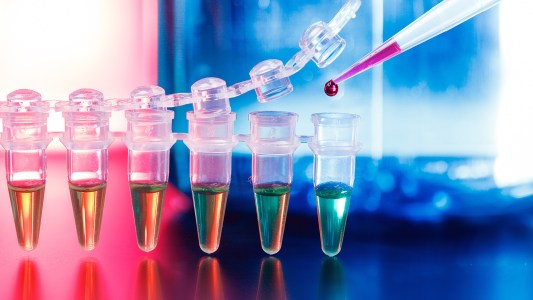 Your circadian clock controls more than when you sleep and wake. Researchers are developing a simple blood test to try and accurately tell your time.

Medicine
A blood test for your circadian clock
Subscribe to Freethink for more great stories
Subscription Center
Challenges
Video
Freethink
Subscribe
We focus on solutions: the smartest people, the biggest ideas, and the most ground breaking technology shaping our future.
Subscribe