For the first time since the summer of 2018, the Democratic Republic of the Congo (DRC) has been declared Ebola free, as an outbreak in the densely-forested northwestern province of Équateur has been successfully snuffed out after a six-month battle.

Key to stopping the epidemic — which had 115 confirmed cases and 55 deaths, per the WHO — was the deployment of the Ebola vaccine to what the Wall Street Journal describes as some of the most isolated jungle villages in the world.

The immensity of the Congo, which stretches from Africa’s Atlantic coast deep into the heart of the continent, fed by the great aorta of its eponymous river, presents a massive challenge to a vaccine’s cold chain.

Many vaccines — including Pfizer and Moderna’s mRNA COVID-19 shots — require sub-freezing temperatures to maintain their potency. Keeping the vaccine’s cold chain intact is crucial to making sure it can arrive where it is needed while working as needed.

Pfizer’s vaccine has to be stored at -94℉, while Moderna requires a seemingly-more-reasonable -4℉ (basically, a normal freezer temp). Pfizer’s shot can only last for 5 days in a refrigerator, while Moderna promises up to 30.

But either way, the clock starts ticking when the temperature rises. This means planning an unbroken chain of cold storage and cold transportation, from pharma factories to human arms.

“I believe it can be done,” Debra Kristensen, who works on vaccine supply chains at public health nonprofit PATH, told NPR.

“Ebola vaccine, for example, was successfully used in a few African countries and also required this ultra-cold chain storage.”

Congo’s successful deployment of the Ebola vaccine is the key for any hope of carrying a COVID-19 vaccine cold chain through the heat and distance that can be found on the continent.

Central to the efforts were ARKTEKs: high-tech freezers capable of keeping the Ebola vaccine (which also needs a Chicago-during-polar-vortex temperature of -76℉) at optimal temperatures for up to a week in the field.

ARKTEK freezers are double-walled, insulated by a near vacuum.

“You’re trying to reduce all the mechanisms of heat transfer between the warm outside and the cold inside,” Mike Friend, principal investigator at ARKTEK designer Intellectual Ventures, told WIRED.

That vacuum helps keep the cold elements protected from the hot air, and the fiberglass material is designed to radiate as little heat as possible. To get to the Mr. Freeze-level temperatures required for the vaccine, ARKTEK uses synthetic alcohol ice (frozen water simply melts, and dry ice is hard to get a hold of).

A chemical called a phase-change material (PCM), based on denatured alcohol, fit the bill.

With their field freezers ready, then came the not-so-simple task of getting them where they need to go.

From City Streets to Rain Forests

The Congo is home to vast natural resources and rich biodiversity, epitomized in the three gorilla species found within its expansive borders.

But it hides an endemic monster, too.

First discovered on the banks of the Ebola River in 1976, in what was then Zaire, the snake-like virus causes a vicious viral hemorrhagic fever — far, far deadlier than SARS-CoV-2. It is a formidable but now familiar foe; the DRC has had more Ebola outbreaks than any other place in the world.

Ebola’s true ferocity was demonstrated in a West African epidemic that scythed through Guinea, Liberia, and Sierra Leone from 2014 to 2016, killing over 11,000 people.

The hope is that the success of the Ebola vaccine’s cold chain holds lessons for when it is time to distribute vaccines for COVID-19.

Compared to that tragedy, the response to the Équateur outbreak was swift and decisive, despite being the first faced during the dual threat of COVID-19. The WHO reports that vaccinators, the vast majority of whom were locals, began distributing the Ebola vaccine within four days of the outbreak being declared.

The hope is that the success of the Ebola vaccine’s cold chain, despite being stretched from city streets to remote and difficult terrain, holds lessons for when it is time to distribute vaccines for COVID-19.

“Overcoming one of the world’s most dangerous pathogens in remote and hard to access communities demonstrates what is possible when science and solidarity come together,” Matshidiso Moeti, the WHO Regional Director for Africa, said in the organization’s announcement.

Smothering a global pandemic will require vastly more vaccines, covering vastly more people, than containing the relatively small outbreak in Équteur. But Moeti is optimistic that the knowledge and techniques for vaccine cold chains established there can be transferred and scaled.

“The technology used to keep the Ebola vaccine at super-cold temperatures will be helpful when bringing a COVID-19 vaccine to Africa. Tackling Ebola in parallel with COVID-19 hasn’t been easy, but much of the expertise we’ve built in one disease is transferable to another and underlines the importance of investing in emergency preparedness and building local capacity.” 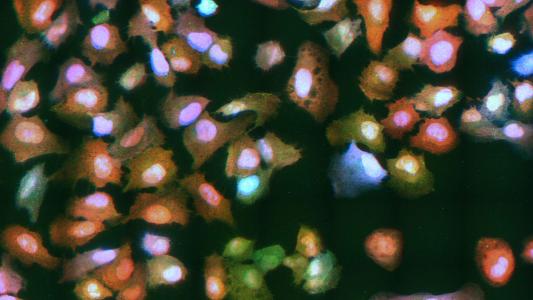 Understanding how a virus infects and replicates in a cell is crucial to stopping them. Now, researchers can see an infection in real-time.

Virology
We can now see a virus invasion in real-time
By B. David Zarley
Subscribe to Freethink for more great stories
Subscription Center
Sections
Video
Freethink
Subscribe
We focus on solutions: the smartest people, the biggest ideas, and the most ground breaking technology shaping our future.
Subscribe