A Canadian startup has built a vaccine robot that can deliver a dose into a patient’s arm without a needle or any human help — is it the future of healthcare?

How it works: The vaccine robot is called Cobi, and it’s the work of Cobionix, a startup founded at the University of Waterloo’s Velocity incubator. It has a square base about the size of a washing machine. A tablet display is fixed to the front, and a robot arm extends from the top.

In a demonstration, cofounder Tim Lasswell uses an app to register with the vaccine robot. He then checks in for his dose via the tablet and proves his identity by holding an ID card in front of its camera.

The robot arm dives into the base to retrieve the vaccine and then uses a lidar sensor to track Lasswell’s position. If he needed to move or remove any clothing, those instructions would appear on the display.

After the robot’s AI chooses the ideal spot for the vaccine, it makes contact with Lasswell’s arm, delivering the vaccine in the form of a brief, high-pressure jet of fluid — no needle required. Finally, it disposes of the used vaccine cartridge.

Why it matters: Cobionix believes its vaccine robot could deliver a host of benefits — healthcare workers wouldn’t need to be potentially exposed to viruses to vaccinate people, and even when there’s a shortage of trained staff, people could still get their shots.

Cobi’s system might also be able to minimize an adverse reaction called “Shoulder Injury Related to Vaccine Administration” — it occurs when a worker delivers a vaccine too high on a patient’s arm and can cause pain and long-term mobility loss.

Dr. Robot: Lasswell told New Atlas he expects Cobi to reach the healthcare market in about two years — but Melody Butler, executive director for the nonprofit Nurses Who Vaccinate, is skeptical that the public will be ready to accept a vaccine robot by then.

“Right now, it’s really dependent on the user to allow the robot to administer the vaccine to them,” she told Fast Company. “This would be fine for someone who is trained, and gets regular shots. But I’d be hesitant to use this now for a mass vaccination campaign because each individual would require education [first].”

The next steps: If Cobi can win over the public, the machine could do way more than administer vaccines. Lasswell told Fast Company it has the software needed to perform other procedures, such as ultrasounds or blood draws, which currently require trained technicians or phlebotomists, when equipped with the right tools.

“Our initial robotic platform is probably overkill in terms of what we’d need from hardware and software to give vaccines,” he said.

The big picture: Even if autonomous robots like Cobi aren’t performing medical procedures in the near future, that doesn’t mean they can’t be useful in healthcare — we’ve already seen some AI bots tackle less-invasive hospital tasks, such as room sterilization and food delivery.

We’ve also seen remote-controlled robots used as avatars for healthcare workers. This has allowed them to interact with patients without exposing themselves to viruses — something that’s been hugely beneficial during the pandemic. 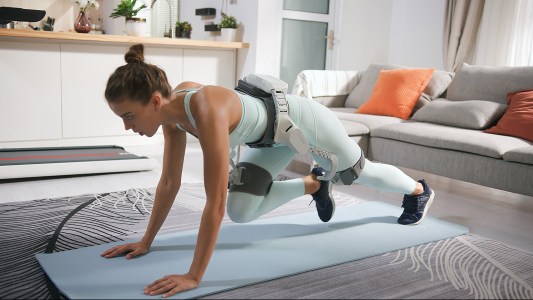 Enhanced Robotics is selling a powered exoskeleton to help people achieve their fitness goals, and it doesn’t cost thousands of dollars.

Robotics
Powered exoskeletons may be the ultimate fitness machines
By Kristin Houser
Subscribe to Freethink for more great stories
Subscription Center
Sections
Video
Freethink
Subscribe
We focus on solutions: the smartest people, the biggest ideas, and the most ground breaking technology shaping our future.
Subscribe