A recent Scientific American article by Maryn McKenna puts the spotlight on another infectious disease threat to humanity, one taking advantage of the havoc wreaked by SARS-CoV-2.

Despite killing over a million people a year worldwide, we have little recourse when it comes to fungal infections, McKenna writes, and the experts she interviewed are concerned. Deeply concerned.

“We have an enormous blind spot,” Arturo Casadevall, a molecular microbiologist and physician at Johns Hopkins, told McKenna. “Walk into the street and ask people what are they afraid of, and they’ll tell you they’re afraid of bacteria, they’re afraid of viruses, but they don’t fear dying of fungi.”

Among the fungal infections on the rise is Valley fever. A human vaccine trial against the fungus failed miserably in the 1980s, leaving the pipeline bereft. But now, researchers are hoping another Valley fever vaccine — this time in dogs — may provide the spark and groundwork we need to try again.

Welcome to the Valley: Valley fever is caused by fungi called Coccidioides immitis and Coccidioides posadasii; these “thready and fragile” fungi, as McKenna describes them, can be kicked up when dirt is disturbed, borne on the wind for hundreds of miles.

According to the CDC, symptoms of Valley fever can include the aforementioned fever, fatigue, shortness of breath, headache, aches and pains, rash, and night sweats; at its most severe, Valley fever can choke off the lungs, and in rare occasions even reach the brain and spinal cord.

Torrence Irvin was one such case. Irvin suffered “shortness of breath, night sweats, and weight loss similar to a cancer victim’s,” McKenna reports; by the time Valley fever was diagnosed, his lungs were operating at just 25% capacity.

“I was a skeleton,” Irvin told McKenna. “My dad would come visit and sit there with tears in his eyes. My kids didn’t want to see me.”

Valley fever is most common in California, Arizona, and parts of Nevada, New Mexico, and Texas, where it infects at least 10,000 to 15,000 people a year, although that’s likely a lowball estimate.

Which may explain what happened to Rob Purdie, who struggled against the disease for eight years before it was diagnosed. “I was probably out doing yardwork,” Purdie told Kaiser Health News, “and took the wrong breath.”

Valley fever cases have been steadily rising, and the fungus is predicted to spread further north throughout the West Coast as climate change warms the country. The CDC reports the fungus has already been found in south-central Washington.

So, while prevention would seem to be the best answer, vaccine development has its own issues. Namely, the cost of developing one likely isn’t worth it to pharmaceutical companies.

“We don’t compete effectively against other investment opportunities,” John Galgiani, head of the University of Arizona’s Valley Fever Center for Excellence, told KHN.

But Galgiani and other researchers are hopeful that a Valley fever vaccine for dogs may lay the groundwork for another human candidate.

At least twice as many dogs as people get Valley fever in Arizona alone; according to KHN, it’s estimated that 60,000 dogs catch the disease in the “Valley fever corridor” between Phoenix and Tucson.

The University of Arizona is leading the charge on a dog vaccine, bolstered by $4.8 million from the NIH and donations from dog lovers.

In development for years, the Valley fever vaccine is based on a mutated fungal spore called delta-CPS1, the Bakersfield Californian reports. The mutant spore has had its pathogenic gene snipped out, meaning it won’t make animals sick as it seeks to induce an immune response.

Researchers, including Galgiani, told KHN that the canine Valley fever vaccine may be available as soon as this year.

The dog vaccine is promising for a number of reasons. First, the caseload is much greater. “Many of my clients’ dogs have valley fever. The emotional and economic costs are enormous,” Janet Galante, a professional dog trainer, told the Californian.

And, because a dog vaccine would only need approval via the USDA, not the FDA, the approval process is much less onerous.

“The regulatory process is very similar to humans, but it is a lot more condensed for animals,” Kwansun Ahn, then-CEO of veterinary pharma startup Anivive Lifesciences, told the Californian in 2017. Anivive is providing commercial assistance for the vaccine.

In lab mice made to be vulnerable to the fungus, the vaccine provoked a strong immune response, creating the T cells needed for long-lasting protection, McKenna reported. Vaccinated mice challenged with the fungus survived for at least six months and, when autopsied, showed zero signs of fungal infection — meaning it didn’t just prevent symptomatic disease.

While these are the most promising results since the 1980s, it’s a long way to go from mice to dogs to people.

The cold water: A previous Valley fever vaccine for humans resulted in little more than sore arms; another sputtered out when the investment capital ran dry. But researchers are still hopeful that a proven dog candidate can accelerate development of a human version.

“It’s hard to offer any promises, but it could take less than 10 years.”

Any human vaccine would need to clear the FDA, of course, and since there’s never been an approved fungus vaccine, there’s no previously established path to clinical use.

“We would be flying the plane and building it at the same time,” Galgiani told McKenna.

Human trials are years — and millions of dollars — away, but as Valley fever’s eightfold increase of the past two decades has shown, the need may soon be much more urgent.

“It’s a strategic decision to go to dogs first,” Galgiani told the Arizona Daily Star. “We will see if it’s harmful for dogs, see if it works. … It will make the momentum to go to humans that much stronger.”

Editor’s note: This article was updated on June 11 to reflect that Kwansun Ahn was Anivive CEO at the time of his quote to the Bakersfield Californian, in 2017; he is no longer the CEO. 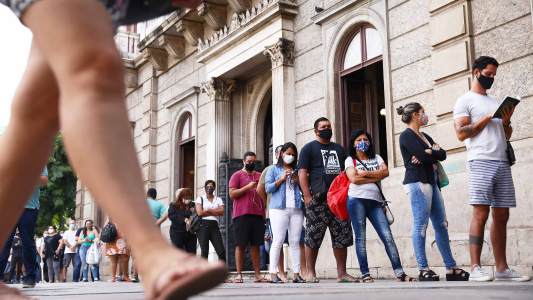 A mass vaccination experiment in Brazil suggests that even a moderately effective vaccine can have a dramatic effect if enough people get the shot.

Coronavirus
Mass vaccination experiment was a huge success in Brazil
Subscribe to Freethink for more great stories
Subscription Center
Sections
Video
Freethink
Subscribe
We focus on solutions: the smartest people, the biggest ideas, and the most ground breaking technology shaping our future.
Subscribe