Genetic diseases were thought to be incurable — letters carved in stone (or on a double helix). But gene therapy could change all that.

From treating Duchenne muscular dystrophy, autism, or glaucoma, there has been a surge in the news surrounding gene therapy (type “gene therapy” into the Freethink search tool, and you’ll see endless stories about medical breakthroughs).

The total number of completed or ongoing gene therapy clinical trials reached 4000 in February 2020. This type of treatment is on its way toward addressing some of the most severe and complicated ailments known to man. Gene therapy even shows promise for treating diseases like cancer or Huntington’s disease — longstanding mysteries of medical science.

What Is Gene Therapy?

Instead of using medications or surgery, doctors can use gene therapy to fight diseases at their source. Gene therapy attempts to cure a disease, or boost the body’s ability to combat a disease, by replacing a defective gene or adding a new gene.

The success of gene therapy all hinges on the ability to deliver that precious genetic cargo into the patient’s cells safely. To do that, scientists use a “vector” as a delivery vessel for the genetic material. In most cases, that vector is a virus.

We don’t typically think fondly of viruses. Usually, they don’t enter the human body to help. Instead, viruses like the flu or coronavirus make humans sick by inserting their genetic material into human cells and hijacking them. The cell reads the viral DNA (or RNA) and produces virus offspring, infecting other cells, repeating the process.

But, since viruses naturally deliver genetic material into a human cell, they are the most widely used vectors in gene therapy.

Scientists engineer an unwitting virus to act as a vector to deliver a therapeutic genetic payload. They strip the virus of its own genes and replace it with new genes. Once the virus transports its genetic cargo into tissues, the altered genes get to work — producing further instructions to treat the disease.

But the human body can recognize the virus as a foreign invader and launch an immune response — attempting to target and reject the virus.

Enter the adeno-associated viruses (AAV) — a small virus that has emerged as the most promising platform for gene therapy.

What Is AAV Gene Therapy and Why Is It Better?

These small, versatile viruses have several advantages over other gene therapy vectors.

First, despite their small size, they can carry a sizeable genetic payload. They are not known to cause many human diseases, and they can be designed to target particular types of cells or tissues. They cannot replicate on their own, so scientists can control how much gene therapy is delivered to the body.

The best part: they don’t trigger a very large immune response like other viruses. A gene therapy trial in the 1990s that used an adenovirus (a kind of cold virus, different from AAVs) caused a deadly immune overreaction in one patient  — and effectively ended gene therapy research in humans for a decade.

After that, researchers went back to the drawing board, looking for safer vectors. AAVs, because they don’t cause disease and can’t replicate, generally fly under the immune system’s radar. These characteristics make them perfect vessels for gene therapy. And clinical trials have since shown that AAV gene therapy is safe and, for some diseases, effective.

Now that AAVs are established as gene therapy vectors, scientists are working to improve their delivery and create the next generation of AAV gene therapy.

But there are challenges to overcome. Because AAVs are viruses that people are naturally exposed to, many people have already developed antibodies against them. When a patient who has been previously exposed to an AAV receives AAV gene therapy, these antibodies could block the therapy.

Recently, a team of researchers figured out how to cloak the AVV to sneak past the immune system and deliver its gene therapy payload without triggering any immune response.

With the recent surge in AAVs as viral vectors and more clinical studies in the pipeline, we can expect to see new gene therapies that are safe and effective. 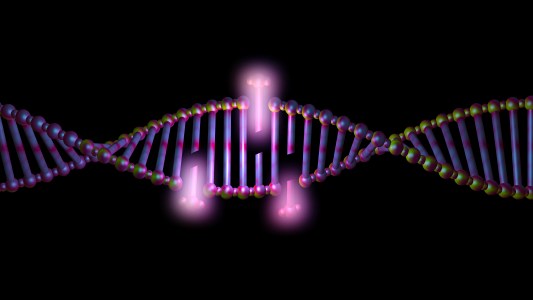 For the first time in a live animal, researchers have successfully reversed a gene mutation, called a “duplication mutation,” by gene editing.

CRISPR
Crispr fixes rare mutation for the first time in a live animal
Subscribe to Freethink for more great stories
Subscription Center
Challenges
Video
Freethink
Subscribe
We focus on solutions: the smartest people, the biggest ideas, and the most ground breaking technology shaping our future.
Subscribe