China’s “zero-COVID” strategy pursued for over two years is proving to be a double-edged sword, experts believe. A surge in new cases has already put 50 million people into lockdown — and it could get worse before it gets better.

The numbers: In February 2020, China reported about 3,000 new cases of COVID-19 per day, and, officially, that was about as bad as infections got in the nation. Over the next two years, it rarely reported more than 100 new cases a day.

(It’s worth noting here that the “reported” and “actual” numbers likely differ).

So, why is China experiencing its highest case numbers now?

Zero-COVID: When the pandemic began, a handful of nations, including China, New Zealand, and Australia, enacted zero-COVID policies. These were focused on eliminating the virus through strict lockdowns, mass testing, contact tracing, strictly controlled borders, and more.

Over the next two years, nearly every major zero-COVID nation abandoned the strategy after determining it wasn’t possible to completely stamp out the coronavirus — we were going to have to learn to live with it, one way or another — and because highly effective vaccines had reduced the threat of severe disease.

The lone holdout has been China, and it’s approaching the new wave of infections — which includes 28 of its 31 provinces and regions — with the same extreme policies, locking down more than 50 million people.

“China has a population that’s very vulnerable to this new variant.”

Vulnerable population: China’s zero-COVID policy has no doubt been a major contributor to its low case numbers thus far, but residents’ lack of exposure to past coronavirus waves may be hindering their ability to ward off Omicron, the variant now dominating.

“China has a population that’s very vulnerable to this new variant,” former FDA commissioner Scott Gottlieb told CNBC. “This is a much more contagious variant, it’s going to be harder to control, and they don’t have a population that has natural immunity.”

While nearly 90% of China’s population is vaccinated, most received inactivated vaccines by Chinese developers Sinopharm and Sinovac. Those shots were never as effective as the mRNA vaccines used elsewhere in the world, and research suggests they’re even less effective against the Omicron variant.

And despite high overall vaccine numbers, the most vulnerable groups in China actually have among the lowest vaccination rates. According to the Financial Times, less than half of people over age 80 in mainland China are fully vaccinated, even with the weaker inactivated vaccines.

Looking ahead: If China were to finally approve one of the effective mRNA vaccines — like it appeared poised to do in July 2021 — or get its own mRNA shot across the finish line, it might have a better chance of preventing this wave of cases from becoming a tsunami of hospitalizations.

For now, though, Beijing appears determined to stay the course with the vaccines it has and the same policies it has pursued over the past two years.

“The frequency of outbreaks has clearly risen, the number of people infected has grown rapidly, and the affected area has kept expanding,” Mi Feng, a spokesperson for China’s National Health Commission, told reporters on March 15.

“We must adhere to and not waver from the general strategy to prevent imported cases and internal rebounds, and the general policy of dynamic zero-COVID,” he continued.

Medicine
Seven science and tech breakthroughs you may have missed this year
A roundup of major science and tech achievements that flew under the radar in 2022, including new vaccines, advanced solar cells, and more.
By Kristin Houser
Up Next 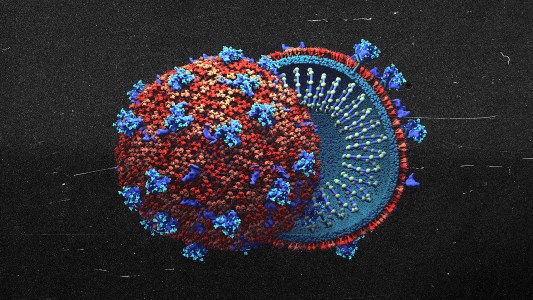 HIV replication continues even when infected cells shut down. New research shows how.