Humans have been trying to keep various pests outside of our food supplies and fields since agriculture began. Among those eating away are the beetles, those highly successful insects — at around 350,000 species and counting, the Smithsonian pegs them as the largest group of animals on Earth.

But one possible key to that success may help us fight them, without the need for traditional pesticides: their unique kidney function.

That’s right. Researchers want to protect food supplies by getting beetles to pee themselves to death.

The problem with pesticides: Chemical-based pesticides can cause biodiversity loss, as well as damage to the environment and human health.

Couple that with rising pesticide resistance, and the race is on to find new methods of pest control that don’t rely on chemical means.

“The urgent need for a more sustainable and ecological approach has produced many innovative ideas,” researchers wrote in Frontiers in Public Health.

I’m pretty sure they weren’t thinking about death by urination, but it is innovative.

Urine trouble, beetles: Researchers at the University of Copenhagen have been studying how beetles regulate their salt and water balance, a crucial aspect of survival.

Perhaps one key is the beetle’s unique way of maintaining that balance. They do this by releasing special hormones that control urine production, the researchers write in PNAS. Those hormones attach themselves to special cells in their excretory system, in an architecture unique to beetles.

That uniqueness makes their water regulation an attractive pesticide target.

“Today’s insecticides go in and paralyze an insect’s nervous system. The problem with this approach is that insect nervous systems are quite similar across species,”  Kenneth Veland Halberg, an associate professor in the department of biology, said in a release.

“Using these insecticides leads to the killing of bees and other beneficial field insects, and harms other living organisms.”

With the beetle’s water balance method in hand, we may be able to craft compounds which are close enough to their natural hormones that we “can cause beetles to form so much urine that they die of dehydration,” Halberg says.

While it sounds a bit outlandish, people have long understood a beetle’s water balance is important to its survival. According to the researchers, ancient Egyptians would store pebbles in their grain to combat beetle infestations.

The rocks would scrape away the insect’s waxy outer layer. That covering helps them keep water; nick it, and you can throw their water system out of whack.

“Never mind that they chipped an occasional tooth on the pebbles, the Egyptians could see that the scratches killed some of the beetles due to the fluid loss caused by damage to the waxy layer,” Halberg says.

Still work to go: The Copenhagen team’s research is just beginning; don’t expect to have a deadly beetle diuretic on store shelves soon.

“Understanding urine formation in beetles is an important step in developing more targeted and environmentally-friendly pest controls for the future,” Halberg says.

“While it may seem (…) slightly vicious, there’s nothing new in us trying to vanquish pests that destroy food production,” Halberg says.

“We’re simply trying to do it in a smarter, more targeted manner that takes the surrounding environment into greater account than traditional pesticides.” 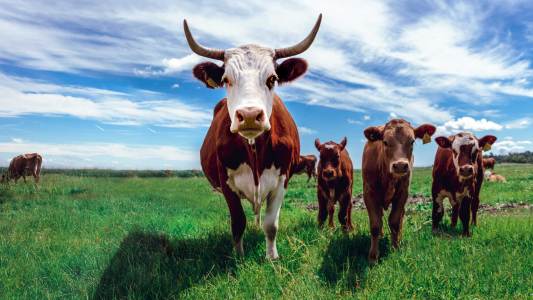 Researchers found that feeding dairy cows just a touch of seaweed dramatically lowered the amount of methane emissions they released.

Agriculture
A seaweed diet could eliminate most of cows’ greenhouse emissions
Subscribe to Freethink for more great stories
Subscription Center
Sections
Video
Freethink
Subscribe
We focus on solutions: the smartest people, the biggest ideas, and the most ground breaking technology shaping our future.
Subscribe