But the study of brain organoids has limits: one big problem is that scientists don’t have the tools to study the mini-brains in three-dimensions. It’s kind of like only having an x-ray of the side of your head, instead of a 3D fMRI.

But now, researchers at Northwestern, the Shirley Ryan AbilityLab, and the University of Illinois at Chicago have created a 3D platform for studying brain organoids — a mini-lab for mini-brains.

“The advances spurred by this research will offer a new frontier in the way we study and understand the brain,” Colin Franz, an attending physician and research scientist at the AbilityLab, and study co-lead author, said in a press release.

“Now that the 3-D platform has been developed and validated, we will be able to perform more targeted studies on our patients recovering from neurological injury or battling a neurodegenerative disease.”

Bring on the Brain Organoids

Brain organoids have been grown in labs for decades. But more recently, as my colleague Teresa Carey has reported, lab-grown mini-brains have become sophisticated enough to produce brain waves.

Before brain organoids were advanced enough to form neural connections, they were mostly limited to modeling physical damage — e.g. the impact of the Zika virus on neurons.

But brain waves have opened the door to whole new realms of research.

“Brain organoids closely recapitulate many features and characteristics of in vivo brain tissue,” researchers from Yale and the University of Oslo wrote in a perspective piece for iScience. “This technology in turn allows unprecedented possibilities to investigate brain development and function in the dish.”

The researcher’s mini-lab, published in Science Advances, looks to further advance what researchers can learn from mini-brains.

“We No Longer Have to Compromise”

The brain organoid mini-lab looks something like a hybrid of a sugar waffle and a jellyfish, with a Mass Effect aesthetic. The system contains a suite of sensors and tools to study the mini-brains.

But studying it still leaves something to be desired.

The electrode arrays currently used for organoid cell cultures are 2D, making them incapable of matching the complex 3D structures of the brain. In other words, current research methods have a dimension missing.

“Now, with our small, soft 3-D electronics, the capacity to build devices that mimic the complex biological shapes found in the human body is finally possible, providing a much more holistic understanding of a culture,” Northwestern’s John Rogers said in the release. “We no longer have to compromise function to achieve the optimal form for interfacing with our biology.”

Rogers led technology development, drawing on tech similar to what you’d find in phones and computers.

The device includes the requisite electrodes for recording of the brain organoid’s activity, but it doesn’t stop there; there’s also a heating element, as well as oxygen sensors and LED lights. Those tools allow the researchers to keep the cells warm and happy, or, if they crank the heat up, put them under stress. And utilizing special photosensitive genes, they even have controlled neural activity using the LED lights.

Beyond Mice and Petri Dishes

“This is just the beginning of an entirely new class of miniaturized, 3-D bioelectronic systems that we can construct to expand the capacity of the regenerative medicine field,”  Yoonseok Park, co-lead author and postdoc fellow at Northwestern, said in the release.

The electrode arrays currently used for organoid cell cultures are 2D, making them incapable of matching the complex 3D structures of the brain. In other words, current research methods have a dimension missing.

Park offered the circuitry of brain-muscle interface and even the tissue of a beating heart as potential candidates for the mini-lab.

The team will now use the device to test drugs and therapies, tease out new insights into neurological diseases, and compare different brain organoids made from different subjects’ stem cells.

“As scientists, our goal is to make laboratory research as clinically relevant as possible,” Kristen Cotton, research assistant for AbilityLab’s Franz, said in the release.

“This 3-D platform opens the door to new experiments, discovery and scientific advances in regenerative neurorehabilitation medicine that have never been possible.”

Editor’s note: This story was edited on 3/29/21 to accurately reflect the researchers’ academic affiliations. Members of the team came from the University of Illinois at Chicago, not the University of Chicago. Also, a previous iteration of this story identified the Shirley Ryan AbilityLab as part of Northwestern University; it is not. 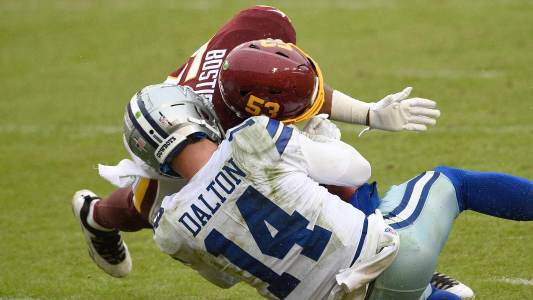 Saliva was used to diagnose concussions with 94% accuracy, suggesting that an objective concussion test may finally be within reach.

Sports
It's now possible to diagnose concussions with saliva
By Kristin Houser
Subscribe to Freethink for more great stories
Subscription Center
Sections
Video
Freethink
Subscribe
We focus on solutions: the smartest people, the biggest ideas, and the most ground breaking technology shaping our future.
Subscribe